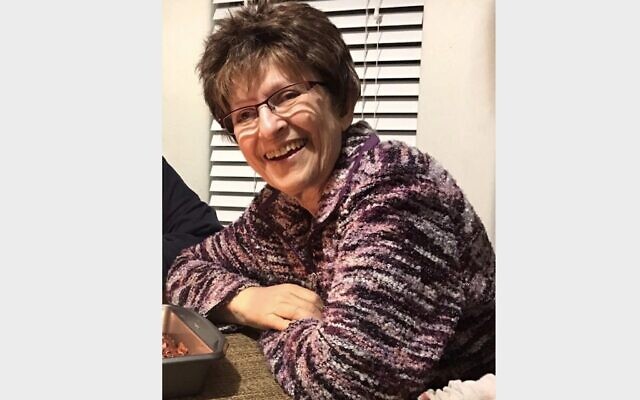 Adversity, perseverance and compassion — those are the three themes that come to Wendy Mars’ mind when she thinks of her sister, Elaine Hashimi, whose family and loved ones will be marking the first yahrzeit of her Sept. 13, 2020 death.

“My sister was Job,” Mars told the Chronicle. “You know all the bad things that can happen to you — being deaf, getting cancer — it all happened to her and it was tough to watch. But, through it all, she helped others.”

In addition to being a loving wife and mother, Hashimi, who lived in Phoenix, sheltered and nurtured others — like the developmentally disabled relative she welcomed into her home and counseled through his high school graduation.

Yosef Hashimi, Elaine’s son and a member of the board at Yeshiva Schools of Pittsburgh, thinks of another word when he describes his mother: empathy.

“My mom just wanted kids to reach their maximum potential and ensured, if they were challenged in any way, that their challenges weren’t ignored,” Yosef Hashimi said. “She never wanted children to feel left out — today people would call it ‘inclusion.’ My mom’s ethos was inclusion before that was a word used in the modern vernacular.”

After Elaine Hashimi’s death last year, her family helped establish the Elaine Hashimi Endowment Fund for Student Wellness at Yeshiva Schools of Pittsburgh, raising more than $200,000 for the cause.

The student wellness division launched at Yeshiva Schools at the beginning of the 2020-21 academic year, as students were struggling with the knotted realities of attending classes during the pandemic. The Hashimi family recently pledged an additional $100,000, as part of Yeshiva School’s upcoming capital campaign, to permanently name all wellness centers at the schools after their matriarch.

“There’s nothing that could be more meaningful to my sister than what they’re doing,” said Mars, who serves as an assistant dean at the University of Pittsburgh and sits on the board of the Jewish Healthcare Foundation. “She was my hero. She was just so smart and so kind. She was just everything good — she truly was.”

The student wellness division was not always at the front of Yeshiva School’s to-do list, according to Rabbi Yossi Rosenblum, whose August 2020 appointment as Yeshiva Schools’ CEO dovetailed with the development of a strategic plan at Yeshiva Schools. That plan “blends the traditions of the past with the needs of the future and goals of the new leadership team,” officials said. The plan — aiming to improve education there, among other measures — was undertaken by a 25-member committee of parents, academic staff and community members.

COVID-19, though, changed a lot of realities on the ground. With students facing psychological issues in light of the pandemic, Yeshiva Schools pushed the student wellness division concept “right to the front of the line,” Rosenblum told the Chronicle.

“We thought it was important and, a year later, we’ve proven that it is important,” he said. “We’re trauma-sensitive and trauma-informed … and year two will be even better than year one.”

The new student wellness division focuses on “the nitty-gritty” of day-to-day student health, according to Dani Saul, a psychologist with four children at Yeshiva Schools, who helped develop the wellness program.

“We wanted to make sure we were doing the best we could,” Saul told the Chronicle. “It’s behavioral health awareness, identifying at-risk students, talking with kids about IEPs (Individualized Education Programs), doing internal assessments — just working to create a well-rounded wellness division.”

“It kind of builds on everyone’s ideas of what we could do to build a wellness division,” he said, “and that obviously starts with a wellness director.”

Dr. Madeline Nassida is that director. A licensed psychologist, Nassida leads five master’s level interns from Carlow University and Chatham University who provide counseling to students. In addition to focusing on student counseling, her work includes special education needs, student services and providing learning support for children with diagnoses such as attention deficit disorder, she said.

“It’s almost like an outpatient mental health clinic — just in school,” she said.

Elaine Hashimi understood what it’s like to face challenges as a child, her son said. Around age 2 or 3, she lost most of her hearing.

“She refused to learn sign language,” Yosef Hashimi said. “So she learned to lip-read. If you weren’t looking at my mom, she didn’t understand you. She didn’t understand what you were saying. And being deaf is a very lonely existence. But she also was an advocate, as technology improved, for using technology for the hearing impaired.”

Several years ago, Yosef Hashimi’s young daughter was diagnosed with cancer and also lost some of her hearing — two battles very familiar to her grandmother. But Yosef Hashimi points to another example to illustrate his mother’s sense of compassion. In elementary school, though Yosef was great at math, he struggled with timed reading tests. His mother met with his teacher and asked for an exception: Stop the timing. Yosef’s reading instantly improved.

“My mom went and advocated on my behalf,” said Yosef Hashimi, his voice sort of trailing off. “She didn’t welcome struggle.”

Now, in her memory, a generation of Yeshiva School students won’t struggle without assistance, either. PJC