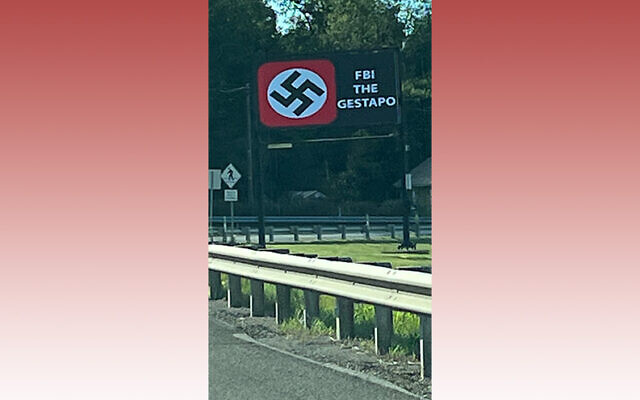 “The swastika is the most prominent form of antisemitism, and it should never be displayed like that,” James Pasch, ADL. Photo by Armstrong County Resident.

John Placek said he didn’t mean to offend anyone when he created two signs featuring a Nazi flag — nor does he think anyone should be offended.

The business owner created the signage on two billboards he owns along Route 422 in Worthington, Pennsylvania, approximately 45 miles outside of Pittsburgh. On the left side of each digital billboard is the Nazi flag, featuring a swastika; on the right, the words “FBI The Gestapo.”

“It’s the opposite of what you’re thinking,” Placek told the Chronicle. “Because what I did was, that represents Nazi-ness. The FBI raided the former president of the United States just like the Gestapo and the German government back in World War II.”

Placek said his goal is to let people know that he disagrees with the FBI executing a search warrant at Donald Trump’s Mar-a-Largo residence.

“In my mind, they’re equivalent,” he said. “I know you don’t want to hear this. What happened to the Jewish people, it was criminal. You’re talking to an old colonel from the Army. I served 22 years defending the Constitution of the United States of America. I’m pro-Israel and everything. I’m not anti-Jewish, but I was trying to make a statement that you can’t just go and do that to people.”

He went on to say that the rights of the American people are being destroyed.

Asked if he was attempting to compare the murder of 6 million Jews during the Holocaust to what he viewed as an erosion of Americans’ rights, Placek responded: “I’m not saying that all. The Holocaust was one of the major tragedies of all time. I understand that. But in my mind, what’s going on in our country is equivalent. I know you don’t want to hear that. It’s not a popular view, I understand that, but we have to learn from what happened 70 years ago.”

Placek noted that he wasn’t alive when the Holocaust took place.

“I didn’t do it,” he said. “I feel bad about it. It’s the most horrendous hate that a man can do to another person, but I wasn’t there. You weren’t there. And now we have to deal with today’s world. The world is running amok.”

Following the 2019 acquittal of former East Pittsburgh Police Officer Michael Rosfeld in the fatal shooting of Antwon Rose II, Placek displayed photos of both Rosfeld and Rose with the message: “Legal System Works, Justice Served, Get over it.”

Another sign featured Placek’s photo and the words “I’m white and Proud of it!”

The owner of both a gas station and pool company, Placek lost his Sunoco affiliation following the Antwon Rose controversy.
At the time, officials at Sunoco tweeted: “These offensive billboards are unacceptable and do not represent our values and beliefs in any way.”

Interviewed by the Tribune-Review in 2019, Placek said he intended to spark debate rather than impassion hate, and he was defiant.

“I will not bend, I will not give in,” he told the Tribune-Review then. “They can take my business. They can do whatever the hell they want. I don’t care. I’m going to stay focused. I’m going to perform God’s work. God wants us to be united.”

An Armstrong Country resident who frequently drives past the signs, and asked that their name not be used in this article because of safety concerns, is concerned.

“It started when he promoted terrible things about Antwon Rose … and he’s continued to do stuff like this,” they said.
The resident, who isn’t Jewish, said they were disturbed by some of the language used in the billboard messages, which are digital and display different images on a loop.

“Others read, ‘God will abort Democrats’ and ‘F— JB.’ That’s swear words. Kids drive past there. It’s not appropriate,” the resident said.

Laura Cherner, the Jewish Federation of Greater Pittsburgh’s Community Relations Council director, said the Federation is aware of the signs and has been in contact with law enforcement.

“Antisemitism has no place in Pittsburgh or anywhere and seeing this symbol displayed so prominently is gut-wrenching,” Cherner said. “The Jewish Federation continues to combat antisemitism, and we encourage community members to continue to report antisemitic incidents to our community security team.”

For Placek, a swastika on a billboard does not stand for 6 million Jews murdered by the Nazis.

“That symbol may be part of what happened to 6 million people, but that symbol means more than that,” he said, before acknowledging that for many, the Nazi flag is simply a symbol of hate.

“And I hate the government for doing what it did. You got my message,” he said.

The controversy hasn’t deterred Placek from his mission. He recently purchased two more signs and is planning to display his messages on all four billboards soon. PJC