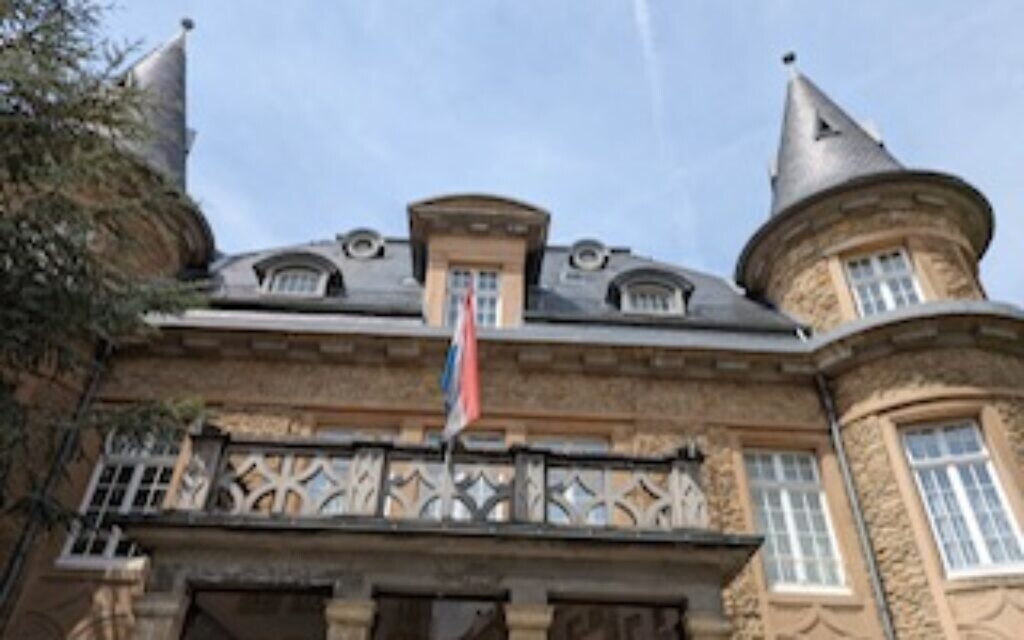 Outside of Villa Pauly in Luxembourg City. Photo by Madison Jackson.

Red, green and blue block letters greet us as we leave the baggage claim area. WELCOME TO LUXEMBOURG, the homemade paper sign reads. Grasping hold of the sign with one hand each are two curly-haired girls waving and smiling. They look in my direction, and I look at them — and without any introductions we know each other. I couldn’t have asked for a sweeter welcome to Luxembourg City.

Global Jewish Pen Pal Dani and her girlfriend Maya excitedly lead us to a bus outside the airport. Public transportation is completely free in Luxembourg.

On the trip to Dani’s parents’ house, we quickly learn a lot about Dani and Maya. Dani is a master’s student studying journalism in Brussels, Belgium. Maya is doing a residency after medical school in the emergency department of a Belgium hospital. They met, and now live, in Moishe House Brussels, part of an international network of homes that serve as hubs for young adult Jewish communities. Each month, Dani and Maya, along with two other Moishe House Brussels residents, plan several events for local Jews in their 20s. Dani returns to Luxembourg City often, the place where she grew up, to visit her parents.

After a nice, home-cooked lunch with Dani’s parents, we set out to tour a city like I have never seen before. Luxembourg is so green. I could not stop commenting on the vast number of trees, valleys and other beautiful features of nature I saw everywhere.

On Friday morning, we headed to the Deportation Memorial. We had arranged to meet with Marc, an employee of the Shoah Foundation in Luxembourg, who would show us around the exhibit since the displays were not in English.

It turned out the memorial was not for the Luxembourgish Jews who were deported during the Holocaust. While still important history to learn and remember, this memorial at the train station in Hollerich served as one of the main gathering sites and departure points for young Luxembourgers forced to join the German labor service and the German military service during the Nazi occupation of Luxembourg. It isn’t often the memorial receives visitors.

Marc appreciated the chance to show us around. He went out of his way to show us the Luxembourg train station from which Jews had been deported to ghettos and concentration camps, and then Villa Pauly, where he works. 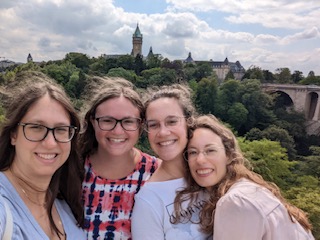 Villa Pauly was a spur-of-the-moment addition to our itinerary. I had not heard of it before; it had never come up in any of my research prior to the trip — which was crazy. Villa Pauly served as the headquarters of the Gestapo, the secret police of the Nazi regime, during the Nazi occupation of Luxembourg. Why was this place not well known? It struck me that — compared to other cities I visited — Luxembourg began commemorating its Jewish Holocaust victims much later. For instance, a plaque was placed outside Villa Pauly in the 1980s to commemorate the Luxembourgish victims of World War II, while a plaque for Jewish victims wasn’t put up until 2012.

Villa Pauly was originally built in 1923 as a mansion in the center of Luxembourg City for surgeon Dr. Norbert Pauly. It later became the place where the Jewish Council of the city was forced to meet with the Nazis to implement new rules for the community, and, in the basement, there were torture cells for Jews. To walk in that building and stare at the very floor where the Nazis had stood was eerie, to say the least.

The next day, after attending Shabbat services at Consistoire Israélite de Luxembourg, an Orthodox synagogue — and the only synagogue in Luxembourg City — we were invited to Shabbat lunch at Rabbi Alain Nacache’s house. Nacache is the chief rabbi of Luxembourg and the rabbi at the Orthodox synagogue. We walked with Nacache, Dani, two of the rabbi’s sons and one of the sons’ friends to the house. The neighborhoods we passed during our 15-minute walk from the synagogue reminded me of walking through the streets of Jerusalem on a Shabbat afternoon.

I was shocked by some qualities of the family that seemed to me uncharacteristic of Orthodox families. The rabbi’s daughters wore pants and did not go to synagogue — but they were clearly very knowledgeable and into the singing portion of the afternoon. He let them choose songs that we sang, and while I didn’t recognize all of them, the Sephardic tunes that were part of his family were beautiful.

The family spoke French. They had a pet dog that roamed around our feet as we ate. After hamotzi, the rabbi hilariously started throwing pieces of challah at people around the table instead of passing a plate around with slices. Like any Shabbat meal I have attended anywhere in the world, though, the food and good times kept coming.

As we left the rabbi’s house and walked toward the Old Town of Luxembourg, I couldn’t help but reflect on my experience that morning. Inside the synagogue, Dani had shown us a picture that was sitting around from her time in the Jewish Scouts. Although she has moved away from home, Luxembourg will always hold a special place in her Jewish identity. Sure, she prefers egalitarian spaces. Sure, she never had a bat mitzvah growing up in Luxembourg. But nonetheless, Dani is a face of the Luxembourg Jewish community. She knows everyone and everyone knows her.

Hanging out with Dani was easy. As we hugged goodbye that evening, she was already making plans to come visit me in Pittsburgh. I can only hope to sometime soon have the opportunity to show some of the Global Jewish Pen Pals I have met on this journey my own country. PJC