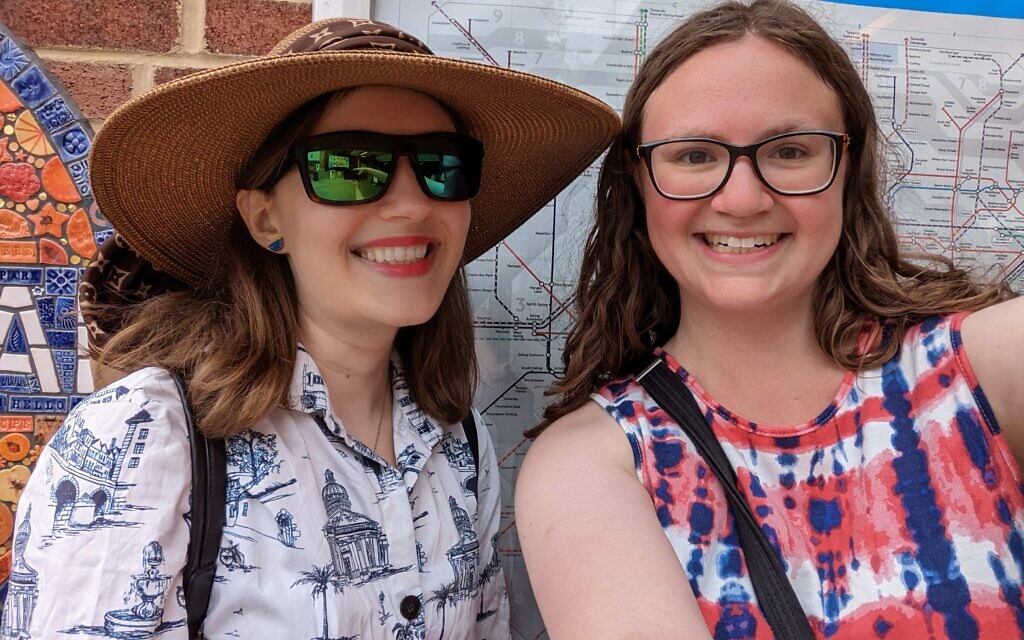 Madison Jackson is a graduate student at the Chatham University MFA program in Creative Nonfiction Writing and is the founder and executive director of the Global Jewish Pen Pal Program, which matches Jews from around the world as pen pals to help people learn about Jewish life in other countries. She is traveling throughout Europe this summer and writing about Jewish life in diverse locations.

I’m waiting outside the West Hampstead tube station, conspicuous in my red, white and blue dress. It’s July 4th, and I am dressed to represent my country, even while across the ocean in England. The irony is clear.

A young woman approaches me, wearing a white dress with blue symbols of London covering it from top to bottom. She is also wearing a large, tan hat, dark sunglasses and red lipstick. Instantly I recognize Global Jewish Pen Pal Ashley from the photo she sent me that morning.

We are meeting in North London, the area where most of the city’s Jewish community lives. Before coming here, I pictured the area as small and closely connected. Instead, the towns with significant Jewish populations such as Borehamwood, Finchley, Bushey, Golders Green and West Hampstead seem to be spread out.

As we walk past Roni’s Bagel Bakery and Café, an Israeli bakery where Ashley buys fresh challah every Friday before Shabbat, she tells me about the Liberal Jewish Synagogue she attends, which she says is “progressive.” She joins services there every Shabbat, usually over Zoom, but she also tries to attend in person at least once a month.

“They project the words to all prayers on the wall of the synagogue, which is amazing,” she tells me.

Ashley explains that while most of the people attending services in person are Londoners, since they began being broadcast on Zoom, people have been joining in from all around the world. “My pen pal, Marina, in New York City and I have attended Shabbat services at each other’s synagogues over Zoom,” she says.

Ashley, 28, discovered she was Jewish when she was 14, while living in California. She overheard a conversation between her mother and her grandfather’s ex-wife. It turned out her grandfather was Jewish and had kept that a secret after surviving the Holocaust. Ashley wanted to know more. She researched her family history and began engaging in Jewish cultural life as much as she could, but didn’t formally convert to Judaism until after her grandfather passed away and she moved to England.

She thought there would be something romantic about returning to Judaism in the continent where her grandfather was from, something fulfilling about becoming Jewish in the place where her Jewish ancestry had started. After escaping Germany during World War II, her grandfather first made his way to England.

I tell her how growing up knowing I was Jewish from birth, I sometimes felt like I took my religion for granted. But coming to Europe and meeting Jewish people who had to make an active choice to practice Judaism, where often it was the children teaching Jewish customs to their parents, I was inspired to delve deeper into why I believe the things that I was taught to believe.

Ashley says that while she enjoys being Jewish in the U.K., sometimes she wishes for the Jewish atmosphere prevalent in places like California or New York.

“Jews in London can feel quite lonely,” she says. “Most stores don’t even sell generic Hanukkah cards, or a menorah or gelt during Hanukkah. It is not like in the States where you can buy Hanukkah decorations in any store during the season.”

Prior to arriving in London, I thought I wouldn’t feel comfortable wearing my Jewish star necklace around the city. But one morning I cautiously placed my necklace around my neck, deciding to test the waters — and everything was fine.

The U.K. experienced a record high of antisemitic incidents in 2021, according to the U.K.’s Community Security Trust, so some people told me to expect lots of security at Jewish institutions in London. At the Jewish Museum in London there was one security guard outside the building. He looked in my purse before I entered. At Westminster Synagogue, where I went on a tour of the Czech Memorial Scrolls Museum, there was one guard inside the building, but he didn’t look in my bag or ask me any questions. At the Jewish Community Center JW3, there was a guard who asked why we were coming there, but that was all. Anyone could walk into the building. The level of security didn’t seem to be that different than what we experience in America.

I am grateful for the conversation I had with Ashley as we walked around the area of London which has become her home. I look forward to meeting more Jewish pen pals, and learning about Jewish life in other European cities, as I continue to the next stop in the Global Jewish Pen Pal Program Europe Tour. PJC