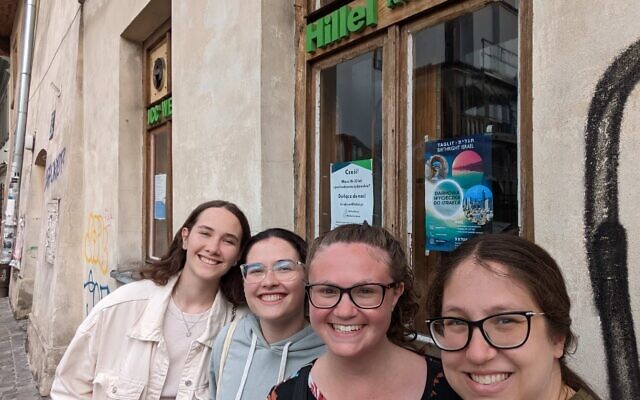 It’s 6:20 a.m. and after our first overnight bus on the tour, I am in a daze. Deanna and I enter a small, crowded bus station, heading directly for two empty blue bench seats in the waiting area. I notice the only food in the bus station: an obwarzanek stall.

In Krakow, obwarzanek is a popular street food, the closest you can get to a bagel in Poland. It is larger than a bagel and twisted. The topping options are sesame, poppy seed or occasionally asiago. I remember — with not much nostalgia — the first time I tried obwarzanek four years ago when I lived in Warsaw for the summer and visited Krakow. It was hard and chewy and took a long time to swallow, and I can’t say I’ve missed it. But it is a Krakow staple and so I ask Deanna if she would like one.

We soon make our way to Mariia’s apartment, a seven-minute walk from the bus station. Mariia is the 23-year-old Global Jewish Pen Pal hosting us in Krakow. I love Poland, but Krakow is not my favorite city. I hope that spending time with a pen pal who is an active leader of Hillel Krakow, a Jewish student group, will change my perspective of the city this time around.

We find the courtyard which centers Mariia’s apartment building, and she greets us from a window on the second floor. She waves down at us smiling, pointing to the entrance.

“Are you hungry? I will make you breakfast,” Mariia says instantly.

We sit in her living room and watch as she pulls items out of her refrigerator and sets them on the counter. She prepares broccoli omelets, toast and cherry tomatoes. She brings us tall glasses of coffee with caramel syrup and then tells us she is going back to bed for a bit.

Mariia is a Ukrainian Jew who has lived in Krakow for seven years. Originally from Dnipro, Ukraine, Mariia is proud to come from the city with the Menorah Center, the largest Jewish Community Center in Europe. Recently, leaving behind the war in Ukraine, Mariia’s mom and younger sister Yeva joined her in Krakow. As is common for many Ukrainian refugees, her dad and brother still live in Ukraine.

As much as she loves Dnipro, Mariia also loves Krakow. She feels at home at Hillel Krakow the same way many Americans feel at home at their university’s Hillel. One evening during our stay in Krakow, Mariia and Yeva meet us outside the entrance to Hillel Krakow. It is a small, worn-down building from the outside, and when Mariia sees that one of its windows is open, she worries that someone broke in.

She has the keys to the place, and leads us inside where there is another set of locked doors, before we enter a small but cozy lounge. It reminds me of the lounge at my university, and the way student leaders were given the keys to the place. In the back is a bookshelf filled with Jewish books and games; in front of it sits a couch and a table with a TV. The room is decorated for Pride Month, and off to the side is a tiny kitchen where Mariia sets a pot of water to boil for tea.

Unlike in the United States, a Hillel in Europe is usually established for a city rather than for one university. All Jewish students in Krakow go to the same Hillel regardless of where they go to school. In fact, you don’t even have to be a student to attend Hillel events: Hillel Krakow is for people of Jewish descent between the ages of 18 and 30. The Jewish descent rule means that many participants only recently have discovered their Jewish roots, or perhaps only one parent or one grandparent is Jewish. In Mariia’s case, her dad is Jewish and her mom isn’t. Mariia prefers egalitarian, Reform spaces and is dating an American non-Jewish man.

We leave the Hillel and walk by a plaque on a nearby building which shares the history of a location which housed a Jewish school before World War II.

“It’s so beautiful,” Mariia says, pointing it out.

She has said this for many of the Jewish heritage signs and sites we have passed. I find it ironic that what she loves about Krakow is exactly what I don’t love about Krakow. Jewish life in Krakow seems fake to me. It is surrounded by a black gate with Jewish stars and non-Jews playing Klezmer music on the streets. Kazimierz, the Jewish quarter, is largely where Jewish life takes place in the city and feels unnatural. It’s so different from Warsaw, where Jewish life and organizations are spread across the city.