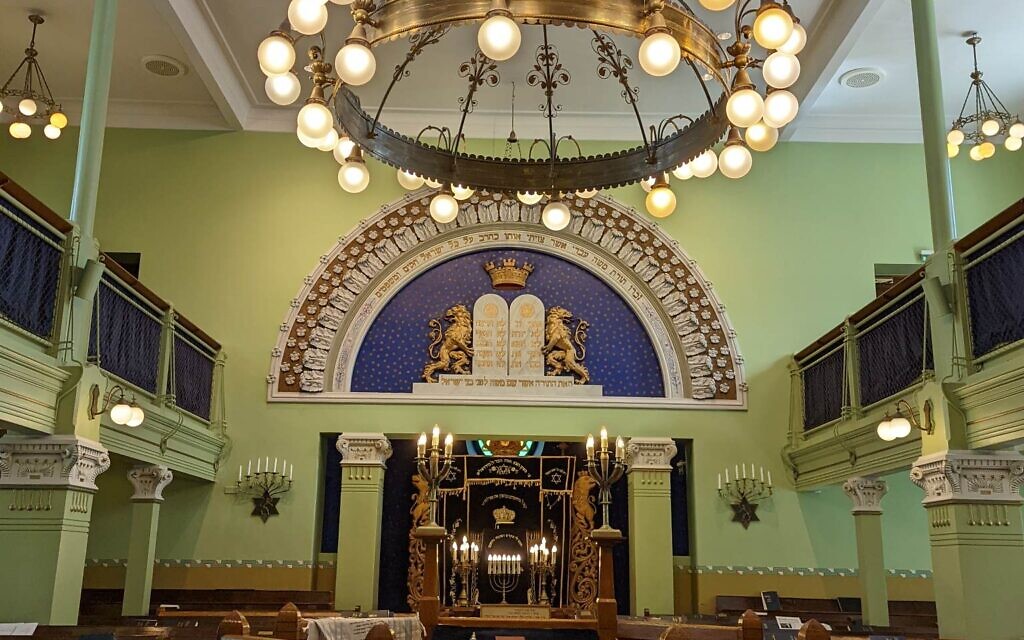 Sanctuary inside the Helsinki Synagogue. Photo by Madison Jackson.

“What time does Shabbat start tomorrow in Helsinki?” I ask.

Chana, the 25-year-old pen pal hosting me during my visit in Helsinki, Finland, walks from the hallway of her apartment to the living room. She picks up a large, paper wall calendar, like the Jewish calendars synagogues send me each year in the United States. Placing her finger on July 7, she replies, “10:22 p.m.” I ask when Shabbat ends. The answer is a time well after midnight.

I am surprised that Shabbat lasts longer than 25 hours. Chana explains that in most of the world, Shabbat ends when three stars are visible in the sky. But the Jewish community in Helsinki is one of the most northern in the world. As a result, in Finnish summers, there are no stars to be seen; it doesn’t get fully dark during Finnish summer nights. Instead of looking for three stars at the end of Shabbat, Finnish Jews follow the halachic hour — a term used in rabbinic Jewish law, where an hour is calculated by taking the total time of daylight of a particular day, from sunrise until sunset, and dividing it into twelve equal parts. The halachic hour varies by the season and sometimes by the day.

Chana isn’t the only Jew in Helsinki who follows the halachic hour as a guide. While there are approximately 1,300 Jews in Finland — mainly in Helsinki, with a smaller community in Turku — Chana is part of one of 10 families who call themselves “frum.” She wears a dress whenever she is out in public, strictly observes Shabbat and keeps kosher.

Each weekend Chana makes the 17-minute walk to Shabbat services at the Helsinki Synagogue. There is only one synagogue in Helsinki and it is Orthodox, yet most of its members do not identify as Orthodox. Many, in fact, are not religiously observant and identify simply as culturally Jewish.

A security guard wearing shorts and a simple T-shirt greets Chana as we walk up to the gates which surround the building on Wednesday. He doesn’t acknowledge me as they begin chatting in Finnish. He instantly opens the gate and waves us inside. He doesn’t check my bag or ask to see my passport. He knows Chana, and apparently that is good enough for him.

Chana leads me into the secretary’s office; I feel funny walking right into a room instead of knocking first. But it is clear from the way Chana walks that she knows her way around the synagogue, the place where she has grown up. 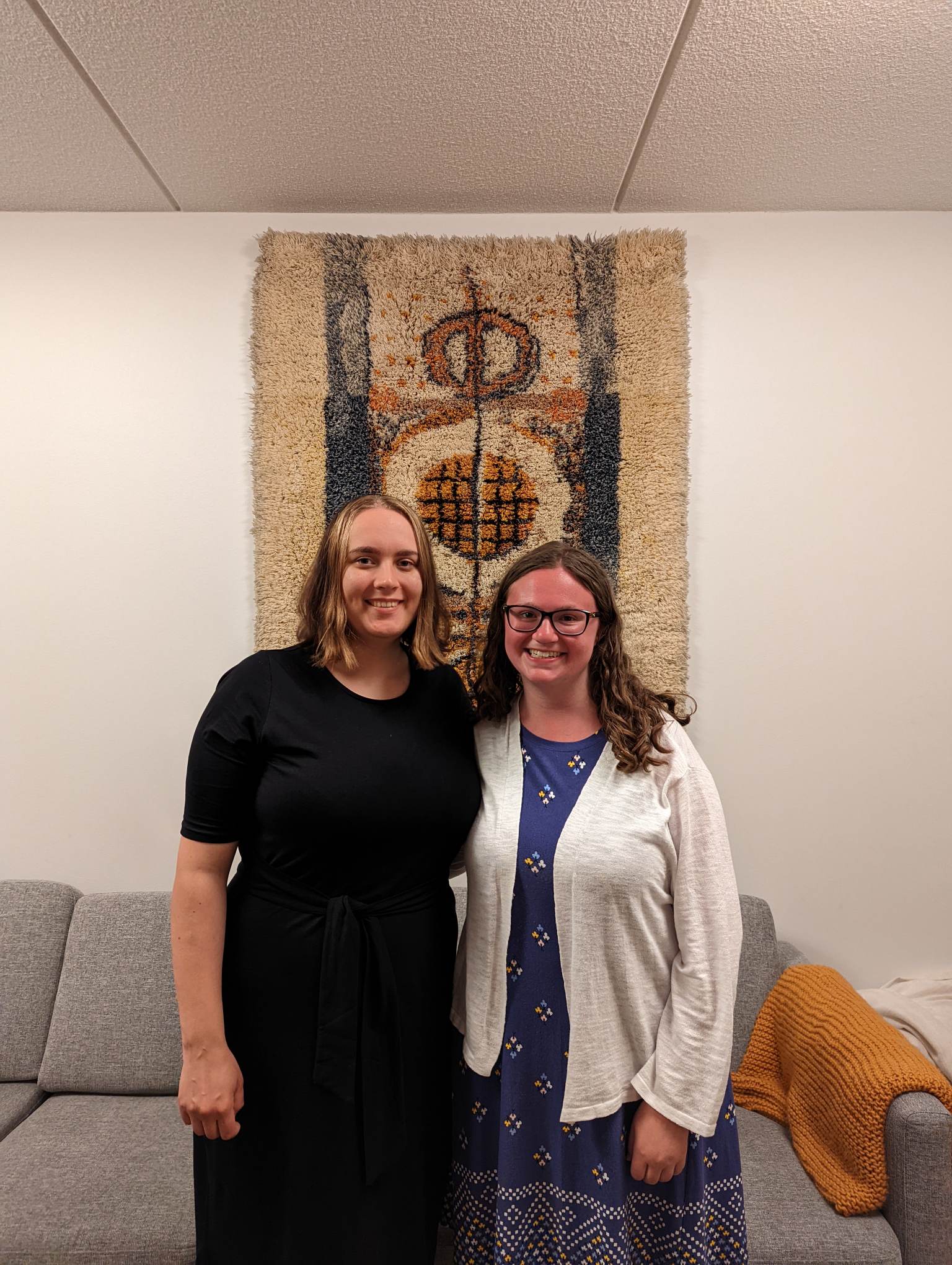 The secretary leads us to the sanctuary, and my first reaction is: “Wow the walls are green.” Chana and I sit down in brown, wooden seats facing the bima, behind a few rows of Israelis visiting on a tour. A man stands at the front of the bima and speaks in Hebrew.

“He used to be our cantor,” Chana whispers to me. “Now he lives in Israel but comes back to Helsinki every summer.”

A second later, realizing that the cantor is speaking only in Hebrew, Chana nudges me on the arm and hands me her phone. She has typed “Do you understand Hebrew?” I nod my head.

The cantor picks up a guitar and starts singing “Shehechiyanu.” I hear Chana quietly join in.

When the cantor and the Israelis leave, I walk around the sanctuary. I pick up a “Sidur Helsinki” and flip through the pages. I am excited to see the Finnish language

Next, we walk to the adjoining Jewish school. To enroll, at least one parent of a child must be a member of the Jewish community. In Helsinki, all Jewish institutions, except for the Chabad house, are based in one large complex: the Jewish school, the Jewish community center, the synagogue, Jewish youth spaces, the mikvah, a Jewish library, the Jewish preschool. The secretary points out the tables where students eat their lunch each day. Chana recalls the excitement she and her classmates had as kids when it was their turn to ring a golden bell before chanting Birkat Hamazon.

Chana seems so comfortable in her Jewish community. I feel pretty comfortable in her community. As we walk back to her apartment from the synagogue, she runs into someone and has a short conversation with him. “Jews,” she says to me smiling, as we walk away. It reminds me of something I would say in the States — all Jews know each other.

And yet, as much as I have enjoyed my time in Helsinki and appreciate the friendly atmosphere that surrounds the happiest place in the world (according to World Happiness Report rankings based largely on life evaluations from the Gallup World Poll), I feel that I wouldn’t love living in a place with so few Jewish institutions. Later, I ask Chana if it is hard to live in a place where there are not many other religious Jews, and she instantly replies “yes.”

“It’s the reason I moved to England for university, so I could be with a larger religious community,” she says. “But I’m not sure yet where I will live in the future.” PJC

Madison Jackson, a graduate student at the Chatham University MFA program in Creative Nonfiction Writing, is the founder and executive director of the Global Jewish Pen Pal Program. She is traveling throughout Europe this summer and writing for the Chronicle about Jewish life in diverse locations. She lives in Squirrel Hill.
Read more about her travels on pittsburghjewishchronicle.org.