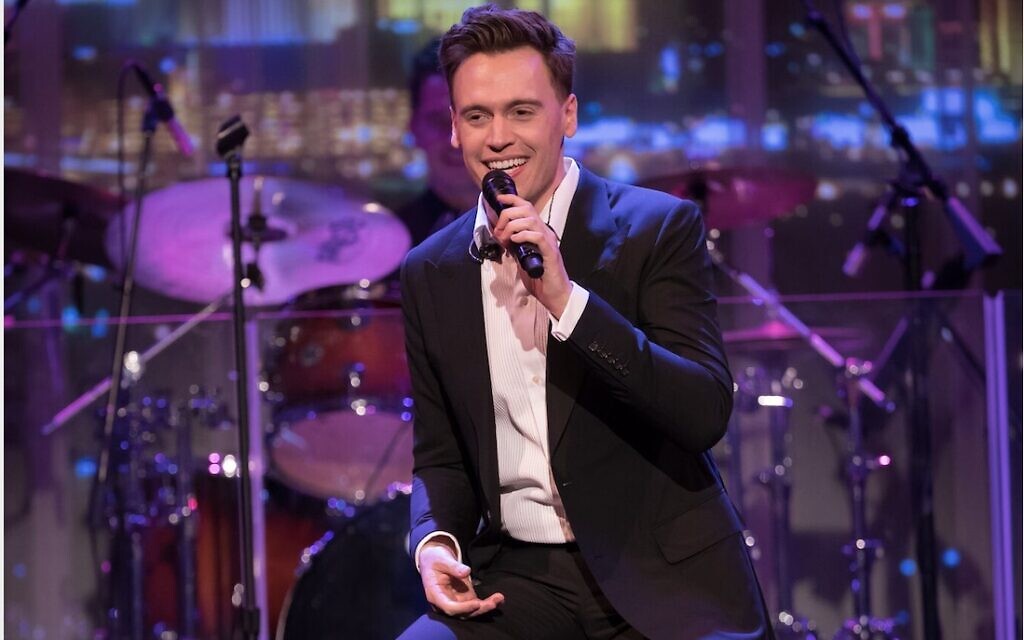 Erich Bergen — aka Bob Gaudio on stage and in the film “Jersey Boys,” and Blake Moran in the CBS drama “Madam Secretary” — said it’s fitting that his first live performance since the start of the pandemic will be in Pittsburgh.

After all, his Pittsburgh roots run deep. His father’s family, the Rosenbergs, all hail from Squirrel Hill, and Bergen, 35, has visited his family here countless times.

“I’m the only one not from Pittsburgh,” said Bergen, who will be the first performer featured in the Pittsburgh Cultural Trust’s Cabaret Series, opening on Oct. 11.

His scheduled performance here in 2020 was canceled due to the pandemic, and he is eager, he said, to take the stage at the Greer Cabaret Theater to sing songs from Gershwin to Frankie Valli, and to share stories from his life on stage and screen.

“This will be my first time performing in front of an audience since, I think, January or February of 2020,” he said. “And it’s perfect that it’s Pittsburgh because of my connection to Pittsburgh. This is a concert that I’ve been excited for for a long time. When it got canceled due to COVID, I was crushed. The fact that it’s happening again, and the fact that it’s not only my personal first show back but also the reopening of the Cabaret Series, it’s all perfect and very exciting.”

When it comes to his Pittsburgh family, Bergen — whose father is Gary Rosenberg — can talk the talk.

“My cousin Evan Rosenberg is the publisher of the Pittsburgh Business Times,” he said. “Everyone went to Allderdice. Everyone’s from Squirrel Hill. They all lived in that house right behind that restaurant, Poli’s. Evan was the head of sports advertising at Three Rivers Stadium, and I’ve sung the national anthem at a Steelers game. So I’ve a big Pittsburgh connection.”

Though he comes to Pittsburgh often — and doesn’t visit the city without stepping into Jerry’s Records on Murray Avenue — Bergen was raised on Manhattan’s West Side. He has a strong cultural identity as a Jew, Bergen said, although his mother is not Jewish and he was not raised in a religiously observant household. His Pittsburgh family is affiliated with Temple Sinai.

“All my friends growing up were Jewish,” Bergen said. “I went to a summer camp that was primarily Jewish kids. So, my reference point is Jewish. You know, my humor, my timing, my cultural references, it’s all from a Jewish background for sure. I just didn’t grow up with any kind of religious structure. But when you grow up on the West Side of Manhattan, as I did, I think it’s in the water.”

When theaters went dark in March 2020, Bergen, like many performers, pivoted. He formed a production company, and, according to Variety, has become “one of Hollywood and New York’s most in-demand producers of virtual events.”

He got his start in virtual producing with the one-night return of “The Rosie O’Donnell Show,” a star-studded live event on Zoom to raise money for the Broadway community via The Actor’s Fund. Another early producing project was an online gala for the Children’s Museum of Pittsburgh in June 2020.

“Cut to ‘Here we are in September of 2021,’” he said. “Now I have a production company that has five employees and we’ve now got over 75 projects since that very first one. And it’s allowed me to work with everyone from President Obama to Cher, all via Zoom.”

While his production company is successful, Bergen still loves performing, and the energy in his voice when describing his upcoming Pittsburgh gig is infectious.

“I’ve been lucky enough to have a career that has been based around music,” he said, noting his association with the sounds of Frankie Valli and the Four Seasons. “I got very, very lucky for even a slight association with those songs, because I love singing them and people love hearing them.

“So when I think of a great concert, I put it this way: I can’t sing like Billy Porter. I can’t sing like a lot of these, you know, big-belters. But what I what I can do is produce a great night of entertainment. And my goal, whenever I do a concert, whether it’s with a three-piece band, just a piano or 70-piece orchestra, is to make sure that the audience feels like they’ve gone to a party. And when they’ve left, they think they may think about some things differently, or they’ve changed in some way.”

Nothing can replace live performances, Bergen said, and he’s thrilled that theaters and cabarets have begun to reopen.

“You know, there’s only so much joy that Netflix can bring,” he said. “And I think that live entertainment is essential to any town, community, city, not just on the Broadway scale. It’s so important, and I’m so happy to help reopen that.

“This is a show that I’m really proud to bring,” he continued. “It’s really fun. I have some really fun stories to share about making ‘Jersey Boys’ and making ‘Madam Secretary,’ and then some wild stories of my experience over the past almost two years being this Zoom mega-producer and working with some of the most famous people in the world — from the waist up.”

In Pittsburgh, he will be singing songs “that people know and love,” he said, accompanied by a band of four musicians. “Music by everyone from George Gershwin to Barry Manilow to, you know, some of the great songs associated with New York City, ‘Jersey Boys,’ of course, and some songs from my solo albums. And, and, you know, maybe if people tip me enough I’ll take some requests.” PJC