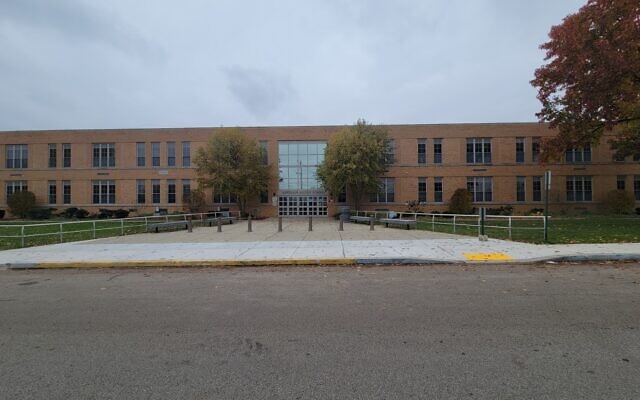 Jefferson Middle School has found three swastikas in its building since the spring. Photo by David Rullo.

Light might make the best antiseptic, but that doesn’t mean it won’t sting. Just ask the Mt. Lebanon School District.

The district didn’t circle the wagons or spend time trying to massage its message. Instead, both Jefferson Middle School Principal Sarah Shaw, Ed.D. and Superintendent Timothy J. Steinhauer, Ed.D., immediately emailed parents. They did this knowing that several members of the local media were part of the community and stories would soon appear in newscasts and newspapers.

Steinhauer said these incidents send shockwaves through the system.

“Sometimes it feels like we’re being singled out,” he said, “but we would rather err on the side of transparency and communications than be accused of trying to cover up something that is really not that significant of a problem for us.”

He said the district’s school board has placed value on diversity, equality and inclusion and communications.

“Making sure that we’re being transparent, open and honest is a value for them and we’ve taken it to heart.”

Shaw said that the school follows the same procedure whenever they find a hate symbol.

“We contact the Mt. Lebanon police department to help start our investigation; we notify the school and district community and notify our staff. We let the community know that we take this behavior seriously and that we don’t want this kind of behavior happening in our buildings or our community.”

Shaw said the school also provides resources for families and links to articles about how to talk to children about antisemitism, bias, prejudice and hate crimes.

“We educate,” Shaw said. “We continue to educate the children about the serious nature of these events and continue to provide ongoing educational opportunities for our children.”

The education Shaw referenced began long before the latest swastika was found in the school. She pointed out that sixth and eighth grade students study World War II and the Holocaust, including hearing from a Holocaust survivor.

The school, Shaw said, is always looking for additional resources and teachers will be taking part in the Anti-Defamation League’s “Shine a Light on Antisemitism Through Education” seminar.

Steinhauer pointed out that in 2018 and 2019, all 10 of the district’s schools were part of the ADL’s “No Place for Hate” training.

Shaw said she didn’t know if there was a correlation between the latest swastika, found near the end of the World War II unit, and the lessons taught at the school. And she acknowledged that students make mistakes, push limits and seek attention and acceptance into groups.

“But we’re teachers. Our job is to teach children how to make good choices and understand why something is wrong,” she said.
In an interview with the Chronicle after the swastika was found, Beth El Congregation of South Hills Rabbi Alex Greenbaum said it was disheartening to hear the symbol was found but that it came from the positive efforts at the school.

“When a child puts a swastika on a desk, where does that come from,” he asked. “Well, they have been studying the Holocaust. So, where does it come from? I think partly it comes from educating the children on what happened.”

Greenbaum, along with Beth El Congregation Rabbi Amy Greenbaum and Temple Emanuel of South Hills Rabbi Aaron Meyer were already scheduled to speak with students as part of the Holocaust unit, as was Lynne Ravas from the Holocaust Center of Pittsburgh Generation Speaker Series before the swastika was found.

Meyer said that education, rather than discipline, is the right place to start the conversation.

“Bringing more education, more pedagogy, instead of handcuffs feels like the right way to approach these issues,” he said. “This is a learning period for kids, certainly not one exclusive to the Mt. Lebanon school district but rather to all local districts. By looking at this comprehensively, educationally, as well as with the possibility of discipline where necessary, creates a much better solution.”

Ravas’ father is a Holocaust survivor. A former teacher, Ravas spoke to Mt. Lebanon students after the swastika was found. She said that she was impressed with how well the district handled the situation and that the students were receptive to her message.

“I was on the stage, and everyone was masked and social distanced but one of the teachers asked afterward if I heard the audible gasps from the audience? I’ve been telling this story for over 40 years, and I’ve shared it with several groups over the last three years here in Pittsburgh. It seemed well received and appropriate for the age group,” she said.

“Mt. Lebanon is one of the districts that will have a LIGHT (Leadership through Innovation in Genocide and Human Rights Teaching) Center. We’re working with the high school. LIGHT creates a space where students can explore their ideas with good advice from a coordinator.”

She said that it’s important to remind students that the Holocaust is still a living memory and hopes that through education, students will feel empowered to reproach their peers when they notice something wrong.

“Our goal really is for the students to understand that it’s painful.”

While the Mt. Lebanon Police Department is called in as soon as a hate symbol is found to help with the investigation, Deputy Chief Jason Haberman, too, believes this should be an opportunity for education.

He said when the police department is called it looks to see if there is any institutional vandalism or damage to physical property and if there are obvious connotations of hate toward someone.

“We look at the total situation. Was this a situation of trying to get attention, was this hate directed at an individual, a hate crime? The bottom line is, when you’re dealing with the age group of kids, at least in the recent incidents, they aren’t much past the age of reason. We recognize where they’re at in growing up and getting older and making mistakes. We address that with a multipronged approach,” he said.

At the end of the day, Shaw said there is a simple motto she lives by: “The more we know, the better we can do.” PJC