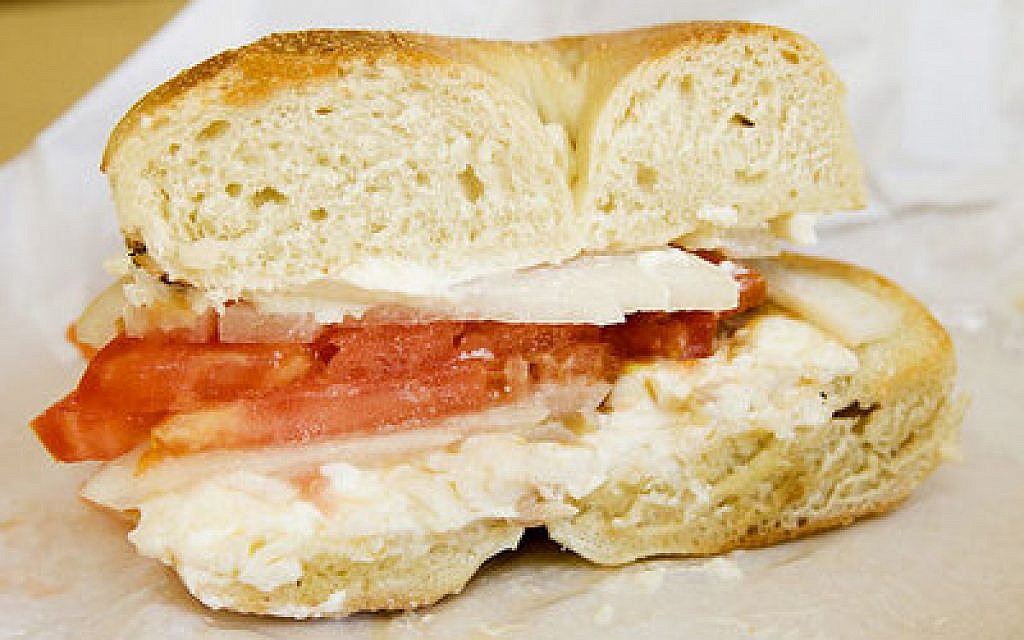 Lox, bagels and cream cheese are standard fare at break fasts. Andrew Silow-Carroll remembers that growing up they represented luxury for his family.

When I was a kid, lox was definitely a luxury. My dad, raised during the heart of the Depression, would watch us on Sunday mornings like an auditor as we placed fingernail-sized bits of lox on a bagel spread thinly with cream cheese. If we put on too much lox, he’d say, “There’s a whole ‘nother meal there!” and force us to put some back.

Once I slept over at a friend’s house, bigger and more luxurious than my own, and watched in amazement and horror as he slapped a slab of lox on an inch-thick shmear of cream cheese. He might as well have taken a $10 bill out of his pocket and burned it.

My wife has similar memories of her parents’ thrift, and neither of us has really shaken off their Depression-era values. (A friend who grew up like I did said it wasn’t until she was dating her husband did she realize it was possible to order a second soda at a restaurant.) Even when we try to indulge ourselves or our kids, our internal accountants are watching carefully. Breaking the Yom Kippur fast last month, I layered on the lox with the care and efficiency of a transplant surgeon.

I’ve always wondered how lox came to be the symbol of Jewish luxury. Just how expensive was a quarter-pound of lox in the early 1970s, when my parents doled it out like gold leaf? I actually looked it up. According to a New York Times article from July 1973, prices ranged from “about $1.15 for a quarter of pound of regular lox (Waldbaum’s, Oceanside, L. I.) to $1.49 at Zabar’s.” This, mind you, was on the eve of an expected lox shortage, the result of “heavy buying by Japanese and Europeans.”

But even taking the shortage into account, $5.96 a pound doesn’t sound like that much to pay for a cured fish. But then I factored in household income. Fifty years ago, the median family income for households with wage-earners in the 45-54 age bracket was $12,900, which rose to $16,730 for college grads (like my dad).

In other words, almost exactly the same.

So if household income doesn’t account for the luxurification of lox, what does?

Data from the U.S. Department of Agriculture might explain it: It turns out our spending on food — proportional to our income — has “actually declined dramatically since 1960,” according to a 2015 article by NPR. The average share of per capita income spent on food fell from 17.5% in 1960 to 9.6% in 2007.

“Because of the overall rise in income, and the consistent shrinking of food prices adjusted for inflation, we actually have more disposable income than our grandparents did, according to Annette Clauson, an agricultural economist with USDA’s Economic Research Service,” reports NPR.

Which suggests that lox may not have taken a bigger bite out of my parents’ income than it does mine, but it took a much larger bite out of their household food budget. If you were worried about the price of meat (like a lot of people in the early ’70s) and just how much three growing boys could eat (which my parents definitely were) you too might go easy on what is essentially a glorified breakfast food.

I also think lox had a cachet beyond its price tag, which taught our parents to treat it as a delicacy. I don’t know when lox first became available in vacuum-sealed packs, but growing up my folks got theirs custom-sliced at an appetizing store or at a supermarket deli counter. (I worked at one such counter in high school, and without any training I was told to slice the lox for a customer. The result looked like an autopsy gone bad.) You weren’t just grabbing some fish, but having it carefully prepared by an artisan to your specifications, usually on the very same morning you intended to serve it. And this you were going to let your husky son just gobble down?

I don’t know that my rich friend’s life would have been better if he ate less lox, but let’s pretend it would have. He never learned that thrift is good for the planet and good for the soul.

In the version of the “Al Het” confession I recited on Yom Kippur, the community owns up to sinning “in our eating and drinking.” The confession doesn’t specify in what ways we sinned at the table, but the verse is immediately followed by the sin of “greed and oppressive interest.” We sin as eaters — and consumers — when we bite off more than we can chew, or let our appetites overwhelm our ability to savor. As food writer M.F.K. Fisher put it — in what, actually, sounds like a confession — “We sink too easily into stupid and overfed sensuality, our bodies thickening even more quickly than our minds.”

Eating, like life, is a balancing act between moderation and indulgence.

My wife is definitely a “less is more” person, and she is usually right: If you end up putting too much lox on a bagel, you find yourself masticating a mouthful of fish, instead of appreciating the subtle interplay among the lox, cream cheese and bagel, with perhaps a caper or slice of red onion for a grace note.

The risk of thrift is when it leads you to calculate the price of everything and appreciate the value of nothing. I admit, I have been guilty of that. But I’d prefer to think of myself as prudent, not cheap. Eating, like life, is a balancing act between moderation and indulgence. I inherited an appreciation for lox, among other finer things in life, and might not have had I been able to eat as much of it as I wanted as a kid.

As for a second soda — what am I, a Rockefeller? PJC

Andrew Silow-Carroll is the editor in chief of The New York Jewish Week, where this first appeared.