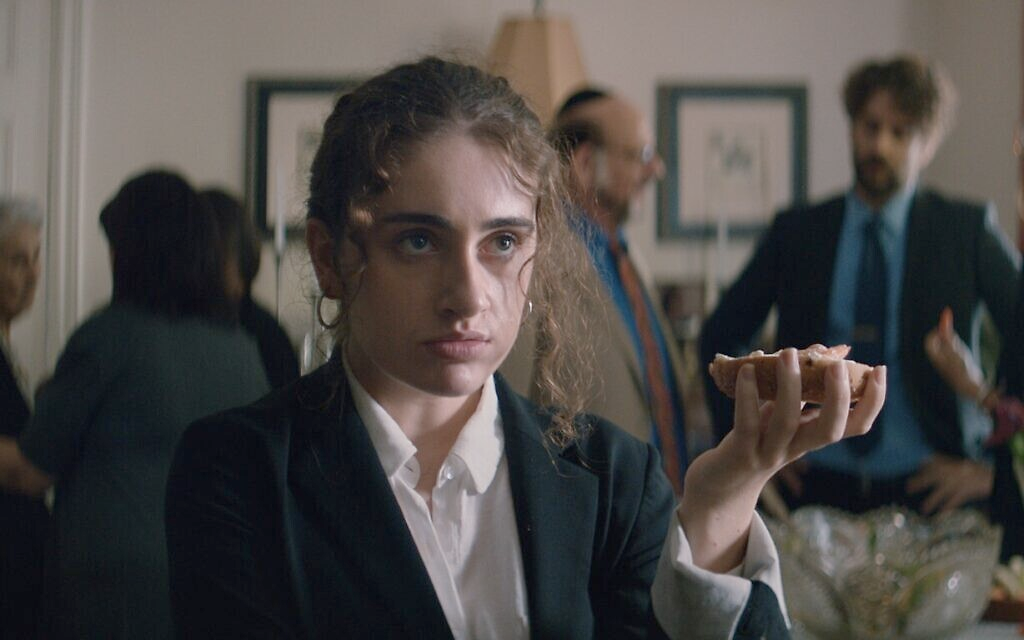 NEW YORK — Much of the tension — and there is a lot of tension — in the outstanding new film “Shiva Baby” derives from the older generation’s heavy expectations of the young, female protagonist. So I’d like to head off any life-reflecting-art at the pass by assuring writer-director Emma Seligman that I don’t really mean it when I say the future of Jewish filmmaking rests on her shoulders.

And yet, this young woman, just 24 during production (the same age as Steven Spielberg on his first feature — no pressure!) can navigate the rest of her career, wherever it may take her, and know that she’s made one of the truly great “Jewish movies.”

“Shiva Baby,” streaming on platforms including Amazon Prime Video and iTunes starting April 2, is a “Jewish movie” both on its surface and in its roots. For starters, almost all of it takes place at a shiva — the quintessentially Jewish weeklong mourning ritual when someone loses a relative — with a spread of lox and bagels laid out before a Greek chorus of kibitzing relatives. One might once in a while hear a bissel (little) Yiddish in a movie, but the mamaloshen spills from the character’s mouths in “Shiva Baby” with an unforced ease that smacks of authenticity. (When there is schmutz on someone’s punim [dirt on their face], why phrase it any other way?)

But it is also a “Jewish movie” in the way most great entries to that canon frequently are — with main character Danielle figuring out how to navigate her own identity without causing a rift with the wider community. When Danielle’s anxiety jailbreaks from inside her head and begins manifesting chaos among the mourners, her mother pulls her aside, cleaning her up with water from the ritual pitcher at the front of the house. “God’ll forgive us; it’s too crazy in there,” she says, and is probably correct, as mothers usually are.

At issue is a series of lies, all pointing to a greater truth. Danielle (brilliantly played by Rachel Sennott) is about to graduate from college and has absolutely no clue what the hell she is going to do with her life. This is very much at odds with how she presents herself, one who proudly forwent pursuing law school to devise her own major in something to do with media and being a feminist (it’s a little vague.) Moreover, this is a young woman of today with agency and ownership of her sexuality, who is engaged in a sugar baby relationship with an older man, with one of the pretenses being that he’s helping her through law school.

It’s not dating, it’s not sex work, it’s something else (and apparently very common these days, thanks to new apps), but it’s still a surprise when that man shows up at the shiva.

And it’s a bigger surprise when she learns he’s got a wife and an infant.

While these revelations shouldn’t bother her, they do, and it also bothers her that her ex-girlfriend Maya (Molly Gordon) is also there, the one who is doing the sensible thing and going to law school. Parents love law school.

Danielle’s mother (a hilarious Polly Draper) is aware of her previous relationship with Maya, but waves her daughter’s bisexual identity away as “just a phase.” It’s unclear what her father, Fred Melamed, knows. About anything.

This all may sound complicated, but Seligman’s script teases this out nicely, tightening this mix of Millennial angst with the cinematic conventions of a horror film. By the end, the orange glow of sunset in the not-quite-suburban home crowded with Corningware-carrying aunts eager to get into the one downstairs bathroom evokes the fiery cinders of a self-induced Hell.

Low-budget first films that clock in at 77 minutes are usually best served as indicators of what a director could do “on a real one.” That’s not the case with “Shiva Baby.” Sennott’s performance as Danielle, balancing between deviance and a clear desire to “do good,” whatever that is, is strikingly empathetic. There are also some rock-solid jokes, and not just ones centered around how to pronounce rugelach or if the kids look too happy in a photo outside a Holocaust museum. I’ll stress again, non-Jews will still “get” this movie; think of movies you’ve seen about customs foreign to you… you eventually figured out what’s what.

As Danielle realizes that she is not as in control of anything in her life as she’s told herself, she experiences a gamut of emotions, climaxing in a literal embrace of the steadying comfort of her Judaism. Her choices of what to do next appear clearer to her, as she prepares to begin her adult life. PJC

This review first appeared on The Times of Israel.