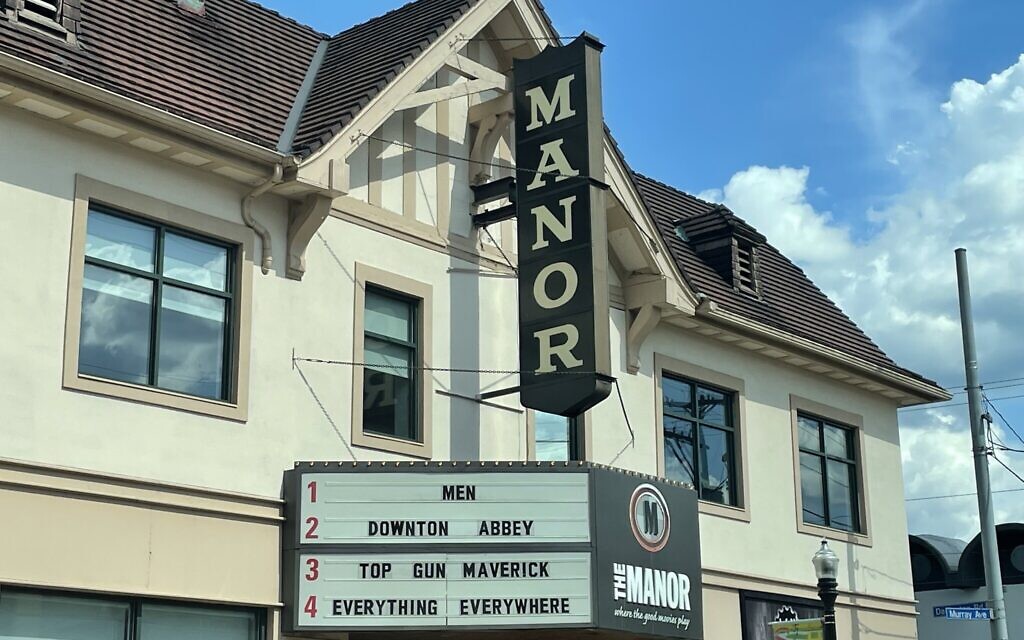 Since its doors opened a century ago in the heart of Squirrel Hill, thousands upon thousands of films have played The Manor Theatre.

The cinema maintains much of its original 1920s grandeur, but a lot has changed over the years: Renovations brought the theater up to four screens, the transition from 35mm film to digital projection took place in the 2010s and a bar was added in 2012.

As movie houses across Pittsburgh have come and gone, The Manor Theatre has stuck around. And while The Manor continues to attract scores of Pittsburgh’s Jewish film fans, many of its regular patrons might not know that the theater’s Jewish history is so storied that it dates to cinema’s silent era.

In celebration of turning 100 this past May, the theater held a film festival of movie classics from “The Godfather” to “Get Out.” The centennial opened with the first film The Manor ever played, entitled “Hail the Women.” And it was around that time that Beth Shalom Congregation started holding events at The Manor.

On the pages of vintage copies of The Jewish Criterion, one of the Chronicle’s predecessor papers, notices can be found alerting Pittsburgh Jews that the Beth Shalom’s Yom Kippur and Rosh Hashanah services would be held at the then-recently opened The Manor Theatre. A later edition of the Criterion includes a notice about a “jubilee gathering” to celebrate the contract for a Beth Shalom community center. That’s an example of how The Manor has served as the backdrop for some of Pittsburgh’s Jewish history –– the building referenced in the article is the same one where Beth Shalom remains housed to this day. 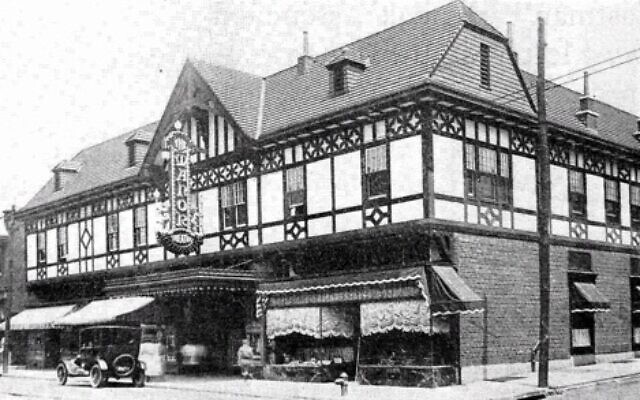 Original building with theatre entrance at front (1922) (Photo via Cinema Treasures)
But The Manor’s connection to the Jewish community isn’t just historical or anecdotal. The past few years have seen films that center around Jewish stories, ranging from “Uncut Gems” to “Dough,” play at the theater. And Pittsburgh’s JFilm Festival took place at The Manor in 2017, as the theater’s doorman Victor Vrabel pointed out.

Vrabel thinks The Manor’s key to success has always been its “loyal patrons and its location in a strong residential section.” He noted that many of those regulars — such as former County Commissioner and Allegheny County Coroner Cyril Wecht and Robert Levin of Levin Furniture — have been highly active in Pittsburgh’s Jewish community.

Plus, the theater’s intermittently been in Jewish hands since the Stern family bought it in the late 1960s. Aside from some ownership changes, it’s stayed with them since the 1990s and is still owned by Rick Stern.

“People in the neighborhood, both Jewish and non-Jewish, have really supported the theater and are very loyal to it when they have other choices of theaters to go to,” Stern said. “We obviously appreciate it. That’s why The Manor’s lasted so long.”

Now that the theater is past its centennial, it’s trucking ahead with a summer of big releases, from “Top Gun: Maverick” to “Jurassic World: Dominion.” But even with a season of huge blockbusters, the theater is still faithful to smaller films.

The upcoming “Cha Cha Real Smooth” — which opened this year’s JFilm Festival — was noted for its distinctive plot, as it follows a bar mitzvah party starter figuring his way through post-college life. Scenes of candle lightings and Kiddush blessings will be familiar to anyone in The Manor’s audience who spent weekends upon weekends going to bar or bat mitzvahs.