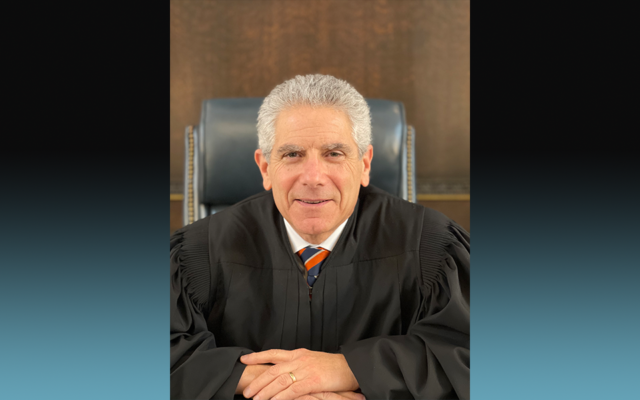 Gary Gilman might be considered the legal Swiss Army knife.

A lawyer, currently serving his 10th year as a Washington County Court of Common Plea judge, Gilman’s professional career has stretched to include civil, criminal and family law.

He’s also served on both sides of the bench, deciding cases in both Allegheny and Washington Counties, and representing litigants for the federal government, as a lawyer with Wilder Mahood and Crenney (now Wilder Mahood McKinley and Oglesby), and at his own practice.

Gilman was born in Brooklyn, New York but grew up in the South Hills, attending Beth El Congregation and graduating from Upper St. Clair High School.

The future judge first arrived in Washington County to attend college in 1980 before spending three years in law school at American University in Washington, D.C.

“I went from little Washington to big Washington, and I came back to little Washington to start my career,” Gilman said.
Gilman clerked for Court of Common Pleas Judge Thomas Terputac when he returned to Pennsylvania before spending time in the solicitor’s office. A role that proved to be more than a passing stage in his career.

“I met my wife Kathy there. She was my boss. She was already a solicitor in that office,” he recalled.

Gilman next represented clients for the Washington County Domestic Relations office in cases both out of the county and out of the state before entering private practice.

In early 2000, after working in private practice for a time, Gilman first got his first taste of deciding cases as a hearing officer and master for the Allegheny County Court of Common Pleas. The role is similar to a judge.

“The role is prominently used in areas of family law,” Gilman explained. “There’s so much litigation, so to lighten the burden on the judges, they are permitted to hire or appoint lawyers to assist them.”

Gilman heard divorce proceedings, often concerned with child support or custody, alimony or the equal distribution of assets, and made a written recommendation, similar to a judge’s opinion.

Given his work history, you might think that Gilman had a passion for family law. He would disagree.

“I had no direction of going there. It just worked out that way. Who knows how things happen like that? You fall into positions due to circumstances and you’re there and then that becomes your career. It worked out well for me. I did enjoy it.”

In fact, it was Gilman’s love of history that first drew him to an interest in law.

“I think the most interesting areas of law have a lot of history and struggle to them, particularly in areas of constitutional law. You get to see how the law evolves, very often through conflict. You see that through our history books. Constitutional law touches everybody. Most cases don’t have a constitutional matter at all. And the idea of the adversarial system — it’s the best out there. That’s how I got into law.”

In 2011, Gilman decided to, once again, follow in the footsteps of his wife, who had served as a judge since the mid-1990s. He ran for and won a vacant seat on the Washington County Court of Common Plea after the death of Judge Mark Mascara.

The judge has spent the last decade hearing criminal cases on the bench, something he didn’t have much experience with before being elected. Beginning in January, Gilman will begin a new opportunity — hearing civil cases.

“It’s kind of nice, as a judge, to get refreshed and do a different type of law. It keeps things lively,” he said.

When he’s not hearing cases from the bench, Gilman serves as the Beth Israel Congregation’s president. He’s held the position for four of the last six years.

“I’m president and before that I was on the board. I’ve been involved with the congregation for a number of years.”
Asked how his Judaism affects his judicial philosophy, Gilman recalled the story of King Solomon and the case of two women, both of whom claimed to be the mother of a baby.

“He presented the question such that, he let the mothers take control. He didn’t make the decision but was able to determine who the true mother was.”

In the end, Gilman said he preferred that, in his courtroom, the law takes center stage, while he serves as a referee.

“It’s like a football game. I have to be in control, but like in a football game, the referee shouldn’t be heavily influencing the game. I give as much due process as any judge can. I really like to be in the background and give lawyers leeway to present their argument.” PJC