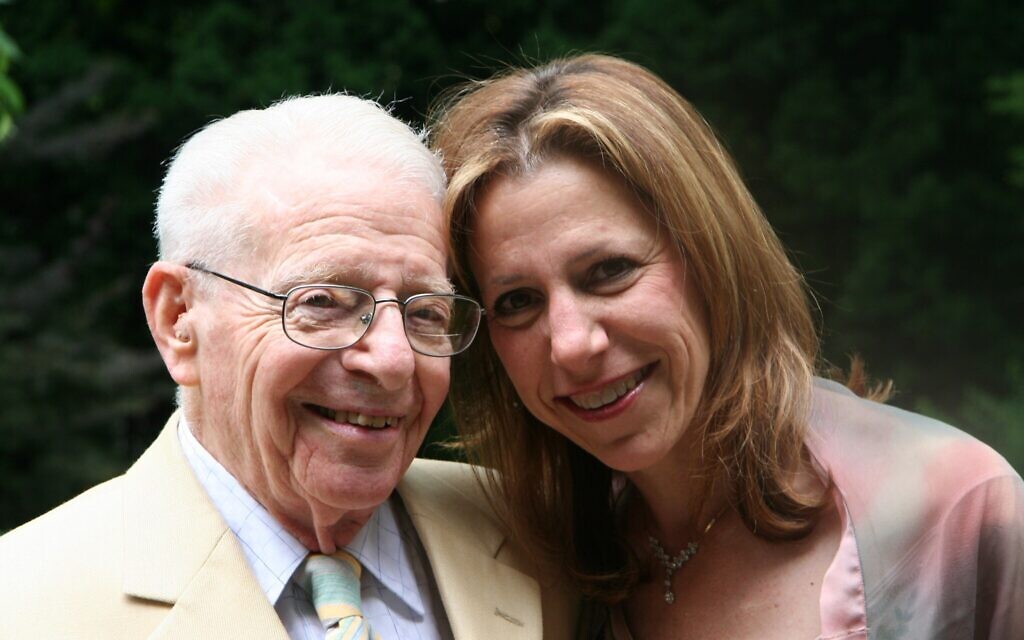 Rudy Baum was 86 when he tried — but failed — to take his life by sealing the garage door of his Dallas home and letting his car idle inside.
His daughter, Karen Baum Gordon, has spent years trying to piece together the details of the 2002 attempted suicide and found arms of the story stretching back to Hitler’s Germany.

Baum was born a German Jew in 1915 and left his native Frankfurt for the United States in 1936, Gordon said. After becoming a U.S. citizen, he joined the Army and, back in Europe, helped liberate the Buchenwald concentration camp near Weimar, Germany. Baum tried to save his parents in the early years of World War II, but the two eventually perished in the Holocaust. Gordon, years later, realized how that weighed on her father.

“He created his own private gas chamber, in a way — what compelled him to do that?” Gordon said in a recent interview with the Chronicle. “I really wanted to understand what that was.”

So, Gordon dove into the family archives. She paid a professional to translate into English 88 letters written mostly by Julie Baum, Gordon’s grandmother, to Rudy Baum between November 1936 and October 1941. In these letters, Gordon discovered what her family experienced in Nazi Germany and the psychological impact echoing through generations.

“You could feel the world crumbling around them,” Gordon said.

After presenting a talk about the journey at her home synagogue in Brooklyn following her father’s March 2009 death, Gordon’s book was born. “The Last Letter: A Father’s Struggle, a Daughter’s Quest, and the Long Shadow of the Holocaust” was published by the University of Tennessee Press in late 2021.

“‘The Last Letter’ is a captivating family memoir that spans events from the 1930s and Hitler’s rise to power, through World War II and the Holocaust, to present-day United States,” book promoters at the University of Tennessee Press wrote. “In recreating the fatal journeys of her grandparents and tracing her father’s efforts to save them an ocean away in America, Gordon discovers the forgotten fragments of her family’s history and a vivid sense of her own Jewish identity. By inviting readers along on this journey, Gordon manages to honor victim and survivor alike and shows subsequent generations — now many years after the tragic events of World War II — what it means to remember.”

“Karen Baum Gordon’s ‘Last Letter’ is a most welcome addition to the literature created by children of survivors of the Holocaust in their attempt to repair the world, as she journeys courageously and intimately into her father’s and grandparents’ horrific histories, commemorating it, and opening a better future for her own children and for all of us,” Yael Danieli, founder and executive director of the International Center for Multigenerational Legacies of Trauma, told the Chronicle.

William H. Weitzer, who heads the Leo Baeck Institute in New York and Berlin, reads many books like Gordon’s and called works like hers part of an “important genre of books” with which the public should engage.

“The last people that actually witnessed things are quickly going away,” Weitzer said. “Now, it’s time for the children and grandchildren to tell these stories [and] come to grips themselves with their own trauma.”

“I’m extremely fascinated about how people choose to tell these stories,” he added. “It’s really interesting how they incorporate [the family and world histories] into their own lives, their own professions.”

The world around the book is small, Gordon said. It turns out Gordon’s parents briefly settled in Mt. Lebanon from 1946 to 1948, where Gordon’s brother was born. The family, however, went on to spend most of its years in the Dallas area.

Another Pittsburgh connection? Gordon’s great-great-great uncle, Abraham Geiger, was one of the founders of Reform Judaism; one of the leaders of Geiger’s seminary in Germany was Rabbi Walter Jacob, rabbi emeritus and senior scholar at Pittsburgh’s Rodef Shalom Congregation.
“I love these small-world stories that I keep finding,” Gordon said. “One of the most phenomenal things about this book is it’s the gift that keeps on giving.”