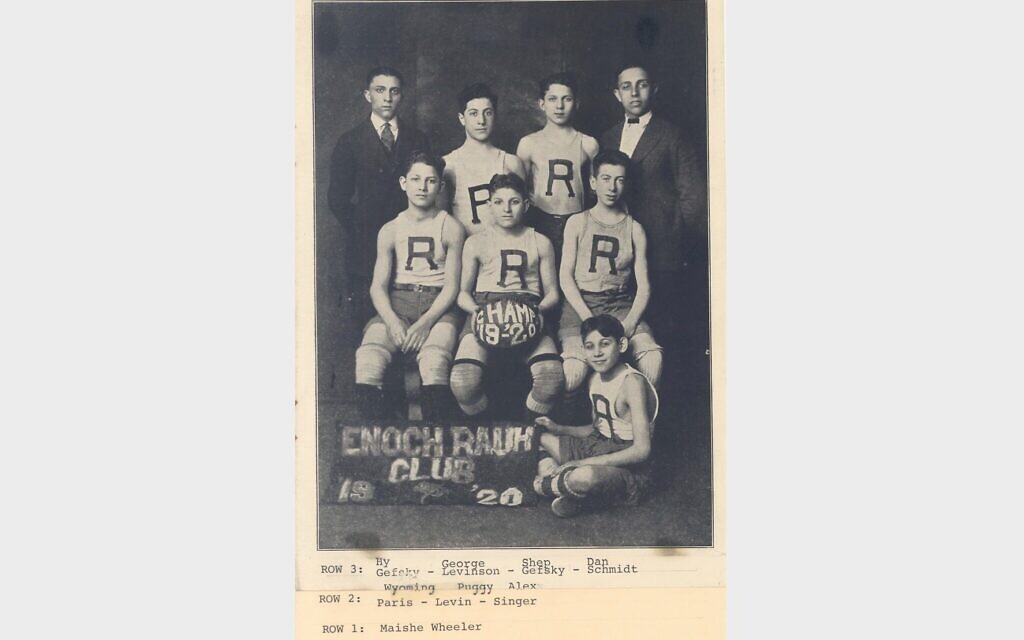 A photograph of the first Enoch Rauh Club basketball team from the 1919-1920 season, including Wyoming Paris, Shep Gefsky, and Dan Schmidt (Photo courtesy of Rauh Jewish Archives at the Heinz History Center)

In a 1998 oral history with the National Council of Jewish Women, the critic Barry Paris told a second-hand story about the founding of the Enoch Rauh Club — how it got its name and how it secured start-up funds for its youth basketball team. He had heard the story from his father, Wyoming Paris, who had been a leader in the club for decades.

“He, as he tells the story, if I have it right, took the streetcar out to Squirrel Hill to where [the Rauhs] lived — I think with a friend, he would tell you the name and the age and size and height — and knocked on the door and asked to see Mrs. Rauh, and she kindly allowed them to come in, and seated them in her beautiful parlor, and they told her the story and made the request, and she came through,” Paris recalled. “She said yes. And so I think that’s how — I know that’s how they got the uniforms and I think that’s how they got the name. They took the name Enoch Rauh Club in honor of their patron.”

A lot of what we know about the past arrives this way, as recollections of recollections. But this time, something unusual happens. The interviewer hands Paris a sheet of paper. It’s the same story, only this version had been written by Wyoming.

“Oh here’s the story!” the younger Paris says. “Let’s see how close I was.”

Paris now reads his father’s version, adding commentary: “‘I was one of four boys from the Hill District who originated the club. I suggested Enoch Rauh for the club name because of his respectful life and being the first Jewish councilman in Pittsburgh, copying the use of well-known names for clubs… Long story about Enoch Rauh Club history and Mrs. Rauh inviting us boys to her home in Squirrel Hill to listen to our idea of a club honoring the well-known, respected Enoch Rauh. Another long story, but a quick answer — Oh, for him, this is succinct — for the most important assumption: Mrs. Rauh gave us a note paying for jerseys and shorts. Nothing else ever. We financed ourselves by getting small fees for playing in many Pittsburgh areas, West Virginia, Ohio, Maryland, and the money from our own individual few dollars we made working various jobs.’”

The account continues, reaching an important conclusion. “Underlined are the original four boys invited to Mrs. Enoch Rauh’s home in Squirrel Hill to discuss using the Rauh name for the club,” Paris reads, and then he tells the interviewer, “And before that, underlined, are Shep Gefsky, Alex Singer, Maishe Wheeler and Wyoming Paris.”

The moment highlights how retelling a story often means refining it. In one version, two brave boys ride to Squirrel Hill to cold call a leading Jewish citizen. In the other, she invites four boys to her home. In one, the boys name their club in honor of their patron. In the other, patronage seems to be given in gratitude for the honorific.

The Enoch Rauh Club was among the best known and longest lasting of the hundreds of Jewish youth clubs founded in Pittsburgh before World War II. By the 1940s, it was running a youth basketball league and a popular charity for local orphans.

Success often prompts a turn toward history, as does longevity, which is a form of success. In recollections from 1932, longtime Enoch Rauh Club advisor L. Daniel Schmidt recalled how he got involved with the group. It was the spring of 1920, and he was a recent high school graduate living in the Hill District. One of the kids on his street, a boy named Shep Gefsky, asked him to become the adult supervisor of a new club.

“I met the boys. They had organized in January of that year. Enoch Rauh of City Council, one of Pittsburgh’s leading citizens at the time, had passed away in November of the previous calendar. With the courage born of immaturity, they had written Mrs. Enoch Rauh requesting permission to name their club after her illustrious husband. Mrs. Rauh had graciously consented and forever after endeared herself to every boy in that club.” No streetcar here, nor a knock on the door. No jerseys, no shorts, no Wy Paris.

You may remember learning in school about “primary sources” and “secondary sources.” The distinction is proximity. A primary source is created by the people involved in an event and is ideally created as close to the time of the event as possible.

We have a primary source for our story. It’s the letter to Bertha Rauh, dated Jan. 25, 1920. Shep Gefsky wrote it in schoolhouse cursive across four sheets of stationery. It begins with an apology. The boys had already been using Enoch Rauh’s name for their club, without asking for permission. They were rectifying the oversight “to play safe.”

Gefsky explains that a dozen Jewish boys had recently formed the club. They had easily agreed on a purpose — literary and athletic pursuits — but they were hotly debating their name. “Benjamin Goodstein suddenly called out the name of your late husband Enoch Rauh and the name was adopted unanimously.” The next two and a half pages list the officers and committee members of the club. The list doesn’t include Wyoming Paris.

The first report of the Enoch Rauh Club appeared in the March 5, 1920, issue of the Jewish Criterion. A membership list published a few weeks later, in the March 26 issue, is the first mention of Wyoming Paris, who became a star of the basketball team.

The point isn’t to debunk anyone’s memories. It takes very little imagination to reintroduce Wyoming Paris into the story. Ambiguous wording, false memories and incomplete documents could reconcile many of the conflicting details in these accounts.

Set all the facts to the side and what remains are the stories — or more to the point, the storytellers. Barry Paris delights in his raconteur father. Wyoming Paris defends the industriousness of his friends. Dan Schmidt summons theatrical adjectives and adverbs to turn the story of some boys asking for permission into a tale of near-mythic adoration. PJC