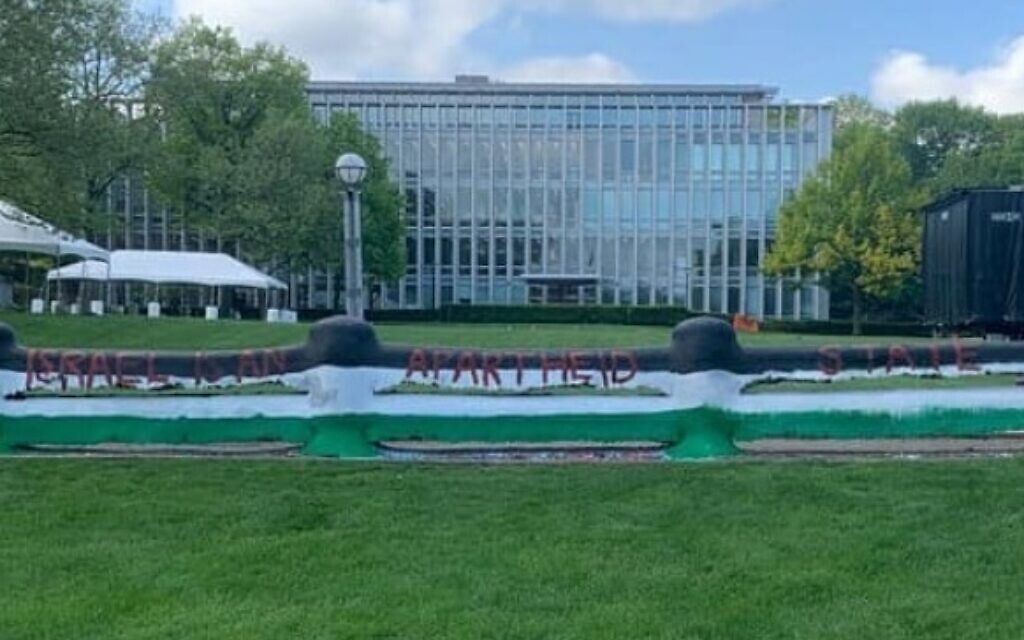 A message on the Fence at CMU on May 10, painted by the Muslim Student Association, read "Israel is an Apartheid State." Dan Diker argues that these actions are part of a 60-yaer-plan by the PLO. (Screenshot from @cmufence)

A new Amnesty International report, called “Israel’s apartheid against Palestinians: a cruel system of domination and crime against humanity,” is the latest in a series of political assaults on Israel by various “human rights” organizations, among them B’Tselem and Human Rights Watch.

The 211-page indictment is a voyage into an alternate reality. It concedes facts and ignores context. Its conclusions appear to have been drawn by its London-based activist-investigators before any research was conducted.

Amnesty’s use of “segregation,” “brutal repression” and “domination” to justify its “apartheid” labeling of Israel is reminiscent of Soviet- and Communist China-led political warfare campaigns of the 1970s. Amnesty’s premeditated use of the term “apartheid” is meant to deny the Jewish people indigeneity in the land of Israel, and recast Jews as the latest version of the Dutch Boers, who colonized and segregated Black-majority southern Africa.

This subversive language, which formed the basis of the former Soviet-sanctioned international anti-Israel disinformation crusade, is employed throughout Amnesty’s report. Politicized pseudo-legal buzzwords, such as “OPT”—“occupied Palestinian territories” — could have been taken out of the Soviet playbook.

Perhaps most significantly, the report reflects the decades-old strategy by Palestinian groups —whether Fatah, Islamic Jihad, Hamas or the Popular Front for the Liberation of Palestine; whether Islamist, nationalist or Marxist-Leninist — which have devoted the past six decades to assaulting and subverting the existence of the only democratic nation state in the Middle East. Their goal has been to replace the sole Jewish state with another Muslim-majority one, in line with Islamic law.

As early as 1961, Ahmad Shukairy, the PLO’s first chairman, a former Saudi ambassador to the United Nations, declared to the U.N. General Assembly that Israel was practicing the “apartheid of South Africa.” He also “Nazified” Israel, by accusing it of embodying Adolph “Eichmann in a state.”

Amnesty’s report parallels Shukairy’s denunciations of Israel, which preceded Israel’s so-called “occupation” of the West Bank by half a dozen years. In both cases, it’s Israel’s reestablishment in 1948, not its surprise victory in the 1967 Six-Day War over Arab marauders and unexpected winning of Jerusalem and historic Judea and Samaria from Jordan, Gaza from Egypt and the Golan Heights from Syria, that’s at the root of the delegitimization and defamation.

In his infamous 1974 U.N. “gun and holster” address, Arafat compared Zionism to apartheid and referred to them as the remaining evils of the 20th century. He and his Soviet sponsors successfully mobilized Third World and non-aligned countries to pass UNGA Resolution 3379, “Zionism is Racism,” demonizing the notion of Jewish self-determination a mere three decades after the Nazi genocide of 6 million Jews.

The Amnesty document’s cancellation of Israel’s legitimacy mirrors the 1975 U.N. resolution, which constituted a key part of the PLO’s Marxist-Leninist “long war” strategy. The Soviet-backed and -directed disinformation campaign sought to isolate and undermine Israel as a “colonialist and imperialist” implant in the Middle East.

Arafat skillfully and deceptively branded Israel as a racist Western power, uprooting its identity as an indigenous Near Eastern civilization, in order to coalesce the Third World and nonaligned countries, and specifically African nations. By that act, he planted the seed of the “racialization” of Israel as a white supremacist entity that has borne fruit in today’s Western discourse.

He successfully fused Israel with apartheid South Africa, around whose condemnation and isolation the international community coalesced. The language, intent and much of the content in the Amnesty report reflect the PLO’s revolutionary strategy, based on its 1968 charter and later on its 1974 “plan of stages.”

Fast forward to 2001. Arafat mainstreamed his strategy at the first U.N.-sanctioned “World Conference against Racism,” hosted in Durban, South Africa. He and his nephew, the Palestinian Authority’s U.N. envoy, Nasser al Qudwa, guided the Durban NGO forum to declare Israel a “racist” and “apartheid” state.

Mahmoud Abbas, Arafat’s deputy and current PLO and P.A. chairman, has continued Arafat’s legacy of labeling Israel an apartheid state, as was evident in his U.N. address in September.

The Amnesty report’s condemnation of Israel’s reestablishment in 1948 as a “system of oppression and domination” and “segregation” of Palestinians is also reminiscent of Abbas’ attempt in 2016 to sue Great Britain for its sponsorship of the 1917 Balfour Declaration and later by the Council of the League of Nations, which reaffirmed the historic connection of the Jewish people in “Palestine” and their right to “reconstitute” their national home there.

Abbas and the Palestinian leadership’s decades-old rejection of Jewish sovereignty fits neatly with the Amnesty report. It further echoes a statement last month by BDS leader Omar Barghouti, who has led the international campaign to eliminate Israel from the region. Barghouti reiterated that “Israel cannot be, as a settler-colonial apartheid state … [it] cannot be a normal part of this region.”

The Amnesty indictment of Israel has unmasked the organization once again as a racist agency that engages in anti-Jewish bigotry in the name of human rights. This time around, its “findings” reflect, both in letter and in spirit, the 60-year-old PLO eliminationist strategy of criminalizing and racializing Israel as a colonialist entity since its reestablishment in 1948.
Amnesty, like the PLO, continues to work toward their shared final solution: the cancellation of the one and only democratic Jewish majority nation-state, and its replacement with a 23rd Muslim-majority Arab state of “Palestine.” PJC

Dan Diker is a senior research fellow at the Jerusalem Center for Public Affairs. He is director of the Project to Counter BDS and Political Warfare. This piece first appeared on JNS.