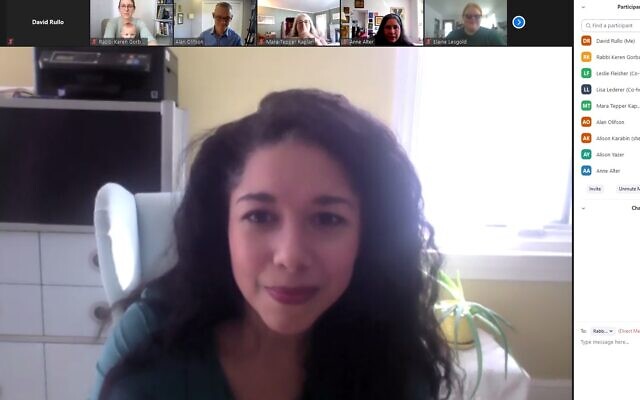 Delilah Picart spoke about her brother, Eric, during Temple Sinai's Moth-like event in recognition of JDAIM. Screenshot by David Rullo.

If the Jews didn’t invent storytelling, they certainly helped perfect it.

From the Talmud to Mel Brooks, the Jewish people have retold their pain, hardships and achievements — often in humorous ways — before groups of people since they’ve been a people.

The stories told during the hour-long program were split between speakers who have disabilities and the friends, family and caregivers of those with disabilities.

The virtual program, attended by more than 80 people, was emceed by Temple Sinai member Alan Olifson, who also emceed the Pittsburgh Moth StorySLAM.

Anne Alter opened the event with a raw and emotional story about living with schizophrenia, describing her schizophrenic episodes as well as the community she’s found at the synagogue.

Delilah Picart spoke about her witty brother, Eric, who was diagnosed with Fragile X Syndrome and displayed symptoms of autism. Picart recounted his love of movies and TV shows, including “M*A*S*H,” “Family Ties,” “How I Met Your Mother” and his favorite, “Star Wars,” and painted a portrait of someone who is more than the disability she called “the kissing cousin of Down syndrome.”

Lynn Rubenson talked about a cross-country trip with her friend, Didi, and Didi’s husband, Gary, a quadriplegic. Rubenson recounted the frustration of the journey, including hotel rooms that claimed to have wheelchair accessible rooms, but didn’t; visits to memorials that were difficult to access; and restaurant mishaps.

“My eyes didn’t just take in the beautiful countryside but the careless disregard of the physically disabled,” Rubenson said. “And don’t even get me started about the stigma of mental illness.”

In perhaps the most emotional story of the event, Rachel Kudrick cautioned against judging a book by its cover. And then, in words that seemed to hang in the air, she stated, “Yeah, I’m fat.”

Kudrick explained that obesity is not her disability. Instead, she told of her battle with binge eating, and how food gave her a sense of security in a sometimes cruel world.

“I don’t recognize or even understand my own hunger cues,” she said.

Joan Stein and Deb Knox spoke together of their friend and Pittsburgh icon Linda Dickerson. The late Dickerson was born with Werdnig-Hoffmann disease, but her life, as Stein and Knox noted, was defined by her work, family and friends.
“Linda was a powerful community leader whose body never worked well,” Stein remembered.

Mara Tepper Kaplan began her story by recounting a time in grade school when a boy claimed she could not read and then insisted she do so out loud.

“My stomach started to hurt because he was right, I couldn’t read out loud,” she said.

Kaplan spoke of finally being diagnosed with a learning disability, and the battles brought on by the disability as an adult.

Samantha Skobel brought a dose of comic relief in her story about working with a student with special needs. It centered around a lunch episode and the difficulties posed when caregivers misinterpret communication. She illustrated the point contrasting the words “chili” and “cold.”

The event’s final speaker, Elaine Lesgold, talked about untreatable brain injuries in the wake of a car accident — and being open to the questions people ask.

“There is a saying in the disability advocacy community: ‘Nothing about us without us,’” Lesgold said. “If I were not open to the questions, I would be closing myself off to the opportunities to educate and to grow. As for the answer to the question, ‘Are you better yet?’ — while I might never be the person I was before the accident, the answer is, absolutely yes.”

The event was organized by the congregation’s Disability Task Force. Co-chair Lisa Guttentag Lederer said all the storytellers spent a lot of time preparing for the event.

“I expected there to be a lot of really impressive, revealing stories,” she said. “It was almost like once people opened their mouths, you could tell they had been waiting to tell someone this. It made me think about the power of storytelling.” PJ