Families and congregants finish mulching trees during the April 11 ceremony in Schenley Park. Photo courtesy of the 10.27 Healing Partnership

A Pittsburgh teenager who wished to remain anonymous organized an event and helped plant 11 trees in Schenley Park on April 11. Two months prior, another unnamed teen did the same in North Park.

The trees were planted in memory of the victims of the Oct. 27, 2018, massacre at the Tree of Life building. Neither teen was directly connected to the victims’ families nor to any of the three congregations attacked, said Maggie Feinstein, director of the 10.27 Healing Partnership, who worked with the teens.

The motivation for the teens was to plant something to hold the memory of what was lost, said Feinstein — reflecting the wisdom of a midrash that says trees have the ability to not only communicate with each other, and with humans, but also to offer companionship.

Alan Mallinger, whose mother Rose Mallinger was killed and whose sister, Andrea Wedner, was seriously injured in the attack, attended both tree planting events.

Mallinger said it was nice to see young people who “didn’t know the victims or anyone involved” yet still wanted to “remember our family members.”

He recalled an earlier ceremony held outside Pittsburgh Allderdice High School where, after weeks of planning, members of the school’s basketball teams and other students planted 11 dawn redwoods on May 7, 2019. 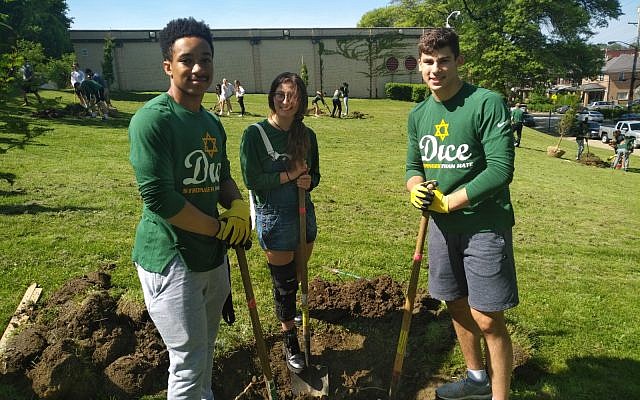 In 2019 Sean Graves, Emily Pressman and Jackson Blaufeld helped plant 11 trees in memory of those who died during the attack at the Tree of Life building. Photo by Adam Reinherz

Each of the three tree planting events was significant and demonstrates young people’s desire to preserve the victims’ memories, Mallinger said.

According to Feinstein, the activities represent a response to horror by bearing witness and showing honor.

“It’s an important sign of resiliency when we show care, when we show that we acknowledge the lives that were taken, and we stand in grief with the people who are most directly impacted,” she said.

In addition to the trees themselves, the quiet sentiments and activities that preceded their plantings also are important to consider, said Feinstein, who worked with the Pittsburgh Parks Conservancy prior to the April 11 ceremony at Schenley Park.

There was one young woman who fundraised to plant 11 trees in memory of the victims, and she found 20 people to contribute and follow her lead, creating a “weight of helpers,” Feinstein said, who are “invested in making change in the future and invested in helping more people.” PJC