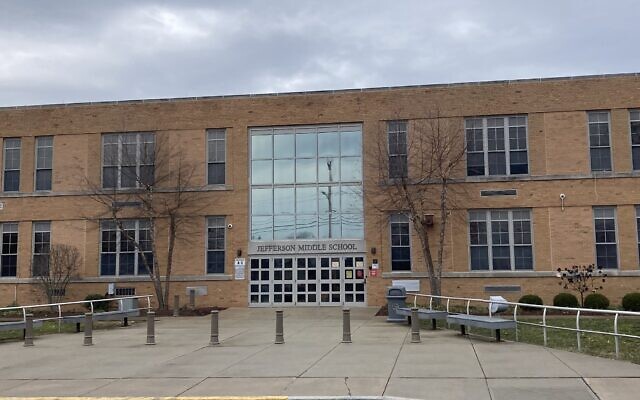 For the fourth time this year, a swastika was found at a school in the Mt. Lebanon School District.

Created out of masking tape and fixed to the back of a dry erase board in an eighth-grade classroom, the swastika was the third one discovered this year at Jefferson Middle School. A fourth incident occurred in May at Lincoln Elementary School.

The masking tape swastika was found on Oct. 27, the same day the Pittsburgh Jewish community commemorated the 11 people murdered at the Tree of Life building in the deadliest antisemitic attack in United States history.

Jefferson Middle School’s principal, Sarah Shaw, wrote in her letter that “there is no place for this type of behavior in our school and community on this day or any day. This incident serves as a reminder that this difficult yet important work needs to continue at JMS and in our community.”

While noting that the school district had “no evidence that the timing, however impactful, was intentional,” she acknowledged that “October 27 is a poignant day for the Pittsburgh Jewish community and human beings of all faiths.”

Shaw’s letter included links to various resources aimed at battling hate, including the Anti-Defamation League’s “Talking to Young Children About Bias and Prejudice.”

Superintendent of Schools Timothy Steinhauer wrote in a letter posted on the district’s website that he had been in touch with area rabbis, and that the district takes “incidents like this very seriously.”

Both the school administration and Mt. Lebanon Police were investigating the matter, Steinhauer wrote, adding that several educational activities had been scheduled at the school.

“There is no tolerance for discriminatory behavior in our schools,” Steinhauer wrote. “We will take appropriate disciplinary action for those found responsible for this incident.”

Laura Cherner, director of the Community Relations Council of the Jewish Federation of Greater Pittsburgh, called the recurrence of antisemitic incidents in Mt. Lebanon “disturbing” but said she appreciated the school district’s response.

“Dr. Shaw has been incredibly cooperative,” Cherner said. “So has Dr. Steinhauer. Administration-wise, it’s really all you can ask for — but it keeps happening.”

Cherner said there are a host of reasons that could cause middle schoolers to display antisemitic behavior.

Even lessons about World War II might be provocative for students seeking attention, Cherner added.

“It’s important to get to the bottom of it,” she said, “and make sure it doesn’t keep happening.”

Rabbi Alex Greenbaum of Beth El Congregation of the South Hills thinks the timing of the swastika could be linked to a recent eighth-grade history unit about World War II.

Two weeks ago, Greenbaum, Rabbi Amy Greenbaum, also of Beth El, and Rabbi Aaron Meyers of Temple Emanuel of South Hills had been invited to speak at Jefferson Middle School — and their talk was scheduled for Friday, Oct. 29, two days after the swastika was found.

When a child creates a swastika at school, Greenbaum said, “it’s important to know where that comes from. In this case, it was because they were studying the Holocaust in that school. I think it partly comes from educating children about what happened. They read Holocaust books and had a Holocaust speaker.”

The rabbis’ talk, Greenbaum said, wasn’t planned because of antisemitic incidents at the school, but rather to teach the students about the consequences of hate — although he noted that the school did ask him to talk about the swastika once it was found.

Mt. Lebanon Police had not returned a call from the Chronicle prior to publication. PJC