When the native Pittsburgher first entered the realm of fiber arts in the 1970s, most Jewish artists who did venture into quilt- or cloth-making were relegated to making simple challah covers or Torah mantles. She was thinking bigger from the get-go.

Quilting, Silk said, is not a particularly Jewish art form. Most Jews emigrating to the U.S. from Europe in the 20th century clung to more traditionally Jewish mediums of craft work, such as needlepoint and crocheting.

“Jews didn’t quilt and quilters weren’t Jewish – I thought they really didn’t relate,” Silk said. “Driving up Forbes Avenue one day, I just got this epiphany, like, ‘What if I quilted Jewish? Maybe it would be something new and different.’”

Silk’s work was both new and different and placed her near the forefront of the craft and fiber arts movement in Greater Pittsburgh, peers said.

Silk’s exhibit is running through July at the Gallery in BNY Mellon Center at 500 Grant Street. The space is located in the lobby of the Steel Plaza T-Station in downtown Pittsburgh.

The exhibition, which features about a dozen of Silk’s works, is open daily through midnight and is free to the public.

Kate Lydon, director of exhibitions for Contemporary Craft, said Silk’s work, some of which resonates with themes of social justice and social equity, is very tuned in to the current cultural moment.

“She has some smaller pieces [in the exhibit] that are really carrying messages for people – and before COVID-19, she’d been there every day from 11 to 2, engaging with folks,” Lydon said. “A lot of the messages she’s bringing forth are really important today – such as healing and kindness, things we should be interested in at this time and at all times.”

Lydon’s entry point into the “ReNew” exhibit is a series of archangels designed by Silk and draped in cloth, particularly one depicting the archangel Michael.

“It’s something that is really present with you,” she said.

Stephanie Sun, marketing manager for Contemporary Craft, called Silk’s work emblematic of someone who was taking fiber arts “past its potential.”

“She places focus on zero waste and … takes it into a more spiritual realm,” Sun said. “She uses it as a healing force.”

Sun’s favorite piece in the new exhibit is, without a doubt, she said, “The No-Hate Flag.” Modeled on the American flag, the piece is stitched together in kaleidoscopic colors from re-used denim and features one Star of David for each of the 11 individuals killed during the Squirrel Hill synagogue shooting in 2018.

“When the Tree of Life massacre happened, I felt I wanted to do something in my style – so I made that flag in colored denim,” Silk said. “I started thinking about all the factions where all the prejudice is, not just Jews or gay people. I made it for everybody.”

Tree of Life was far from the first time Silk’s work intersected with the roles – or physical spaces – of Jewish organizations. She has exhibited at the Jewish Community Center of Greater Pittsburgh and, after a customized chuppah caught the eye of one rabbi at a JCC event around 1994, she even landed some pieces at Yeshiva Schools in Squirrel Hill. Those pieces are based on the Books of Moses and feature Biblical references as well as Hebrew text. 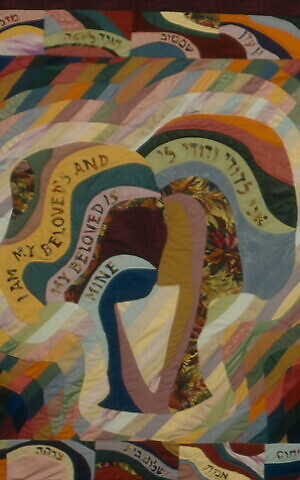 “She puts her whole heart into it,” said Rabbi Yisroel Rosenfeld, when asked about the half-dozen pieces that hang in Yeshiva Schools. “And how beautiful it is. It’s the combination of physical beauty and the spiritual message she has, bringing the two together. She has a knack for that.”

Silk’s spiritual messages are far from staid. She said some of her work has been informed by mystical interpretations of the Bible and other texts.

“I went on to study Kabbalah to find an expression of Judaism that really works for me,” Silk said.

She is also the first to admit the strong undercurrent of faith and religious expression in her work.

“Yes, the angels [in the exhibit] are very evocative of spirituality and spiritual healing,” she said. “To me, though, the exhibit ‘ReNew’ is more and more about how we need some real renewal here.”

For more information on the exhibit, go to https://contemporarycraft.org/exhibition/renew-louise-silk/. PJC