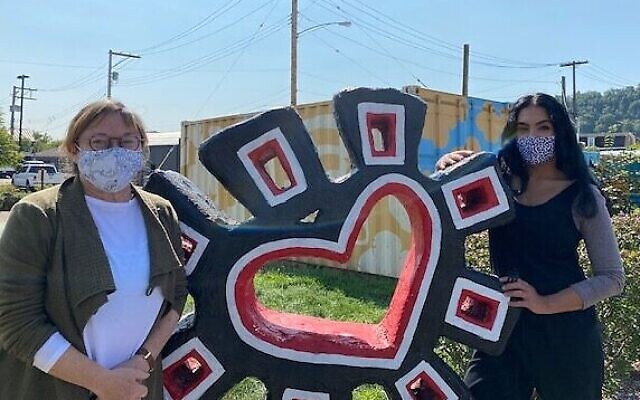 When Gisele Barreto Fetterman came with her single mom from Rio to New York at age 7, undocumented, she was a dumpster diver. She knew injustice — like when her mother was sexually assaulted at work — but felt she couldn’t do anything about it.

“We had to be invisible because any misstep, any attention drawn would’ve changed our lives again,” said Fetterman, 38. “We would’ve been forced to return to a country that by this time we no longer knew as our own.”

Now, Fetterman, the wife of Lt. Gov. John Fetterman — the former mayor of Braddock — works to help others through her organization For Good PGH, using her own experiences as inspiration. 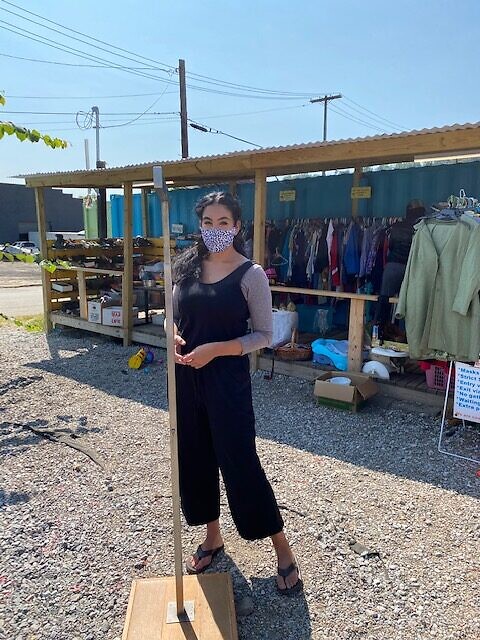 She founded Free Store 15104 in Braddock, now part of For Good PGH, in 2012 to offer a space where people could get necessities without dumpster diving.

Another For Good PGH initiative, Foster Good, provided foster children with suitcases customized by artists so they could have something special of their own. And The Hollander Project — a business incubator and working space for 12 women — helps female entrepreneurs succeed.

So when it came time for Marian Allen and Valerie Bacharach, the co-chairs of Rodef Shalom Congregation’s Pursuer of Peace steering committee, to choose who would receive the biennial award, Fetterman stood out as the perfect pick.

“She really exemplifies in Judaism the highest level of giving, which is to help someone become independent and be able to take care of themselves,” said Bacharach.

The recipient is usually honored at a dinner with around 300 attendees. The event’s $250 price tag supports Rodef Shalom and an organization of the recipient’s choosing. 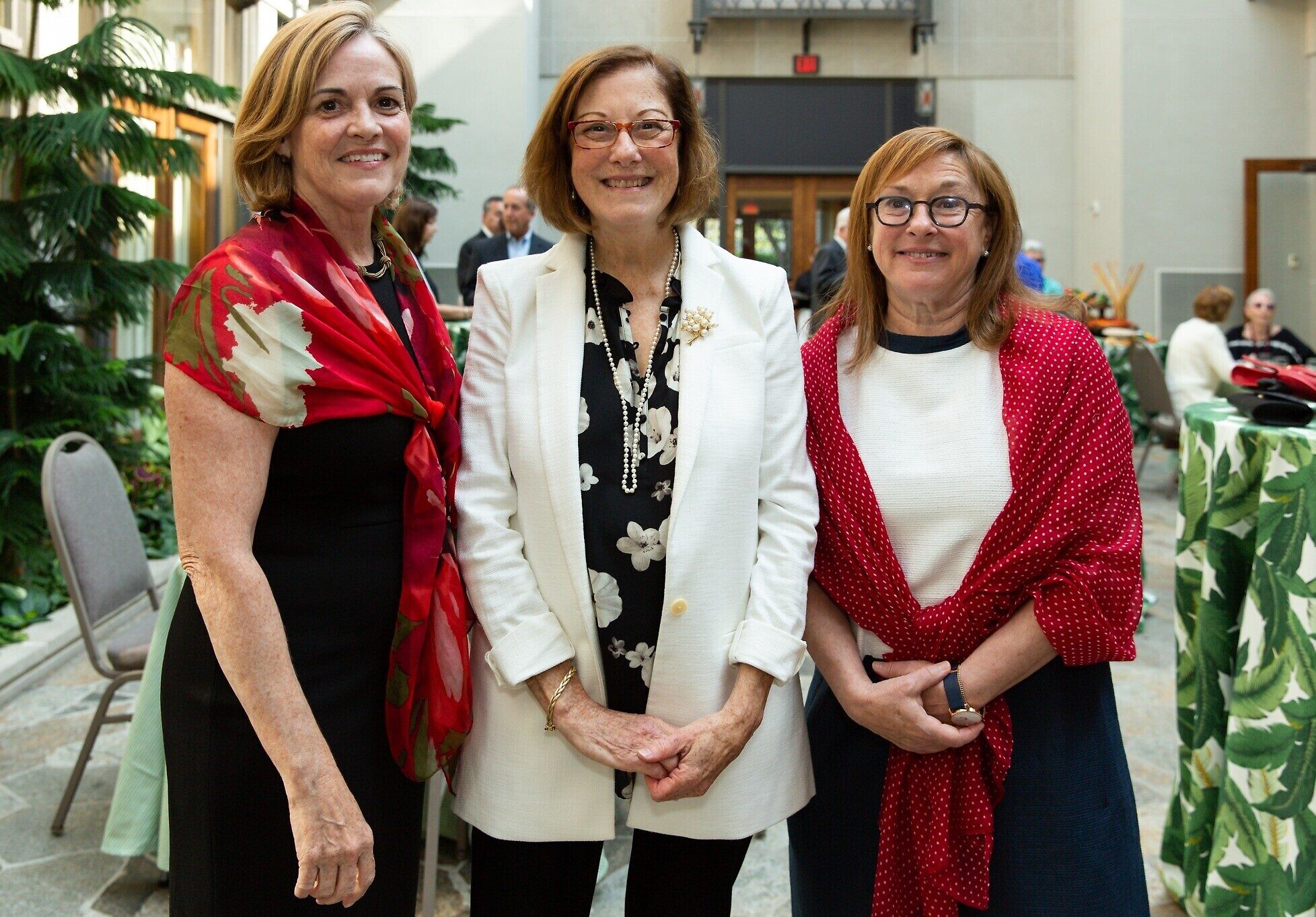 The co-chairs of the Pursuer of Peace Steering Committee at the June 2018 dinner. (From left) Phyllis Wechsler, Valerie Bacharach and Marian Allen. (Photo by Savannah Butler)

This year, pre-pandemic, the Pursuer of Peace steering committee planned to reduce the cost of the event. It felt almost tone deaf to have the typical fancy dinner, explained Allen, knowing many of the people Fetterman helps couldn’t afford to attend.

When the pandemic hit, the committee rescheduled the dinner from June to October. But by mid-summer, a big fall event appeared unlikely. Rodef Shalom canceled it.

“The point of all of this is to follow the idea of tikkun olam, to repair the world,” said Bacharach. “That doesn’t necessarily mean always having a fancy dinner.”

Although the dinner is canceled, efforts to help Fetterman’s cause are underway.

Rodef Shalom is launching its Share the Warmth initiative to support Free Store 15104’s winter clothing drive. And it is planning a gentle pitch to congregants and sharing with them the four areas the funds will be put toward: immediate needs (met by Free Store 15104), mental health services, women’s professional development (through The Hollander Project) and gun safety. 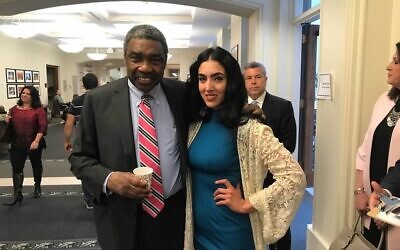 The steering committee is mindful that there are many important and deserving causes and that congregants might be struggling financially due to the pandemic, organizers said. But it still wants to support For Good PGH through its current appeal and pre-pandemic donations.

“Especially in these very fraught times, when so many people are emotionally and physically isolated, to be able to try and help them is absolutely crucial,” said Bacharach.

And the benefit is mutual.

“She’s teaching us what the needs are and how to help,” said Allen. “We’ve already grown in virtue of our relationship with her.”

Fetterman herself still faces prejudice. On Sunday, Oct. 11, as she headed out of a local Aldi with kiwis, she was targeted by a woman who called her the n-word, audible in a video clip from the encounter that Fetterman posted to Twitter. She has dealt with online hatred, she said, but never before experienced something like this in person.

*TRIGGER WARNING* I love love love this country but we are so deeply divided. I ran to the local grocery store and was met by and verbally assaulted by this woman who repeatedly told me I do not belong here. The confrontation continued into the parking lot where I was able to pic.twitter.com/kzSoxCVJ2x

“I was just kind of frozen,” Fetterman told the Chronicle. “I think I just started to cry and just kind of shut down a bit.”

But as shaken as she was, Fetterman asked people to consider the woman who taunted her with compassion.

“I don’t know her story,” she said. “I don’t know how she got to this place of so much hatred and anger. But I hope that there’s somebody in her life who can help her find her way out of it.”

To Rodef Shalom’s Rabbi Aaron Bisno, Fetterman’s response reflects her character. “Gisele Fetterman is one of the persons the rabbis surely had in mind when they taught the lamed vavnik tradition,” he said, referencing the idea that there are 36 righteous people (the numerical value of the Hebrew letters lamed and vav is 36) in each generation.

“Her heart is expansive, and her willingness to allow for the humanity and the challenges that define our lives is immense,” he continued. “True to form, when confronted with an obstacle, a challenge, an assault on human dignity, Gisele responds as we know she would — with a commitment to the understanding that we’re all engaged in a great struggle. We should make allowances for each other, even as we create expectations for us all to live up to.”

Fetterman continues to offer others support through For Good PGH and is grateful Rodef Shalom is joining her in the effort.

“It’s one thing to have this idea that you think is great,” she said. “But it’s everything to know that people believe in that, too.” PJC

Kayla Steinberg can be reached at ksteinberg@pittsburghjewishchronicle.org