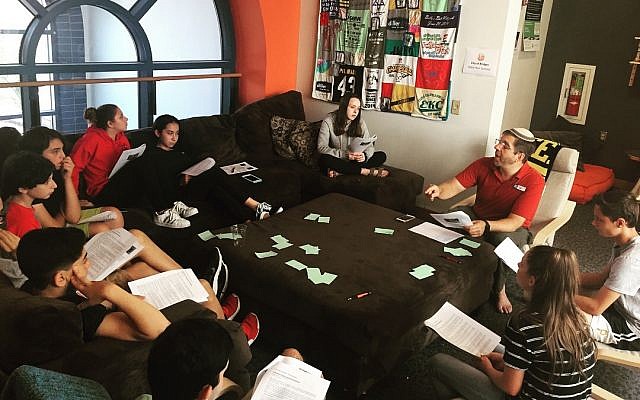 In Pittsburgh, there are no longer weekly after-school classes for post-b’nai mitzvah students, taught by experts in Hebrew, religion or Israel. Instead, leaders at the Jewish Community Center of Greater Pittsburgh are working to understand where teens are now and how to meet their current needs, said Chris Herman, the JCC’s division director of Jewish life.

Since 2015, the JCC’s J Line program offered teen experiences on Wednesdays and Sundays. It was created after the Agency for Jewish Learning shuttered its doors earlier that year. The AJL’s teen supplemental education, J Site, was replaced with J Line; J-Serve, HaZamir Pittsburgh and Hebrew learning programs were also taken over by the JCC.

“As we’re emerging post-pandemic, our approach to J Line has been to create shorter experiences of four to six weeks that are independent of one another and that are different days and times of the week,” Herman said. “They may explore a specific topic through a Jewish lens or informed by Jewish learning that’s specific to just that area, and then they can dive in and have deep, meaningful conversations.”

Herman said JCC leaders have spent the last several years looking at national and local data about teen education and concluded a new approach was needed.

“There’s a recommendation that if you’re doing the same thing you were five years ago, you’re probably doing it wrong,” he said.

It became apparent, Herman said, that teens were no longer available or interested in attending regular Sunday morning Jewish classes.

Unable to meet in person during the pandemic, Herman worked with JCC leadership to reimagine how J Line could look and operate.

The brand will still exist, Herman said, and will still include Jewish subjects, but will also include programs like a college prep series developed by Brenna Rosen, the JCC’s director of Jewish teen life.

“We’re going to explore, not only the secular aspects of preparing for the next step of your life, but also look at things like, ‘Here is Hillel, here are Jewish gap year experiences, trade schools.’ We’re doing that through a Jewish lens,” Herman said.

The various programs will still be primarily in-person group experiences, but some, like a national Talmud-based class by the Teen Beit Midrash of Hebrew College, will be offered virtually.

The changes come at a time when the Jewish teen education experience is being examined and rethought both locally and nationally.

In March 2019, the Jewish Education Project released its report “Gen Z Now: Understanding and Connecting with Jewish Teens Now.” It worked with 14 youth organizations, studying nearly 18,000 teens, conducting what the organization believes is the largest study of American Jewish teens in history.

JEP Chief Program Officer Susan Wachsstock said teens in the study didn’t identify the type of education they preferred; instead, they articulated where they found opportunities for growth.

Wachsstock said the decline of the formal Hebrew high school has been taking place for decades.

“Our constructs are shifting,” she said, “and the global nature of the world today means that teens are connecting online to different experiences, communities and online learning.”

Still, she said, community experiences such as camp are important in helping teens build a sense of self.

Locally, the Jewish Federation of Greater Pittsburgh is working to help teen-focused organizations understand and plan for teen engagement.

Rabbi Amy Bardack, Federation’s director of Jewish Life and Learning, said the organization has created a task force and hired Rosov Consulting to look at the future of Jewish teen learning and engagement in Pittsburgh.

“The goal is to design a model for programs and funding that would begin next year under the guidance of consultants and using data through the research we’re starting,” she said.

As part of the research, the task force will meet with adult professionals who work within youth-serving organizations in one-on-one interviews 15 separate times. Five different focus groups, consisting of five to seven Jewish teens, will also be formed.

The research will take place in December, January and February, and will include the entirety of the geographical region and the span of Jewish affiliation.

Future funding and programming will be decided on the new research.

Bardack said when the AJL closed, Federation provided approximately 55% of the former agency’s funding to the JCC for teen education.

Bardack stressed that while Federation is the convener of the conversations, the JCC will continue to be a partner.

“[The JCC is] one of our largest agencies,” she said. “They have reach in the suburbs and city. They run our big overnight camp. There’s no way they’re not going to be implementing teen learning and engagement.”

Bardack pointed to programs like the Diller Teen Fellows Fellowship — which Federation helps implement but is coordinated by the JCC — as an example of the partnership between the two agencies.

Echoing Herman, Bardack said it made sense to reexamine the Jewish teen landscape every half-decade.

“You should always be rethinking things every five years,” she said. “If you’re not, you’re not keeping up with trends and best practices.” PJC