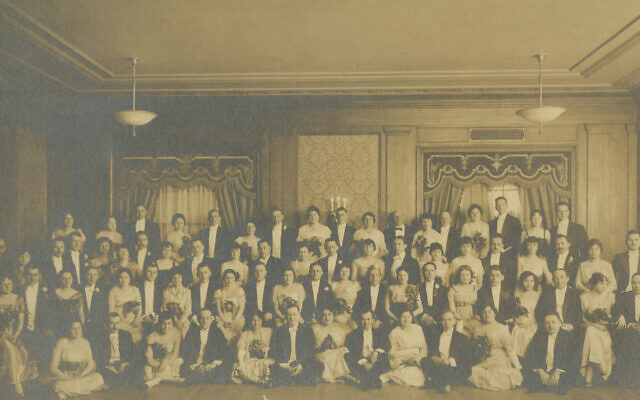 The Duodecim Club at the William Penn Hotel in 1916. Photo provided by the Rauh Jewish History Program & Archives.

Were your great-grandparents founding members of the Concordia Club? Did your grandfather play basketball or swim as a member of the Sable Club? Maybe your aunt attended dances held by the Minyun or Duodecim club.

Pittsburgh was home to hundreds of Jewish clubs, primarily between the First and Second World Wars, Lidji said. Because of their popularity, and the fact that the history of these clubs is largely unknown by the general population, the Rauh Jewish Archives will be highlighting stories of Jewish club life in Western Pennsylvania throughout 2021.

“The thing that’s interesting about the Pittsburgh Jewish community is that the institutions of Jewish Pittsburgh were promoting club life heavily — the Hebrew Institute, the Emma Kaufmann Settlement House and the YM&WHA all acted as sponsoring agencies for the clubs,” Lidji said.

The Jewish Criterion, a predecessor to the Pittsburgh Jewish Chronicle, allotted many inches to covering the clubs, with club leaders submitting paragraphs informing readers of their weekly activities.

The clubs fell into three broad areas of interest for Jewish life in the early 20th century: social, athletics and family. The latter were unique to American Jews of Ashkenazi descent, Lidji said, and were essentially family reunions funneled into the structure of traditional clubs, with regular meetings, dues and bylaws. They even kept minutes of their activities.

“They have picnics, they have events where kids could run around and where adults could sit and chat,” Lidji said. “It was just presented in a way that’s really unique.”

Lidji’s interest in these family clubs sparked the idea of the Rauh delving deeper into their history. Incoming board chair Seth Glick suggested expanding the idea to include a broader range of clubs to make the project more inclusive.

So, what defines a club? Lidji has a few ideas and shared them in a recent Rauh Jewish Archives newsletter.

A club, he said, has a name that represents its members’ shared identity — although it might be hard to discern what identity the Boy Rangers, Go-Getters or Hyfohist Club shared by their names alone. Often the meaning of the names has been lost to history, especially those with forgotten acronyms, like CCG. Clubs named after the local public figures that sponsored them are easier to figure out.

“There was the Louis Little Club, the Ralph Schugar Club. These were all Jewish success stories that the kids kind of looked up to and were hoping for someone to help buy their uniforms and give a little money so that they could host events and things like that,” Lidji explained.

Another defining aspect of a club was that it had officers who ran elections, collected dues, scheduled meetings, drafted bylaws and more.

Every good club also required a clubhouse, or at least a meeting place. Youth clubs, often centered around sports, met at locations like the Emma Kaufmann Settlement house or members’ homes. Adult clubs met at spaces like the Concordia Club or Westmoreland Country Club.

The creation of these clubs often were a reaction to Jews’ exclusion from places like the Duquesne Club and the Pittsburgh Club. In fact, some youth clubs of the era named themselves the “Dukane Club,” Lidji said. “It’s hard to tell if they’re doing it as a joke or not.”

A club was more than a group of people getting together on a regular basis, Lidji said. It had a purpose. The Classical Cleff Club, for instance, was created in 1923 by a group of Jewish women who wanted to learn more about the great composers.

Most of the clubs were local, although occasionally there was interaction across communities, especially with athletics, where the line between amateur, semiprofessional and professional was often blurred. One of the most successful Pittsburgh athletic clubs was The Coffey Club — organized around the game of basketball — whose reputation extended beyond the Steel City, said Lidji.

Membership in clubs provided a sense of belonging at a time when Jews were facing strong cultural discrimination. Ironically, Lidji said, he has heard stories about people being kept out of the Jewish clubs for not meeting certain requirements.

“That’s an interesting part of the story, too,” he said.

The Rauh will be highlighting various Pittsburgh Jewish clubs in its weekly newsletter, telling the tale of this largely forgotten part of Jewish Pittsburgh history. So, if your great-grandmother was the recording secretary for the Ad-A Girl club, or your grandfather belonged to the Char-Ming Club, the Rauh wants to hear from you. You can share your family’s club stories at rjarchives@heinzhistorycenter.org. PJC