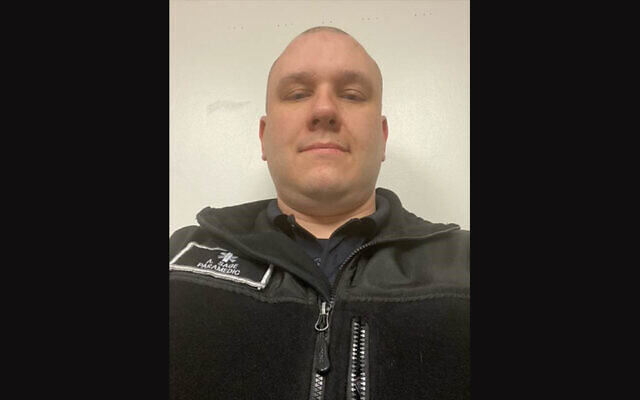 Anthony Sage has claimed the Jewish community as his own, even though he never had a bar mitzvah, never converted, and never blessed wine or read from the Torah.

Instead, Sage stands guard each Saturday morning outside Congregation Poale Zedeck in Squirrel Hill as its members celebrate Shabbat. He has found his place keeping watch, serving each week as the congregation’s security guard.

“People know when they come to PZ, they see me standing out front, it gives them peace of mind,” Sage said. “They can go inside; they can have their services. It gives them that three hours. That’s what makes it rewarding.”

For Sage, public safety is more than a weekend gig. He is also a trained paramedic, works as a fireman and takes calls for the 911 service in Mercer County.

The first responder knew he wanted to help people before he was old enough to vote. At 16, Sage was volunteering as a fireman in Monroeville but felt stymied by his inability to contribute as much as he desired because he was not yet an adult. He became an emergency medical technician after learning that, even as a high school student, that certification would provide opportunities for a larger role.

In 2016, Sage began his relationship with the Jewish community, working as a school resource safety officer at Hillel Academy of Pittsburgh. The Murrysville resident worked at the school for two years. He left Hillel after he received his paramedic certification, although he occasionally covered a shift there when needed.

“And then Tree of Life happened,” Sage remembered.

Hillel principal Rabbi Sam Weinberg reached out to Sage after the Oct. 27, 2018, massacre, asking if he was interested in working as a security guard at Poale Zedeck, the Orthodox synagogue where he was a member.

“I said yes because I knew about 90% of the members because a lot of them go to Hillel,” Sage said. “I knew the kids. I knew everybody, so I felt the need to do it.”

Sage has provided security at PZ ever since then, except for those months when the synagogue was closed due to COVID-19.
“That was horrible because Saturday is like my social hour,” Sage said. “I get to see everybody and keep up with everything in town. That’s the real reason I do it, because I get to see everyone.”

In fact, Sage said he fell in the love with the community while working at Hillel.

“I was embraced with open arms,” he said. “It was a somber day when I left.”

Sage feels connected to the school, he said, and is proud that he left a mark where he could — like teaching CPR to the day care instructors, for instance.

Sage’s feelings toward the community he helps secure are obvious even in the pronouns he chooses when speaking about Jewish Pittsburgh — peppering his phrasing with “our” rather than “their.”

“The running joke is that I could probably be Jewish by now,” he said. “I’ve been assimilated into the culture. There are people who will say to me, ‘Hey, what holiday is this we’re celebrating?’ It’s pretty funny.”

Sage built relationships with both the staff and parents at Hillel, Weinberg recalled.

“Anthony was a wonderful security guard,” he said. “He cared deeply about the kids and went beyond the call of duty to make sure everyone was safe. He was mindful of his job, always trying to find ways to improve and innovate.”

Sage still works at the school from time to time conducting Stop the Bleed and CPR training, Weinberg said.

“He became very much a part of the culture,” Weinberg said. “He was more than a security guard, which was very comforting for the kids, especially after Tree of Life.”

Sage has both a passion and dedication to protect the Jewish community, said Shawn Brokos, the director of community security for the Jewish Federation of Greater Pittsburgh.

“As an EMS worker, he is especially busy — especially these days — and yet he carves out time every Saturday to help keep the members of Poale Zedeck secure,” she said. “The members I have spoken to all speak so highly of him and he has become entrenched in their lives. He is absolutely vested in his role as security at PZ and has built wonderful relationships with many of its members. “

Sage exemplifies the best of humanity, Brokos said: our capacity to care for and protect one another despite differences in religion, race or politics.

“It is a reminder that security is a collective effort, a commitment to compassion by all of us as good citizens to watch over one another despite any differences we may have,” she said.

“You don’t get this anywhere else,” Sage reflected. “Which is why it’s so awesome to have the chance to be at PZ.” PJC