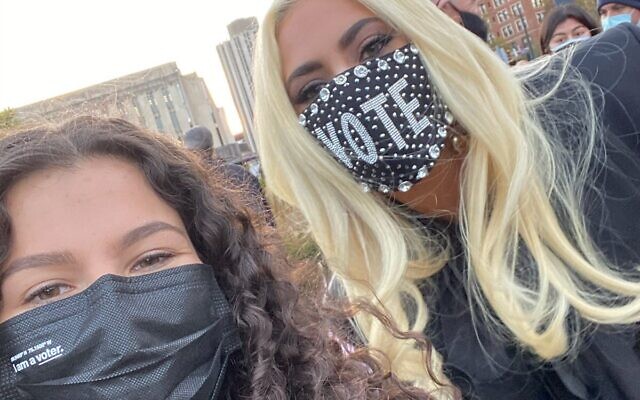 Sophia Shapiro wants you to vote — in a suit or prom dress. The University of Pittsburgh freshman, 19, teamed up with four other youth activists from across the country who were brought together by actress and activist Alyssa Milano to get out the vote. The group brainstormed in early September and landed on an idea: Prom at the Polls.

“One of the things that a lot of young people lost was their prom,” said Shapiro, who missed her own high school prom due to the pandemic. “So we wanted to take that energy and that feeling of loss and turn it into something exciting. The idea is that Gen Z will turn out in historic numbers and use the idea and the motivation and feeling of loss to vote.”

Prom at the Polls spent this “election season,” as Shapiro calls it, encouraging people to head to the polls through social media, merchandise and even a virtual reality prom. Its star-studded social media challenges have garnered over 1.5 million impressions so far.

One Twitter video shares a message from Fred Guttenberg, whose daughter Jaime was killed in the Stoneman Douglas High School shooting.

.@fred_guttenberg has a message for the future heroes and leaders:

This is your moment. pic.twitter.com/fkyaq6Dlnu

In a TikTok video, actresses Danielle Savre (“Station 19”) and Stefania Spampinato (“Grey’s Anatomy”) sport their prom attire for the polls to the song “prom dress” by mxmtoon. Prom at the Polls has partnered with the two TV shows and several other organizations, and is sponsored by the nonprofit OneMillionOfUs, a national youth voting organization.

For a chance to be featured on this page along side the cast of ##greysabc and ##station19 show us how you ##DressUpToVote and tag us! ##PromAtThePolls

Other videos featured #PromPollSals with celebrities challenging people to vote.

Here’s the challenge: if you all can get ##PromAtThePolls trending on tik tok, we will show you all a ##PromPollSal from Ellen Pompeo! Can you do it??

Prom at the Polls has seen success: After the “Grey’s Anatomy” PromPollSal and dress up to vote initiatives, a young couple dressed up, snapped a photo at the polls wearing “I Voted” stickers and tagged Prom at the Polls in a post.

“It was very inspiring to see young people excited about voting,” said Shapiro. “Young people need to understand that every vote counts.”

Efforts haven’t just focused on people of voting age. Prom at the Polls partnered with high schools in New York City and is reposting videos created by the high schoolers on TikTok. Shapiro hopes those too young to vote in this election cycle will get excited about voting in the future and will encourage people who can vote in this election to head to the polls.

“I either had the opportunity to say ‘enough is enough, I don’t like being in this world,’ or kind of embrace it,” she said. “And I kept seeing the good that politics can do and also the bad. I’ve really just fallen in love with public service and just waking up every morning and trying to help other people and trying to inspire other people to use their own voices to do good in the world.”

Aside from her work with the nonpartisan Prom at the Polls, Shapiro supported her father’s reelection campaign with an email message and serves as co-founder and co-president of Pitt Students for Biden.

“The ideas in Judaism about tikkun olam and surrounding tikkun olam are really core values for me,” she said. “The idea that we have an obligation to work toward a better future and toward rebuilding the world is just very important.”

After election day, Shapiro wants to continue engaging young people in the political process, building toward the next elections. But right now, it’s all about this one.

Shapiro voted by mail. But she still has every intention of showing up to the polls in prom attire. She’s on the hunt for a crown or a corsage to sport at the polls, where she’ll encourage people to stay in line and stay excited about exercising their right to vote. PJC