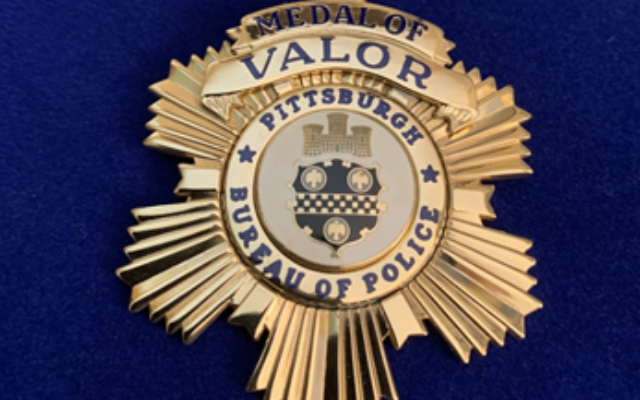 Update: This ceremony has been postponed until Sunday, Nov. 29.

The Act of Valor Award, given to Pittsburgh Police Officer Tim Matson for his bravery in the line of duty during the attack at the Tree of Life building on Oct. 27, 2018, will be donated to the Rauh Jewish History Program & Archives of the Senator John Heinz History Center at a private ceremony, which will be available for virtual public viewing on Nov. 1 at 2 p.m.

The ceremony will include brief remarks, the donation of the Act of Valor Award, and reflections of the meaning of historic artifacts, according to a press release.

The ceremony can be viewed on the History Center’s website.

Matson was among the initial responding police officers at the scene of the Oct. 27 attack, the most violent act of anti-Semitism in the history of the United States. He was wounded alongside officers Michael Smidga, Daniel Mead and Anthony Burke. Matson and his fellow officers received the Act of Valor Award for their bravery in November 2019.

Matson gave his award to Daniel Leger, a member of Congregation Dor Hadash who was wounded in the attack and with whom he had formed a friendship. Leger is donating the award to the Rauh Jewish Archives “to publicly commemorate the bravery of the officers,” according to the press release. PJC