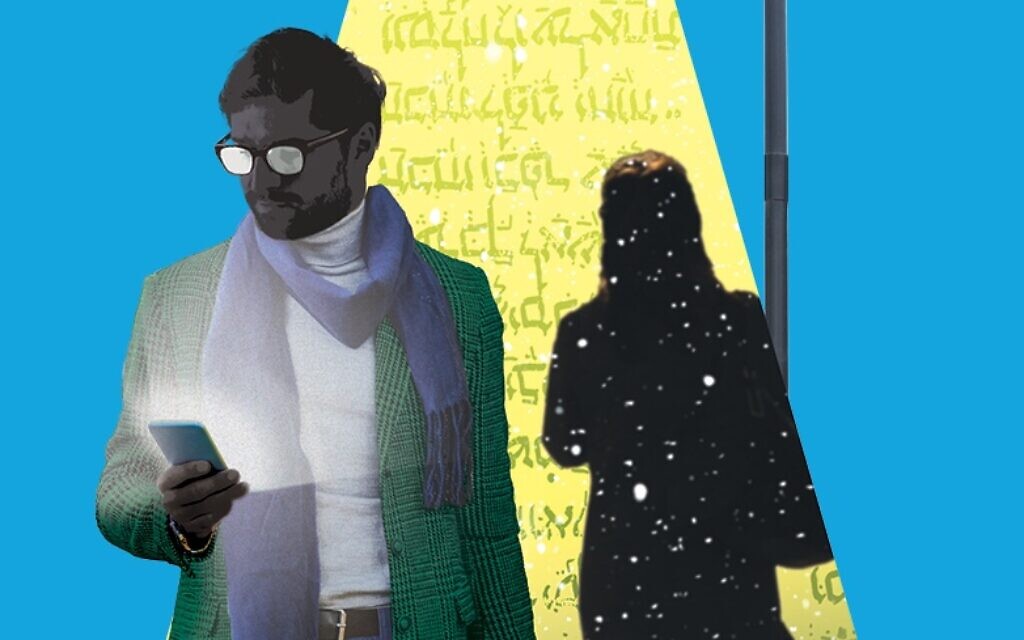 Promotional art for “The Wanderers” (Image provided by City Theatre)

“The Wanderers,” the latest work from Brooklyn-based playwright Anna Ziegler, uses the lenses of Judaism and Jewishness to paint a portrait of connection.

“It’s the story of two couples, two Jewish couples — one is a Hasidic couple and one is a secular couple,” Ziegler told the Chronicle. “The play is about how we are all more the same than different. And there’s a universal search for meaning in our lives.”

City Theatre Co. recently announced that the Ziegler play, which is set to open at the Roundabout Theater in New York City, will have a Pittsburgh run from Nov. 26 to Dec. 18.

Ziegler — whose most famous work, the widely produced “Photograph 51,” starred Nicole Kidman on London’s West End and was awarded the best play of 2019 by the “Chicago Tribune” — was raised in a Reform Jewish household in Brooklyn, growing up near Orthodox Jews in the Hasidic center of Williamsburg.

As an adult, she said she became fascinated by the concept of arranged marriage within the faith — a point which triggered extensive research for what would become “The Wanderers.”

Ziegler wondered, “Just how difficult is it to leave the community, if that is something you want to do?’ It’s pretty revelatory,” she said.

The playwright did not see herself as entirely separate, though, from the conversation; in fact, she said she “viewed all of us as Jews on a continuum.”

“I thought I was in one place on that spectrum and Hasidic Jews, who were following the Hebrew laws to the letter, were in another,” Ziegler said. “My faith was more flexible than that.”

“The Wanderers” finds Hasidic couple Esther and Schmuli contemplating intimacy on their wedding night. It also revolves around a more secular couple of Jewish novelists, Sophie and Abe; Abe begins a flirtatious correspondence with a film star — and everything unfolds.

The secular relationship, Ziegler said, “is a marriage that has various pressures inside of it.”

Ziegler didn’t want to detail much of what occurs in the play, citing the desire to keep the audience on its toes and, yes, in the dark a bit. But she’s excited to be working with City Theatre and plans to trek to Pittsburgh periodically to be as involved in the production as the cast and crew dictate.

“We’re all big fans of her work,” said Clare Drobot, artistic co-director of the Pittsburgh company. “We read this play and fell in love with it.”
“What’s great about Anna’s writing,” she added, “is it’s an inter-generational exploration — it’s a universal story about love and family and legacy.”

Ziegler said she “was thrilled they were interested in this one.”

“The people who work at City Theatre, I really like,” she said. “I’ve really enjoyed the times I’ve been in Pittsburgh. The audiences are terrific. It seemed like a no-brainer to me.”

“The Wanderers” premiered at the Old Globe in San Diego and has played in various locations, including to Jewish audiences in Israel.

Ziegler is modest about her plays’ successes and talks about her early experiments with poetry, which were highly narrative-driven and featured lots of dialogue — both touchstones of playwrighting.

“I think it sort of evolved,” she said. “[Writing plays] is a lot less lonely than writing poems … I love seeing this thing that was just in my head come to life. I’ve always found theater magical.” PJC