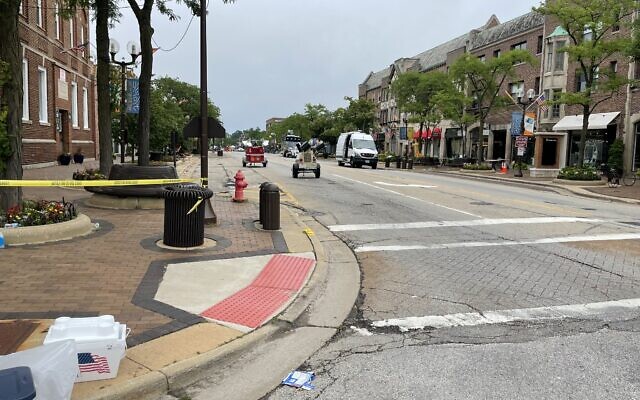 Highland Park, Illinois. Photo by *Hajee at Flickr at https://rb.gy/efovev

Anecdotes, b-roll footage and photographs have characterized Highland Park as a sleepy suburb whose serenity was violently shattered during a July 4 attack on Chicago’s North Shore. For Pittsburghers, and Squirrel Hill residents in particular, the national media’s narration of how a mass shooting horrifically transforms a community isn’t just a stark reminder of Oct. 27, 2018, but a baffling provocation.

Beverly Siegel told the Chronicle that instead of relying on national broadcasters for information about the Independence Day attack that left 7 dead and 30 wounded, she watched local affiliates.

“It’s all personal, it’s all hyperlocal,” and that’s something both Pittsburghers and now people in Highland Park unfortunately understand, she said, speaking from her Chicago apartment.

Siegel splits her time between the Second City and Squirrel Hill. While Siegel doesn’t live in Highland Park she has many friends and acquaintances who do, including one colleague — a Highland Park resident who attended the parade — who shared what it was like taking shelter in a Pilates studio during the attack.

Siegel knows the storefront’s location, as well as the intersections along Central Avenue where parade watchers feverishly darted during the gunfire.

Siegel’s husband, Howard Rieger, also knows the area well. As a child growing up in Chicago, summer activities included getting in the car, driving north along Lake Michigan, venturing along Highland Park’s winding roads and then heading back to his family’s “modest apartment” in the city, he said.

With its stately houses and sizable Jewish population, Highland Park was “for many people an aspirational community,” he said.

It’s a place where “people are connected to each other, where people know each other,” he said.

Barkley lived in Highland Park from 2011 to 2017. He remembers how much “civic pride” locals had, but more importantly how dedicated a particular resident was.

Jacki Sundheim, one of the seven people murdered on July 4, was a colleague of Barkley’s at North Shore Congregation Israel. Between 2011 and 2015 Barkley was North Shore’s executive director; Sundheim was the congregation’s events and b'nei mitzvah coordinator.

Located 20 miles north of Chicago, Highland Park has about 30,000 residents. Half its population is Jewish, according to JTA.

Although the attack wasn’t directed at a synagogue, “the people there are feeling the same way we did after Tree of Life,” Barkley said. “The Jewish community there is really huge and very interwoven, and people will feel it for miles around.”

About 500 miles east of Highland Park, Rabbi Ron Symons, of the Jewish Community Center of Greater Pittsburgh’s Center for Loving Kindness, dedicated his July 5 session with the Virtual Senior Academy to creating a “safe supportive space to talk about Highland Park.”

Alongside Ranisa Davidson of the 10.27 Healing Partnership, Symons encouraged participants to sing and read together.

“We knew we had to do something to help folks process it in victim-centered trauma-informed ways,” Symons told the Chronicle. “We are not going to stop all this violence but we can be together in the aftermath, and by being together we are hopeful that we are adding some comfort and courage as we move forward.”

Squirrel Hill resident Rabbi Elisar Admon agreed that coming together is a helpful response to gun violence, but said Jewish community members must also increase their preparedness: “We have to be ready for anything that is coming up. It’s not only Tree of Life anymore.”

Admon is a member of ZAKA — an Israeli-based team of voluntary emergency responders — and in the aftermath of the Pittsburgh synagogue shooting worked with local authorities and the FBI to ensure the victims received respectful Jewish burials. In the years since 2018, Admon has spoken with Jewish communal leaders and members of burial societies nationwide about the infrastructure needed to deal with catastrophes stemming from gun violence.

“Unfortunately it’s going to happen again, and again and again,” he said.

For Pittsburghers, this means there is an opportunity to share with fellow landsmen not only expertise but understanding, Admon explained.

“It’s important for the Jewish community to know that we will support each other,” he said. “So whether it’s offering a comforting feeling or even making a phone call, one act can change a life.”

Rieger agreed that Pittsburghers and members of Jewish communities nationwide can effectuate change. For his own part, Rieger has worked with various civic groups to help residents bolster ties within their neighborhoods. He said that by doing so, he’s trying to “make things a little better.”

Through involvement in organizations like Jewish Neighborhood Development Council of Chicago, a group that works toward strengthening the city and communities in surrounding suburbs, Siegel said she’s trying to help out on a local level but is fatigued by the daily toll of gun-related deaths in America.

This year alone, there have been at least 314 mass shootings — an average of nearly 1.7 mass shootings per day — according to the Gun Violence Archive.

“It just makes me so sad because I don’t see a solution to it,” Siegel said. “At the moment I feel safe. But we are only as safe as we are at this very second and that can change on a dime.”

Ranisa Davidson of the 10.27 Healing Partnership encouraged Pittsburghers not to give up hope.

“It’s horrible to watch another community grieve through the violence we all know…and it’s easy to retreat into your own corner but what we know is that healing can occur when we are in community together,” she said.

Whether its neighbors, family, friends or organizations, there are networks of people all across Pittsburgh able to offer support. And even though the imperative may feel rote by now it bears repeating, Davidson continued. “Make sure not to suffer alone, seek resources, take care of your own mental health and look for the good.” PJC