On June 20, Pittsburghers came together in person for the first time in two years to celebrate World Refugee Day.

Led by Jewish Family and Community Services and other Pittsburgh organizations, the global holiday was recognized with food, music, dancing and more at Schenley Plaza.

Under the big tent in Oakland, dozens of performers and speakers, ranging from the leaders of the area’s four largest resettlement agencies to Allegheny County Executive Rich Fitzgerald, shared the importance of accepting refugees into Pittsburgh’s communities.

“Pittsburgh has now changed again with a lot of opportunities,” Fitzgerald said. “But along with those opportunities, people want to feel welcome. People want to go to a place where they can find folks who have similar backgrounds to them, similar cultures, similar ways of celebrating their faith.”

Nearly 40 tents and vendors and tents ranging from the Carnegie Museum to the Samovar Halal Restaurant were spread across the plaza. The JFCS tent included arts and crafts, where kids were encouraged to make a tile that shared welcoming messages to immigrants and refugees.

For the past few years, JFCS had taken the lead role in organizing Pittsburgh’s World Refugee Day celebration. When Ivonne Smith-Tapia, the director of refugee and immigrant services at JFCS, addressed the crowd, she emphasized the day’s goal of honoring the millions of people who are displaced worldwide. 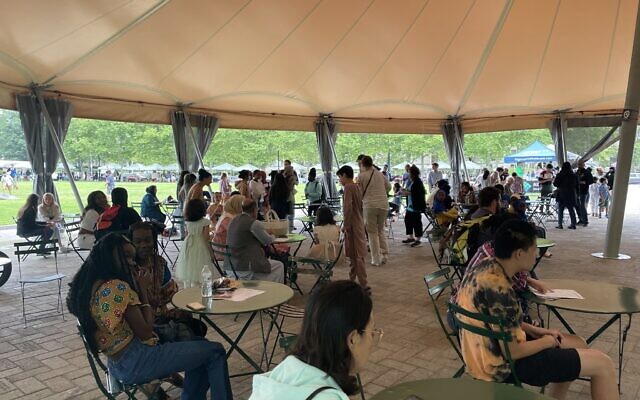 Pittsburghers gathered in Schenley Plaza to celebrate the region’s refugees and immigrants. (Photo by Ethan Beck)
“We hope that today you experience a little bit of the world and you have access to stories, to community, to diversity,” Smith-Tapia said. “This is why Pittsburgh is Pittsburgh.”

During the past year, much of her work at JFCS has focused on helping the many refugees from Afghanistan, Ukraine and other countries. But the World Refugee Day event isn’t about the organizations behind the event, Smith-Tapia said.

“[Today is] about refugees … it’s about telling people from all over the region that refugees are here, that they are part of our communities,” she said. “It’s not about our agency; it’s about the work that we do and why we’re doing it.”

Sarah Siplak, the refugee caseworker supervisor at JFCS, said events like World Refugee Day are important, but that much has to change on a structural level.

“Pittsburgh has always somewhat touted itself as a welcoming city, but there’s a lot of work that needs to be done,” Siplak stressed. “With the Afghan crisis, we had an influx of refugee families and they were in temporary housing, otherwise known as hotels, for upwards of six months. I think the biggest thing we’re up against right now is finding affordable housing. This city really struggles with being equitable.”

Back under the main tent, the stories of refugees from countries like Bhutan, Russia and Uganda were being shared.

Lais Alexander, a Portuguese immigrant who works at the nonprofit The Global Switchboard, came to Pittsburgh in 2014. She noted how each immigrant’s story isn’t the same and that challenges from health care to education affect everyone differently.

“I had a lot of support, which is not the reality for many immigrants,” Alexander said. “[Refugees in Pittsburgh] have a big system ready to help, so we’re grateful to see that that happens. But we know that we’re not enough. I do hope we can keep working to provide and to minimize those obstacles.” PJC