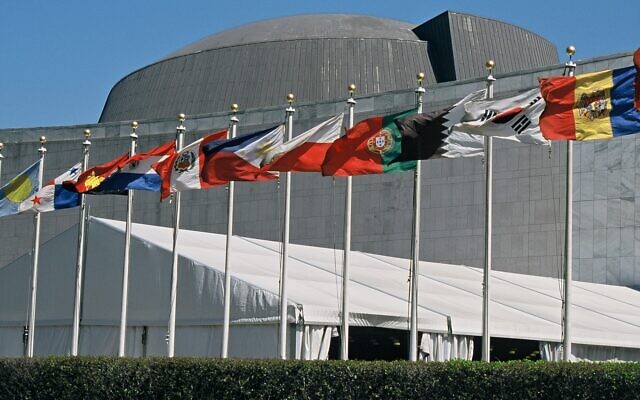 The United Nations headquarters in New York, 2007 (Photo by I, Aotearoa, creativecommons.org/licenses/by-sa/3.0/>, via Wikimedia Commons)

The Jewish Federation of Greater Pittsburgh has signed onto a letter in response to the recent Amnesty International report accusing Israel of apartheid. The letter, written by the Jewish Federations of North America, calls upon the U.N. secretary general to make a clear statement that it is unacceptable for U.N. institutions to use their global platform to unfairly target Israel and that the Amnesty report should not be used by the U.N. or its bodies.

As of Feb. 3, almost 200 Jewish organizations from around the country had signed onto the letter.

The text of the letter follows.

We write to you regarding the disturbing open-ended United Nations Independent International Commission of Inquiry on the Occupied Palestinian Territory, including East Jerusalem, and Israel [COI]. The recent issuance of the one-sided and biased Amnesty International UK [Amnesty] report accusing Israel of being an “apartheid” state, the type of document that is often used by the United Nations Human Rights Council to levy an excessive number of accusations at Israel, has made clear the dangerous implications of the Council’s open-ended inquiry.

The Amnesty report traffics in false claims against the sole Jewish state, distorts international law, questions the very existence of Israel, and ignores the violence and terrorist assaults on Israeli civilians – Jewish, Muslim, and Christian. We are very concerned that this report will be positioned to influence the COI and lead to a review by the International Criminal Court of a democratic country in which multiple faith communities live under the rule of law, participate in civic life, contribute to the economy, and serve in the highest levels of government. Amnesty calling for the UN Security Council to impose a military embargo on Israel sends a clear message to this effect.

You lead a vaunted institution established on the ashes of World War II, after the world witnessed the devastation of global conflict and the atrocities of the Holocaust. The UN has the opportunity and responsibility to uphold ethical values and practices that contribute to a peaceful society. But if the UN and its organizations allow irresponsible and biased investigations such as the COI to proceed, they seed a platform for harmful reports such as the one by Amnesty, create a narrative used too often for antisemitic attacks, and undermine important steps toward peace such as those embodied by the Abraham Accords.

It is disturbing – and dangerous – that the United Nations continues to exhibit bias against Israel. In any one year, the General Assembly adopts numerous one-sided resolutions targeting Israel and only a miniscule number against any of the other member states for human rights violations. The Human Rights Council focuses an astonishing 20% of its resolutions on Israel and maintains Israel as a permanent agenda item. Even with respect to the Security Council, United States Ambassador to the United Nations Linda Thomas-Greenfield had noted “[Israelis] interpret the overwhelming focus on Israel in this body as a denial of Israel’s right to exist and an unfair focus on this one country – and they are correct.”

It was deeply meaningful to us that in 2017 at the Museum of the Jewish People, you said “let me stress that when I talk about antisemitism, I include calls for the destruction of Israel. Israel is a Member State of the United Nations. It bears all the responsibilities and enjoys all the rights of every other Member State and, therefore, it must be treated as such.”

We call on you to use the moral authority of your high office to make a clear statement that it is unacceptable for UN institutions, including the Human Rights Council, to use their global platform to unfairly target Israel. Such inexcusable targeting undermines peace in the Middle East and contributes to a narrative that can foment antisemitic bias. In that spirit, we ask you to urge the Human Rights Council to terminate the Commission of Inquiry and make clear that the Amnesty report should not be used by the UN or its bodies to further unfairly attack Israel.

We appreciate your attention to this matter.” PJC