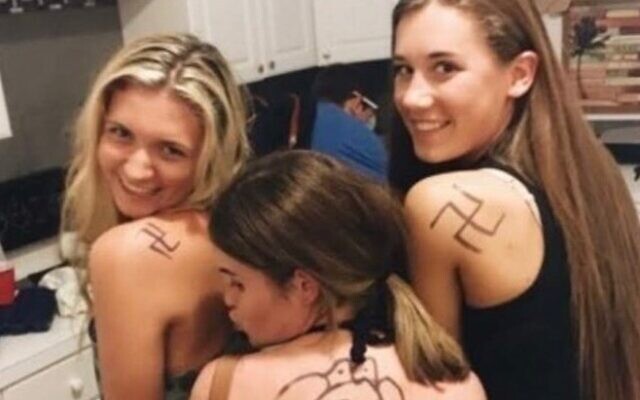 Penn State University student and friends sport swastikas drawn in marker on their shoulders, leading to condemnation from the university and fellow students. (Change.org)

(JTA) — A photo of a smiling young woman with a swastika drawn on her shoulder has drawn a condemnation from Penn State University, where the woman is reportedly a student, and a petition calling for her expulsion.

The student, identified in reports as Ryann Milligan, reportedly posted a photo to Twitter last week in which two women are seen with black swastikas on their shoulders. The account from which the tweet reportedly came has since been restricted.

In a tweet, the university called the post “deeply disturbing and sickening” and said it would be contacting the person involved. Meanwhile, a petition on the website Change.org calling for the student’s expulsion from the university had over 134,000 signatures as of Sunday.

“This photo is terrifying and extremely threatening, and it is not to be taken lightly,” the petition reads. “Ryann Milligan does not even begin to uphold the values of Penn State. Allowing her to remain a student of Penn State is a disservice to all Jewish people, living or dead. It sends the message that antisemitic actions and ideals are accepted by the university, and that Penn State doesn’t care about protecting its Jewish students, as well as other oppressed and underrepresented minorities.”

The university tweeted on Monday that the “reported anti-Semitic post is deeply disturbing and sickening. The Univ is contacting the individual alleged to be involved. The Penn State community can visit http://equity.psu.edu for a wide range of resources. We will continue to speak out against hatred and intolerance.” PJC