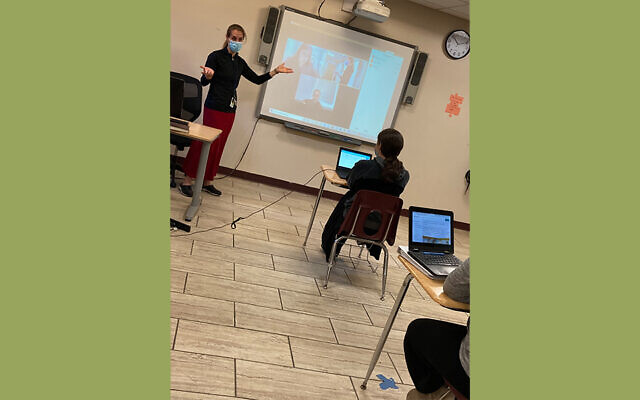 “Resilient” is the word Sonja Wimer most often uses to describe the 2020-2021 school year.

Wimer’s teaching career began in 2008 and she has taught at Hillel Academy for the last seven or eight years. Even though COVID-19 necessitated changes in routine, she said that teachers, staff and students have met the challenges, herself included.

“I’m not the most tech savvy person but I learned how to use Zoom and screen share and show clips and videos and maps and breakout rooms,” said Wimer, who lives on the North Side with her husband and son. “We were given a lot of knowledge as soon as it was available. That helps.”

Wimer knows that not everyone agrees with her take on the last year.

“It might not be the most popular answer,” she said, “but it hasn’t really been that bad.”

While there has been a lot of talk in the wider community about a “lost year,” Wimer does not think Pittsburgh Jewish day school students have suffered. Rather, she believes that because the schools decided to meet in person and their faculties learned how to pivot to a virtual environment when needed, the students are having a productive year. The pandemic, Wimer said, forced teachers to become more creative with their lesson plans, especially during periods when they knew they would be teaching virtually.

One advantage Wimer had going into this year of shifting learning environments was the strong relationships she had built with her students, she said. Since she teaches both middle and high school students, she sees the same students multiple times throughout their school career.

Wimer, who teaches both sixth grade and high school AP social studies, said there hasn’t been a need to cut any of the curriculum, even though at times the entire school day was spent online.

In addition to the education of her students, their safety has always been a primary concern, even prior to COVID.
“It’s just that now there’s an added layer to it,” she said.

It was out of concern for the students’ welfare that she supported the return to in-person learning. Students, she said, “desperately” wanted to return to the classroom.

Because of the students’ enthusiasm, the school was able to make the year work, Wimer said.

“There was a lot of worry and fear, but because everybody has just been so fully on-board with following protocol and trusting the science, the year overall has actually been fairly successful.”

Hillel Academy leadership has worked hard to maintain safety requirements so that both teachers and students felt comfortable, Wimer explained.

“I remember over the summer, I was helping with camp and Rabbi [Yisroel] Smith was literally measuring with a yardstick all the classrooms to see how many desks could technically fit,” she said.

That has been typical throughout the year, Wimer said, with school administrators taking charge of safety measures so that teachers could focus on students.

Wimer got the COVID-19 vaccine early with a leftover dose from a clinic when the state was primarily inoculating healthcare workers. It felt as if a weight was lifted from her shoulders, she said.

Masked or unmasked, virtual or in person, Wimer thinks that the pandemic has proven the business of education to be an example of that word she keeps returning to: “resilience.”

“There’s always going to be people figuring out new innovative ways to continue education no matter what obstacles get in the way,” she said.

Well, except maybe one old standby: the snow day.

“I do think that part of childhood is playing in the snow when there’s snow, and we don’t get a whole lot of it anymore,” she said. “I think that, especially in the face of all these challenges, you do have to remember to have a little bit of fun.” PJC