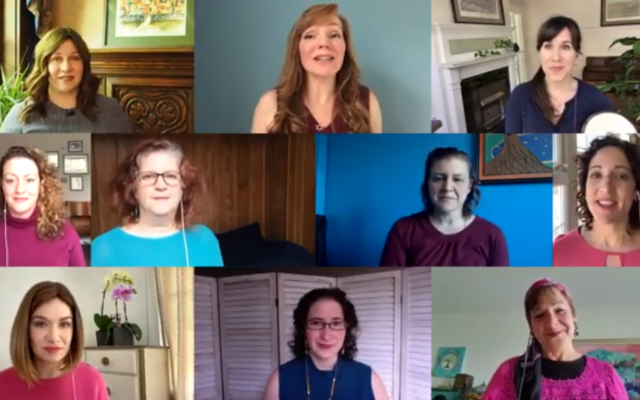 The a cappella group Kol Shira will be featured in a prerecorded performance during the Sound of Jewish Music. Photo provided by Chani Altein.

Lynn Berman is no neophyte when it comes to performance.

The Squirrel Hill woman, a teacher for the Allegheny Intermediate Unit by day, leads local classes in Israeli dance and has performed for years with the Jewish a cappella group Kol Shira.

Even she admits, though, that the task of mounting a virtual concert’s bravura finale is a bit of challenge.

At 7:30 p.m. on June 9, audiences will tune into YouTube to listen as The Sound of Jewish Music annual women’s concert goes online in the time of COVID-19 and social distancing. It’s Berman’s job that night to use a prerecorded session to bring down the house.

“What we should get in the end is a really beautiful montage of everybody singing together,” Berman said. “It’s always been a feel-good moment at the end of the concert – it’s really, really rewarding.”

Chabad of Squirrel Hill’s Chani Altein initially wasn’t sure what COVID-19 would do to the annual women’s concert, which has been a staple of Jewish Pittsburgh for nearly a decade.

“I thought, ‘This has been my favorite event of the year for the past nine years but I guess we’ll have to hold off this year,’” said Altein, the event’s producer and main organizer. “Then, someone recommended we do it virtually.”

The women volunteers for this event – this year, it’s free to watch, though registration online is required – aren’t just doing it virtually, they’re doing it big time and with style. The evening will feature performances by some 20 women from across the spectrum of Pittsburgh’s Jewish community, as well as the group Kol Shira. There will a coronavirus parody of the camp song “Hello Muddah, Hello Faddah,” and words of inspiration from Shelly Itskowitz, whose brother battled COVID-19 in a monthlong coma, and others. The work of local artists will be displayed and Maria Caruso of the Squirrel Hill dance studio Bodiography is slated to perform a dance number.

If anything, Altein said, the virtual format freed up the women to do things that geographically used to hamper them. This year, women will be singing from throughout Pittsburgh, as well as from Israel and the United Kingdom.

“It’s a great opportunity to showcase women in the community who don’t often get to perform publicly,” Altein said.

One of the women showcased will be both familiar and, in at least one sense of the word, foreign.

Amy Schwartz, a mother of seven and grandmother of eight, lived in Pittsburgh for about 14 years after living in Atlanta. She made aliyah to Israel about five years ago.

Schwartz will set her alarm for 2 a.m. June 10 in Jerusalem to watch her singing performance with Kol Shira take place online.

“It was fantastic – I love them and I loved singing with them. Of all my musical experiences in my life, that was the most exciting,” Schwartz said. “This is very, very dear to me.”

Berman, the woman tasked with orchestrating the virtual finale, stressed The Sound of Jewish Music is far from the work of amateurs.

“Year after year, the music has gotten better and better,” said Berman. “It’s one of those events where I tell people, ‘You’ve got to hear this music! It’s really good!’”

What Altein, Berman and others stressed, though, was the sense of community that connects the evening’s performers. There are Orthodox Jews and Reconstructionist Jews and some who consider themselves unaffiliated. Some women are socially liberal, some conservative. (The organizers ask that no men view the performance, as some women’s religious beliefs discourage them from singing in front of men, Altein said.)

“We come together over the music,” said Berman. “We’re all there, singing together and that’s what brings us together. It’s a whole range of the face of this Jewish community.” PJC