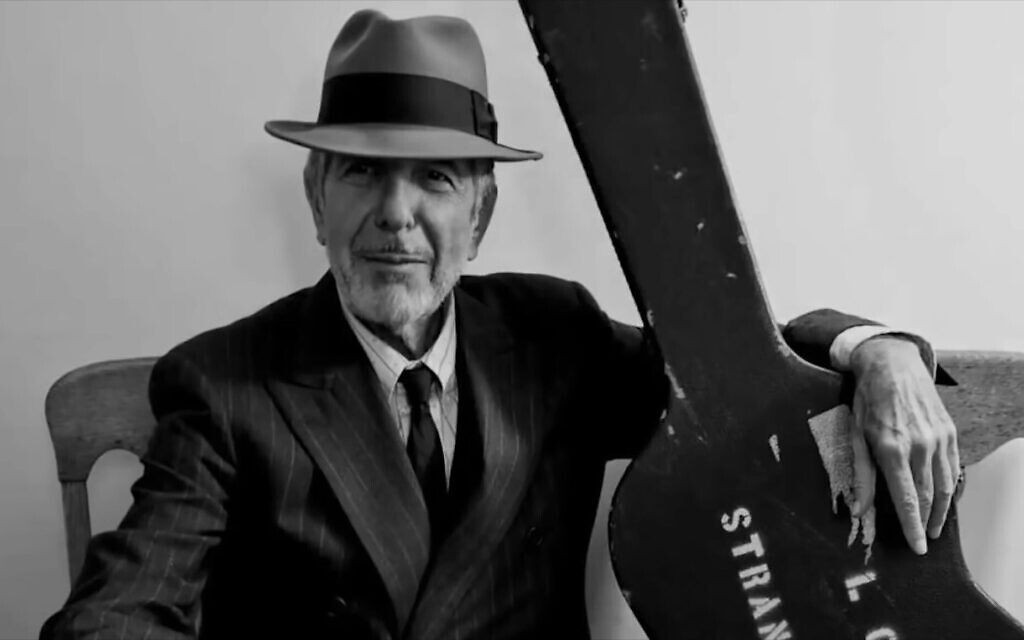 Leonard Cohen ready to go out on tour, circa late 2000s. (Photo courtesy of Sony Pictures, via Cohen estate)

Much has been made of the way the late Canadian singer-songwriter Leonard Cohen wrestled with faith. From songs like “Who By Fire” to “You Want it Darker,” critics and scholars paid close attention to how Cohen’s Jewish roots influenced his contemplative, often spiritual lyricism.

The new documentary “Hallelujah: Leonard Cohen, A Journey, A Song” tries to find a fresh angle on Cohen’s storied career. Directors Daniel Geller and Dayna Goldfine take his famous single “Hallelujah” and use its rise in popularity over the years as a lens for looking at his entire discography, his Judaism and the way his songs still carry influence.

“Hallelujah: Leonard Cohen, A Journey, A Song” played at the recent Tribeca Film Festival and opens in limited release on July 1. There’s no word yet on when it will play Pittsburgh.

The film starts by taking a look at Cohen’s career as a writer in the late 1960s and follows his transition from poet to songwriter. At one point, Cohen says he thinks he has a song, then plays his classic “Suzanne” for fellow singer-songwriter Judy Collins.

Early on, a radio host is quoted as saying that Cohen’s whole career is pulled between holiness and sensuality. Much of the film’s first act follows those tenets, weaving discussions of albums like “Songs from a Room” and “New Ceremony for Old Skin” with those of his personal and religious life.

While the documentary covers Cohen’s romantic relationships with interest, some of the more intriguing parts focus on his faith. Interviews with Cohen’s rabbi, Mordechi Finley, and other scholars illustrate the way he blended the biblical with the personal in his lyrics.

Even though the documentary often relies on modern interviews, “Hallelujah” is at its strongest when it lets Cohen speak for himself. Old footage and interview clips allow him to talk about his life with an eloquence and certainty that few can match.

“I was so touched as a child by the kind of charged speech I heard in the synagogue, where everything was important,” Cohen said. “The world was created through words and through speech in our tradition.”

The second half of the film focuses on the creation of Cohen’s most famous song and the film’s namesake. Cohen’s painstaking process of writing the lyrics for “Hallelujah” is emphasized throughout.

“The word ‘Hallelujah’ is so rich,” Cohen explained. “It’s so abundant. People have been singing that word for thousands of years just to affirm our little journey here.”

The directors interview the song’s producer, John Lissauer, who asserts that “Hallelujah” was initially seen as a failure. When delivering the album “Various Positions” to Columbia Records, the record label’s president infamously said, “Leonard, we know you’re great, but we don’t know if you’re any good.”

But “Hallelujah” had at least one champion: Bob Dylan, who started performing the song in concert. Dylan kicked off a series of great musicians covering “Hallelujah,” leading to John Cale, Jeff Buckley and others trying their hand at Cohen’s tune. These covers, along with the inclusion of the song in the film “Shrek,” helped turn “Hallelujah” into a modern classic.

To emphasize the song’s ubiquity, Geller and Goldfine include a supercut of each time “Hallelujah” was covered in a singing competition. Even Cohen talked about how strange the song’s journey was.

“A certain mild sense of revenge rose in my heart,” Cohen said, when asked about the song’s new popularity — considering it was initially rejected by record label executives. “I think people ought to stop singing it for a while, though.” PJC