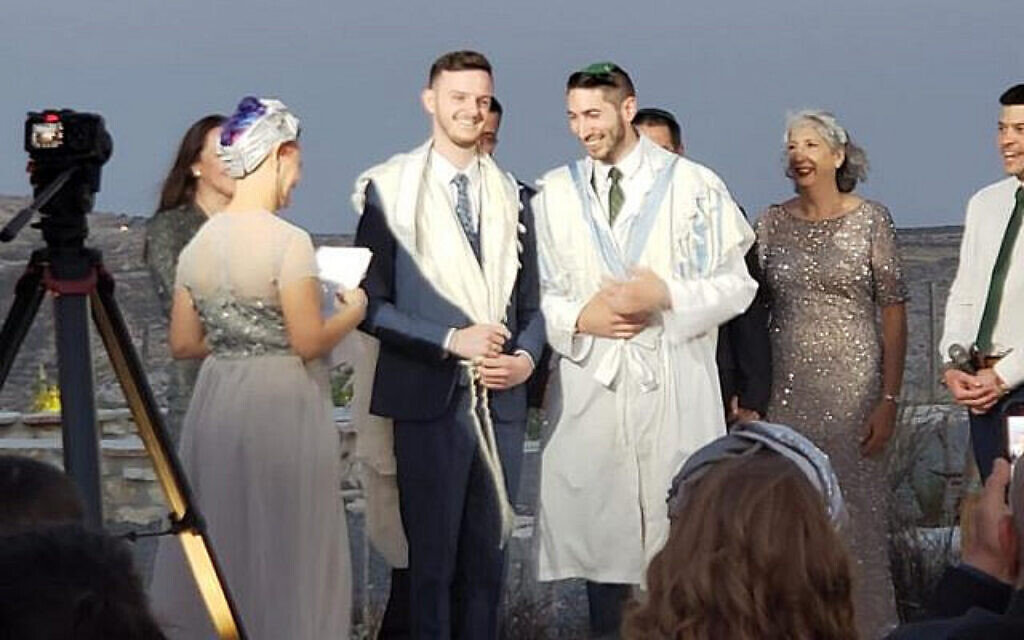 The title was meant to catch your attention, not to make a joke about something so serious. Honestly, I never intended to write publicly about my son’s wedding to his love, his partner in life. But because of a certain rabbi (who I will not dignify by naming) I’ve decided that I will add my voice to those who support my child and all those like him seeking to build a Jewish family in a Jewish state or anywhere else in the world for that matter.

Last month, on a gorgeous hilltop in Jerusalem mountains, surrounded by more than 200 friends and family, some who came from around the world, my son and his husband were married in a bespoke service written by a close friend, one who is really a family member as she and her husband were my son’s adopted family when he served as a lone combat soldier in the IDF. Yes, my son and his husband both served as lone soldiers, defenders of the Jewish homeland, the holy land. (I certainly don’t see anyone complaining that they were protected by my son.) Under the chuppah friends and family gave them blessing for a long and happy marriage, not a happy gay marriage, but a happy and long-lasting union of two people who love each other.

As my husband and I joyously walked our son to the chuppah I became teary, unexpectedly overcome with the realization that my sweet son was getting what he had always wanted, a partner to share his life with. But it wasn’t the only reason my tears flowed; when he first came out to us, my greatest worry was that he would never be able to have what his heart truly desired — to be an observant Jew with a partner he could be married to and children he could bring up in an observant community. I feared that he would have to give up his Jewish observance in order to have the family he wanted. I’ve told him many times in the last few years how lucky he was to have come of age at a time when he could marry and have children. And how wonderful it is that he has found a warm and welcoming community to be a part of. This couldn’t have been more apparent as I watched them, with their friends, their community, daven mincha before the ceremony.

Since we announced his engagement, I have been pleasantly surprised by some of the people, friends, and acquaintances, who wished us a mazel tov, people I didn’t think would be “on board” with such a union. And I can’t tell you how many people came over to me during the reception to tell me how meaningful the ceremony was and how they cried with joy. This beautiful ceremony was followed by a fantastic party where they were celebrated with much ruach, dancing and schtick. A joyous complement to a very special ceremony.

As for those who would publicly denounce and disdain the building of a Jewish family, I’ve long since decided and I don’t care what other people think. Unfortunately, I know that my son has been hurt by some he thought to be friends who have decided to express their disapproval. I don’t wish any of these people ill, but I do wish them away. Away from my son and his husband, and away from anyone else they might hurt.

Over the last few years, I’ve watched as their partnership has strengthened and their love for each other has grown and matured. How dare anyone tell them that their love is not real or “normal.” They are very much looking forward to adding children to their family and I know that one day they will be amazing parents — my son will be the soft one, the one the kids go to when they want an immediate yes, my son-in-law will pretend to be the tougher parent, but in the end will be a softy, too. We can’t wait.

May my children, and everyone’s children be blessed to build a , a faithful home among Israel. PJC

Stacie Rojas Stufflebeam is a the mother of five sons, four of them are veteran lone soldiers in the IDF. She is executive director of the Michael Levin Lone Soldier Foundation. and lives with her husband in Pittsburgh. This first appeared on Times of Israel.