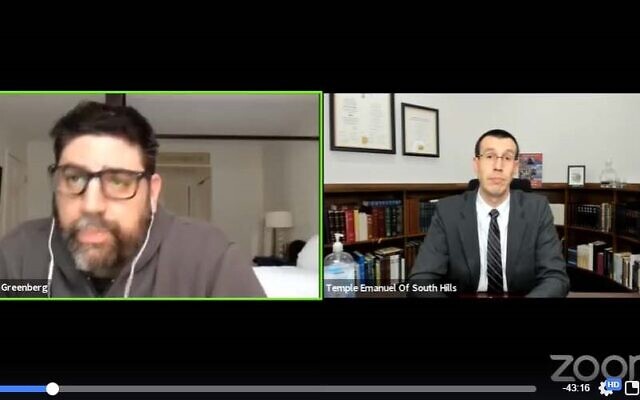 It used to be enough tor a rabbi to be an expert in the Torah, Talmud and Hebrew, while boasting a liberal understanding of psychology. These days, they also need expertise in Zoom meetings, Microsoft Teams, Google Meet and Facebook Live.

In addition to guiding b’nai mitzvah students and leading services, religious leaders are now answering questions about bandwidth and latency issues. Many also have become content creators in the age of COVID-19 as Jewish communal connection has largely moved online.

As synagogue engagement has expanded beyond the building’s physical walls, and beyond its membership rolls, many rabbis and lay leaders are convinced that Jewish institutions will continue to embrace the new technology and engagement models that they have relied on during the spring of 2020.

The genie is out of the bottle, according to Temple Emanuel of South Hills Rabbi Aaron Meyer.

“COVID-19 and the use of technology to keep a community connected in response is going to be disruptive to membership models in many organizations, including synagogues,” he predicted. “Whether they are snowbirds or former members still connected to the synagogue or the many Jews of the South Hills who are looking for more episodic, meaningful Jewish connection, the use of technology to reach beyond our walls enables us to meet people where they are in a very different way.”

Meyer has been on the forefront of the local Jewish digital landscape, offering programming and content daily for Temple Emanuel’s members as well as the larger community. He has interviewed congregation members involved in the coronavirus fight, politicians, journalists, sportscasters and other religious leaders.

Meyer, who began his tenure at Temple Emanuel last June after serving a large congregation in Seattle, has had a demanding year. In addition becoming acclimated to a new city, learning the names of every member of his Reform congregation, and making connections with community leaders throughout Greater Pittsburgh, he also had to figure out how to conduct interviews online, broadcast Shabbat services on YouTube and Facebook Live and teach Torah Study on Zoom.

While most of the people currently accessing Temple Emanuel’s online programming already have an established connection with the congregation, going forward, an expanded virtual community might be created that includes others, Meyer predicted.

“My hope is that as more people join us virtually, they will continue to find those sources of connection that allow them to build their community locally,” he said.

There is a need to embrace the new technology and to continue to engage members across the various digital platforms, said Tree of Life*Or L’Simcha Congregation Rabbi Jeffrey Myers. But, he quickly pointed out, congregations are different, with different requirements.

“There are a number of considerations, the age of our membership, our physical plant…each has to come up with an appropriate plan that reflects their own congregants and business needs,” Myers said.

Despite the differences, “there will be an increased presence of technology,” Myers said. “It will be in different ways, but part of that will reflect what has been going on in the congregation for the last 10 weeks. For example, if you were already using video conferencing for meetings, it is likely to continue in some manner. I would say the same thing for classes and even services. I’m expecting some sort of hybrid model.”

As Conservative congregations move forward, they will be forced to grapple with the intersection of technology and halacha.

The Rabbinical Assembly’s Committee on Jewish Law and Standards, on March 17, issued guidelines on conducting “remote minyanim” through “electronic means.” Two months later, the committee formally approved the use electronic devices to stream worship services on holidays and Shabbat. Noting the “unprecedented time” brought on by the virus, the movement’s Jewish law authorities said they would allow livestreaming with a number of caveats, including that the equipment be set up in advance or that a timer be used to avoid the active use of electricity on Shabbat and holidays, when it is traditionally forbidden

The ruling, written by Rabbi Joshua Heller of Congregation B’nai Torah in Sandy Springs, Georgia, notes that it is applicable to the current situation only and that “its conclusions will need to be reassessed as we transition to a ‘new normal.’”

Rabbi Alex Greenbaum of Beth El Congregation of the South Hills doubts the Conservative movement will go back to its pre-COVID 19 stance prohibiting streaming on Shabbat and holidays.

“With all these people coming to our services – I have homebound people and bedridden people coming, as well as people from Florida, North Carolina, Arizona, people who are in the hospital are coming to services. I can’t imagine telling all these people, ‘well it’s nice seeing you, see you in 100 years when we have the next quarantine,’” Greenbaum said.

Although the Chabad centers do not stream Shabbat or holiday services or create virtual minyans, they have increased the amount of programming available online. Rabbi Mendy Schapiro of Chabad of Monroeville thinks that a hybrid combining online participation with physical classes will be a likely model moving forward.

“I think there will be some in-person class events, but I believe almost every class we have will have to also be broadcast on Zoom for anyone that doesn’t feel comfortable coming out to be able to participate,” Schapiro said. “None of the Chabads or Orthodox shuls are going to broadcast on Shabbat.”

Chabad programming has increased since the beginning of the stay-at-home mandates, with an increase in collaboration between Chabads across the city for virtual events. All of the local centers recently participated in a Zoom meeting with Rivka Slonim, education director at the Rhor Chabad Center of Binghamton University about the Netflix series “Unorthodox.” The event was watched by more than 200 “attendees.” Shapiro believes these type of community events will continue post-COVID-19.

“Whatever we can do to keep the community Jewishly engaged – whether it’s classes, cooking programs, Shabbat packages. We’re trying to be there to help people in whatever way we can,” he said.

One good thing coming out of coronavirus crisis, according to Adam Hertzman, Jewish Federation of Greater Pittsburgh marketing director, has been the recognition of the “absolute demand for online programming, activities and events.”

Through virtual programming, the Federation has engaged community members “who we don’t often see but are more than willing to come to an online event,” Hertzman said, opining that the future will be built on hybrid events across multiple platforms.

“For certain we will be doing more virtual events than we did,” he said.

Part of Federation’s mission includes raising money and allocating funds to build community. Hertzman said that mission continues, regardless of whether it takes place in person or through other, new methods.

“We would still love to meet people in person,” he said. “Fundraising is all about relationships and it’s tough to replicate that without meeting someone in person. Our fundraisers are still raising money today. In the absence of being able to visit someone, a video conference still allows you to engage with somebody, but it’s not the same as visiting their home or joining someone for a meal.”

The coronavirus pandemic will have a long-term impact on Judaism according to Temple Emanuel’s Meyer.
“What were the disruptive times in Jewish life? The destruction of the Temple, the expulsion from Spain, the Holocaust. COVID-19 is going to have the same effect on the Jewish community,” he said. PJC