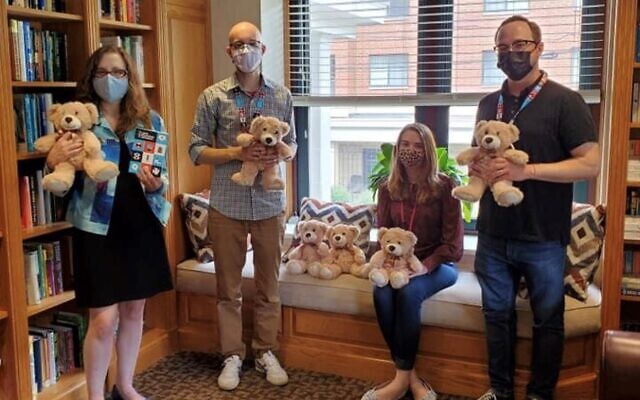 Shulamit Bastacky believed that every child should have a teddy bear.

As a child during the Holocaust, Bastacky was hidden from the Nazis by a nun in her native Poland. She spent the first several years of her life isolated and without much human touch. Neither did she have a favorite stuffed animal to bring her comfort.

“I remember wheeling Shulamit in,” Vensel told the Chronicle. “You could hear a pin drop. There’s like, 400 middle schoolers and they were all like, ‘This is an actual person? This is the lady we were talking about?’ It sticks with them.”

Vensel has taught students about the Holocaust for the last 15 years. About a decade ago, he and several of the school’s social studies teachers began looking for a way to make the lessons more engaging. They created “Remembrance Assemblies,” working with the Holocaust Center of Pittsburgh to bring survivors to the school.

“A lot of times, when we go through this unit, the kids look at me and say, ‘Mr. Vensel, what are we supposed to do with this? What am I supposed to do with this knowledge? I feel terrible learning about it and understand it, but don’t know how to take this with me,’” he said. “The Teddy Bear Project is a nice way for the kids to honor the legacy, especially this year.”

Because of COVID-19, the project was paused last year, but Vensel felt it was important to restart it to honor Bastacky’s memory, he said. Instead of collecting new teddy bears from the students, Vensel used part of a grant from the Light Education Initiative — which provides opportunities for students to take leadership roles in Holocaust and genocide education — to purchase 100 teddy bears to donate to children in need. Included with each bear is a handwritten note from a student telling the history of both of Bastacky’s life and her Teddy Bear project. 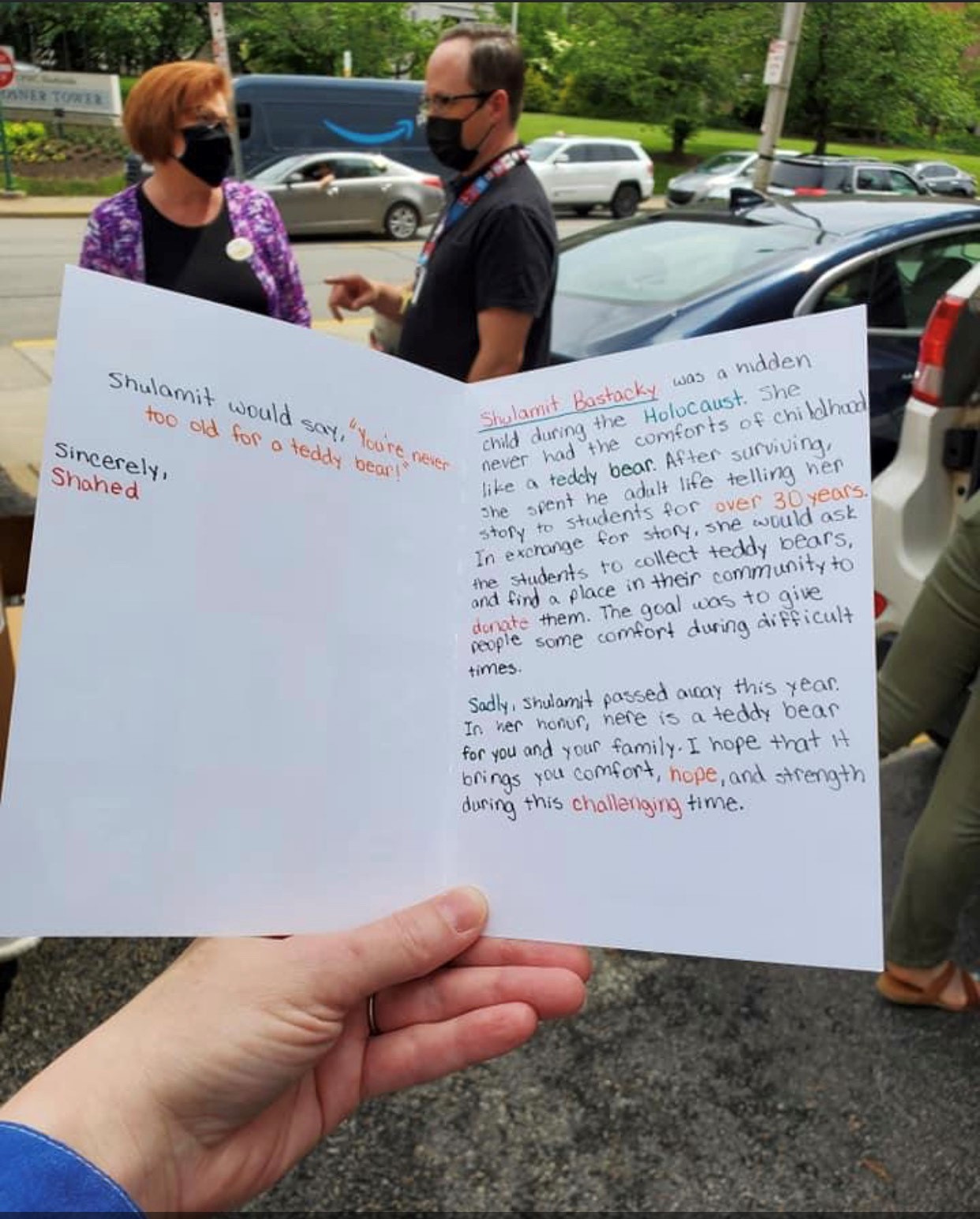 A copy of the note included with the donated Teddy Bears. Photo provided by Scott Vensel

The bears were donated to Family House, a nonprofit that hosts families who have come to Pittsburgh to seek medical treatment. Bastacky had visited Family House and interacted with children staying there, said Jennifer March, Family House executive director. March said she is grateful for the donations provided by Vensel and his students.

“The people who stay at Family House are people who are traveling from out of town due to a medical situation that requires them to leave their home, come to an unfamiliar city, and Family House’s mission is to provide comfort away from home,” March said. “There’s nothing better to add to somebody’s comfort than a teddy bear.”

There aren’t many Holocaust initiatives that put students in the driver’s seat, said Nick Haberman, the founder and director of the Light Education Initiative, who noted that Shulamit’s Teddy Bear Project is easily replicable by other schools and a nice way to continue Bastacky’s legacy.

The Light Education Initiative, funded by the Grable Foundation through the Holocaust Center of Pittsburgh and the Jewish Federation of Greater Pittsburgh, is currently working with 15 schools and is interested in expanding its reach, Haberman added.

While Vensel isn’t Jewish, he has come to embrace the Jewish concept of bashert, or destiny.

The middle school teacher had originally planned to be a pharmacist, but as part of a history course, he went to Germany and Poland for a month to study the Holocaust.

Vensel again felt the hand of fate when he was hired to teach language arts at Dorseyville Middle School and was told the class included a unit about the Holocaust. He was excited to do more than simply teach about Anne Frank’s “Diary of A Young Girl” or Elie Wiesel’s “Night.”

“To personalize that history by bringing in someone who experienced it firsthand is invaluable,” he said.

Unbeknownst to Vensel at the time he started working on the Teddy Bear Project was his own family’s history with Family House. His mother had stayed at the facility when she and Vensel’s father traveled from the family’s hometown of Bedford, Pennsylvania, so his father could seek cancer treatment in Pittsburgh.

There is more to this story that may be bashert: Bastacky decided to launch the Teddy Bear Project after speaking to another Dorseyville Middle School class, taught by Mimi Botkin, whom she happened to meet at a seminar. Several days after her talk, Botkin came to Bastacky’s house with a bag of teddy bears inspired by her talk.

Lauren Apter Bairnsfather, executive director of Pittsburgh’s Holocaust Center, accompanied Vensel and Haberman when they dropped off the teddy bears at Family House. 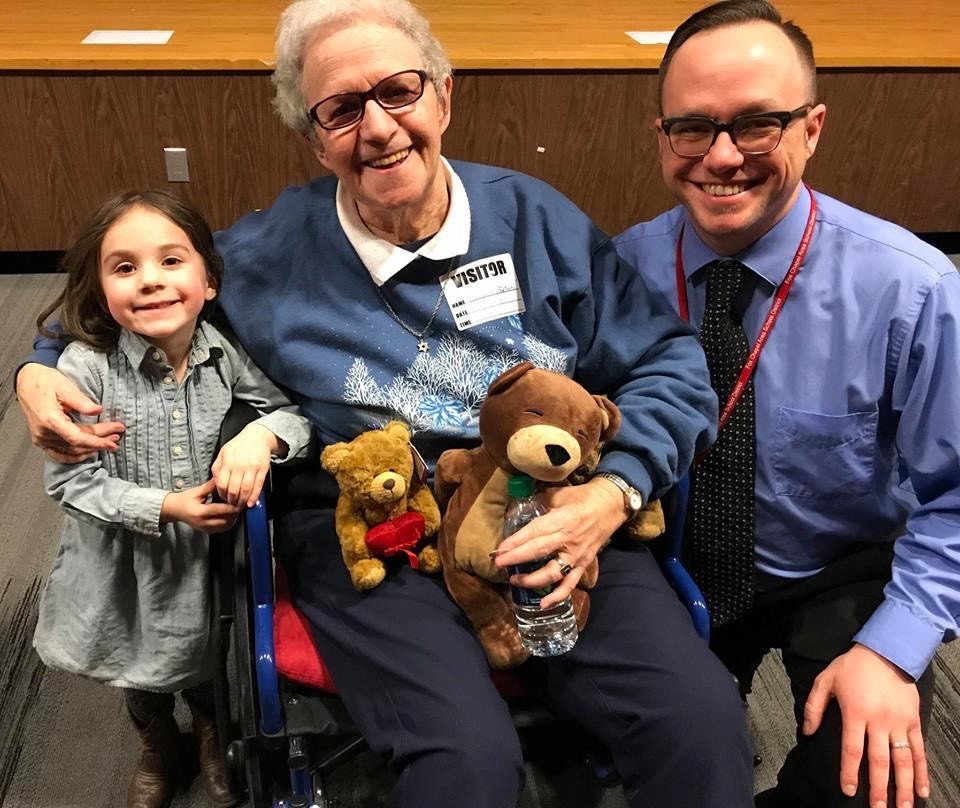 Scott Vensel’s daughter gave a teddy bear named Hope to Shulamit the last time the pair saw the Holocaust survivor. Photo provided by Scott Vensel
“We need these stories of hope,” Bairnsfather said. “We’re continuing to remember Shulamit and her mission by continuing to bring compassion and comfort to people who need it.” PJC