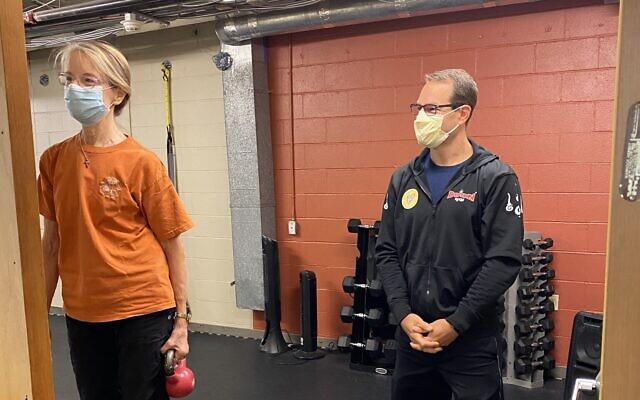 Community members have begun working out at the JCC once again, practicing social distancing, even with trainers. Photo courtesy of Jewish Community Center of Greater Pittsburgh.

Like Nahshon from the Midrash – who was the first to leap chin deep into the Red Sea – someone had to be the first to dip their toe into the water and prove the walls would not come crashing down by returning to services at a synagogue and jumping onto an exercise machine at the Jewish Community Center of Greater Pittsburgh.

Since Pennsylvania entered the green phase of Governor Tom Wolf’s COVID-19 reopening plan on Friday, June 5, Jewish businesses, institutions and synagogues slowly have begun to reopen their doors and welcome back community members, albeit with new guidelines and regulations.

When Congregation Poale Zedeck, an Orthodox shul in Squirrel Hill, reopened for Shabbat on June 12, member David Oshlag felt the time was right for him to begin attending services again.

“PZ was proactive very early on,” he offered. “They had a medical advisory board they put together and have been monitoring the situation.”

Oshlag described the protocols first put in place by the congregation, which required masks to be worn, as well as preregistration and name cards to designate seats for attendees. Those in attendance were asked if they felt comfortable sitting with family members. Oshlag said he sat next to his son and his wife sat near their daughter.

“The next closest person was six feet away, so it was very well spaced out and worked swimmingly,” he said.

Like many in the Pittsburgh Jewish community, Shabbat services are a weekly ritual for the Squirrel Hill resident and something he has longed to attend since the pandemic required PZ to close.

“It’s part of our lifestyle,” he said. “It’s something we’ve missed for these many months. We’ve been very respectful of what Rabbi Daniel Yolkut and the medical team has put out, but once they gave us the green light we jumped at the opportunity.”

Although Oshlag feels comfortable attending services or taking a quick jaunt to Home Depot as needed, he believes it is important to follow health and safety guidelines.

“Anyone that is 65 or older, or someone that may have a medical condition, is still being cautioned to check with their physician,” he noted.

Robert Davis is also a member of Poale Zedeck and is confident in his decision to attend services again.

“With the mitigation the synagogue has taken, along with being in the green phase, and having a relatively number of low cases in Allegheny County, the risk was so minimal that it felt like it was time to go back to synagogue,” Davis said.

The 45-year-old is not afraid of contacting the virus while davening, confident in the preparation the congregational leadership put in place before welcoming back members.

“I’m not fearful at all,” he said. “The synagogue has taken a thoughtful and cautious approach to reopening.”

Davis, a psychiatrist, believes his medical background gives him “a more reasonable approach. I’m taking a calculated risk but still maintaining a safe practice with what I’m doing.”

The Squirrel Hill resident is a member of the JCC but has not yet been back since it began to again welcome members on June 15, although he is anxious for the center to reopen its outdoor pool and is looking to swimming there again.

For Sandy Goldstein, it was both exercise and community that brought her back to the South Hills JCC.
“I missed using the elliptical,” said the Upper St. Clair resident. “I missed the old people that I commiserate with. It’s part of my social gathering and exercising is good for you. It’s a combination of feeling better and meeting people I used to see all the time.”

While acknowledging that there were not many people at the JCC at her most recent visit, Goldstein, a three-time-a-week attendee, expects to see more people when word gets out “about how clean it is and how well organized it is. I think they’ve done a fabulous job.”

“I’ve always washed my hands after I exercise, so I’m not afraid,” she said. “I think washing your hands and wearing a mask is key.”

Andrew Neft tested positive for COVID-19 in early March. With or without the virus antibodies though, he has been anxious to resume attending services and Sunday morning minyan at Chabad of the South Hills.

“I felt comfortable going throughout the pandemic,” Neft said. “Once it opened, there was a need for me to go.”

Neft believes that fear of the pandemic has been “overblown.”

For the South Hills resident, attending services at Chabad is just a warmup for plans to travel to Israel with his wife in the fall, flying through Canada. Both countries currently require tourists to remain in quarantine.

Neft remains optimistic that “we will get back to all the normal stuff, soon.”

“It was a matter of examining the risk-reward situation,” for Avi Cohen, who made the decision to begin attending Shabbat services at Chabad of Squirrel Hill.

Cohen feels comfortable at Chabad but has not yet been joined by his wife or three children.

“I have more of the obligation to be there and to be counted for a minyan,” he said.

Cohen has not started attending a daily minyan yet and is cautious about resuming other activities as well. As an example, he said that he attempted to vote by mail-in ballot for the primary but that “there was a mix-up and everything got delayed.” He decided not to vote in person.

“Every event has to be evaluated and I have to decide whether it’s worthwhile to be there,” he explained. “If I come down on the side that I should be there, the next question is how safe is it and have they done enough?”

As of press time, non-Orthodox congregations in Greater Pittsburgh had not yet reopened for services. Many continue to host online services via Zoom or other digital platforms.

For Davis, attending synagogue is part and parcel of Jewish life. He said he hopes the synagogues that haven’t yet reopened, “strongly consider doing so in the near future, in order to preserve their shul community and keep their place in people’s lives.” PJC