Rabbi Mordecai Leib Glatstein’s story — amazing in its scope — came to an end on March 28 when the larger-than-life religious figure who helped define seven decades in Jewish Pittsburgh, a Holocaust survivor who refused to refer to himself as a “survivor,” passed away.

Born into a rabbinic dynasty in Lipno, Poland, in 1916, Glatstein lost his father to the Spanish flu as a young child and was dubbed a Talmudic prodigy — “the Genius of Plotzk” — during his early Yeshiva studies. According to his family, he went on to watch Nazis destroy his beloved Warsaw, first by building Jewish ghettos, then by burning them to the ground.

Glatstein, who weathered several slave-labor camps, was liberated by the Americans and Russians from the infamous Dachau concentration camp in 1945, his son, Yossi Glatstein, told the Chronicle.

But there is so much more to the legendary stories of his life.

Once, as Glatstein and his brother were dragged into the Dachau crematorium, praying “Shema Yisrael” as they prepared for death, a Nazi guard hollered and pulled them out, insisting they were still healthy enough to work. Glatstein’s family later characterized the guard as the prophet Elijah in disguise.

“That guard, he didn’t save my father and brother — he saved me, he saved my children, he saved my grandchildren,” Yossi Glatstein said. “Do you want to know where God was during the Holocaust? He was saving my entire family from the crematorium.”

Yossi Glatstein also recalled his father’s story about being beaten unconscious by Nazi guards while davening. When he regained consciousness he picked up davening right in the spot where he left off.

“It was an act of defiance,” Yossi Glatstein said. “‘You Germans can’t touch me. We have our God.’”

In the immediate post-war years, Glatstein served as deputy director for the Joint Distribution Committee, providing religious and educational services for survivors, reuniting families separated by Hitler’s death camps, searching for Jewish orphans and serving as a translator for General Dwight D. Eisenhower. In Munich, he served as a chaplain for the U.S. Army and catalogued Jewish artifacts stolen by the Nazis. Glatstein and his wife, Cyna, later recorded testimonies about the scars the Holocaust left behind for filmmaker Steven Spielberg’s Shoah Foundation.

Glatstein arrived in Pittsburgh in 1949 and served as a spiritual leader for more than four decades at the Charles Morris Center of the Jewish Association on Aging, then known as the Jewish Home and Hospital for the Aged. He also served as the primary chaplain for the Commonwealth of Pennsylvania, visiting patients in various hospitals throughout the state.

Yossi Glatstein often accompanied his father on his visits, and later filled in for him at JAA when the elder Glatstein was ill. 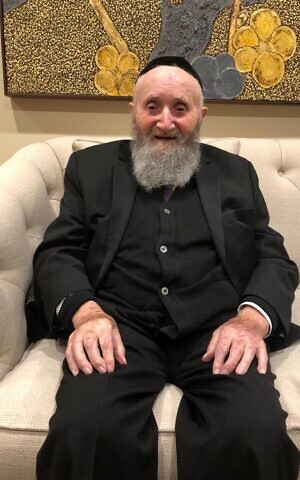 Rabbi Mordecai Leib Glatstein (Photo provided by Sara Glatstein)
“I remember the respect he had for every single person there,” he said. “What always struck me was this kind of quiet dignity he imparted.”

Yossi Glatstein said that was no accident. His father recognized that the first people to be murdered by Nazis upon their arrival to the death camps were the elderly and the mentally ill, and so he decided during the war to dedicate his life’s work to those peoples’ well-being and comfort.

“He established a very good relationship with a lot of the older people he served as chaplain, both as part of the JAA and in the state’s hospitals,” said Rabbi Shimon Silver of Young Israel, an Orthodox congregation in Squirrel Hill. “He was a very sweet man — that’s the best word for it. He spoke softly and deliberately and slowly. And he had class, an old-fashioned European class.”

The JAA mourned his passing this week.

“Rabbi and Rebbetzin Glatstein were beloved fixtures at Charles Morris for many, many years. They touched the lives and hearts of many of our seniors and brought them solace, comfort and hope,” said JAA President and CEO Deborah Winn-Horvitz. “Rabbi Glatstein’s very presence in our facility added a measure of reverence and sanctity. In so many ways, he set the tone for our future. May his memory be a blessing.”

A faculty member at the former Hebrew Institute of Pittsburgh, Glatstein’s resume was extensive, and he published scholarly works, often in Hebrew, Yiddish, English, German and Polish. He also worked from the pulpit, serving as rabbi of the Toras Chaim Congregation in the East End from 1951 to 1958. He served as president and head of Jewish Chaplains of Pennsylvania, and helped form and, for 30-plus years, guide the Vaad Harabanim of Pittsburgh.

Rabbi Moishe Mayir Vogel, who has been serving the Vaad Harabanim for nearly 20 years, recalls Glatstein and his wife delivering kugel to area seniors before Shabbat each week.

“His dedication to that population, his dedication throughout, was legendary,” Vogel told the Chronicle. “He meant so much to the Pittsburgh Jewish community. He was very nurturing and a very kindhearted, gentle soul. He brought a lot of warmth to a lot of people.”

Vogel remembered when Glatstein left Pittsburgh after the death of his wife in 2018. He spent his remaining years with Yossi Glatstein, one of his three children, in Brooklyn.

“You never heard an idle word from him,” Vogel said, simply adding, “This is a big loss to the community.”

During his time in Pittsburgh, Glatstein also embraced the mitzvah of “chesed shel emes,” officiating at funerals for those without families or without means to provide a proper Jewish burial, his son said.

Former Pittsburgh Mayor Sophie Masloff officially declared March 28, 1993, Rabbi Mordecai and Cyna Glatstein Day, in recognition of their contributions to enhancing the lives of their fellow citizens and the Jewish community.

Rabbi Levi Langer, dean of the Kollel Jewish Learning Center in Squirrel Hill, came to know Glatstein when he was well into his 90s: Glatstein took part in Langer’s Talmud class and rarely missed a session.

“Old age was no impediment to him,” Langer said. “He was in his 90s and it was impossible to get him down.”

Glatstein remembered hearing the wails of Jews as they died in the Nazi gas chambers at Dachau during the Holocaust, many of them screaming that nobody would survive to say the Kaddish for them.

“When he survived, he dedicated himself to praying Kaddish for those who had lost their lives,” Langer said. “He was really dedicated to that. He would pray standing for hours on Yom Kippur. He was indomitable. He always thought about how he was doing these things for those who left no one behind. He was a very inspiring figure.”

Glatstein was buried beside his wife on the Mount of Olives in Jerusalem on the fourth day of Pesach, surrounded by family and dozens of mourners.

Yossi Glatstein said he always knew his father was a very special man.

“I knew I had a great father because you observed it every single day in everything he did,” he said, fighting back tears. “My father was the light of my life.” PJC