A Squirrel Hill teen has become the first Pittsburgher to take part in Kol Koleinu, a national feminist fellowship.

Orelle Magnani, a senior at Taylor Allderdice High School, was named one of the 2021-2022 Kol Koleinu Teen Fellows.

Now in its fourth year, the Kol Koleinu fellowship is an initiative of the nonprofit Moving Traditions and is supported by the Reform movement’s youth program, NFTY, and the Conservative movement’s United Synagogue Youth. The fellowship allows 56 Jewish teens to explore and deepen their knowledge of feminism, channel their voices to share their beliefs and use skills to create tangible change in their communities.

Magnani, 17, got involved with Moving Traditions — whose mission is to support the emotional wellbeing of Jewish teens — when she was in the seventh grade, through its Rosh Hodesh girls program, then heard about the fellowship from family and friends who have participated.

“I think it’s a great opportunity to implement social change,” she said. 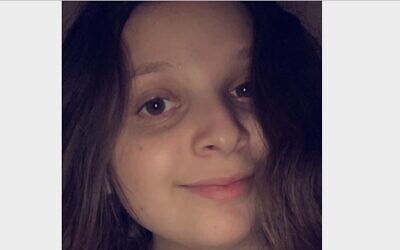 Open to Jewish 10th-through-12th graders of all genders throughout the U.S., the yearlong fellowship brings teens together — mostly virtually right now because of COVID-19 — to learn about feminism and social change, officials said.

The fellows then use what they learn to create projects to teach their peers and advance positive change in their communities. Past participants in Kol Koleinu — which means “all our voices” — have committed to projects on a broad range of major issues, including body image, voting rights, the need for gender equality within their schools and inclusive sex education.

Magnani’s project is still up in the air, though her application cited the massacre at the Tree of Life building as transformative for the teen, who attends Congregation Beth Shalom.

“Orelle really came alive in her application,” said Jennifer Anolik, the fellowship’s curriculum manager. “[The shooting] drew her to want to make a change.”

Subjects tackled in the fellows’ projects, Anolik said, “are really all across the spectrum,” but typically revolve around Jewish concepts of tzedek, or justice; shelemut, or wholeness; and chesed, or kindness.

“People are really excited to learn about feminism and how it connects to all parts of their life,” Anolik said.

Magnani, who is active with Amnesty International, told the Chronicle she is interested in how social and political issues on a global scale intertwine with feminism — particularly in terms of social justice and equity.

“Incoming Kol Koleinu fellows are ready to channel their energy toward meaningful social change, especially as they emerge from the pandemic,” said Moving Traditions Founder and CEO Deborah S. Meyer. “In their applications, the fellows told us that they want to fight antisemitism, sexism and racial injustice — and they want to work with their peers to advance feminism, reproductive rights and positive body image, among other issues.”

“They come up with a project and they’re placed with a mentor who can help guide and shape and resize the project they want to do,” said Moving Traditions’ vice president and chief of program strategy, Rabbi Tamara Cohen.
Cohen said she hasn’t seen the pandemic slow down the intensity of the program.

“Last year, especially, it was a hard year,” Cohen told the Chronicle. “And it was amazing and inspiring to see how many great ideas they had. Even just staying home, they made a difference.”

“And I learn from them,” she added, “because in many ways they are at the cutting edge of feminist change and Jewish innovation.”