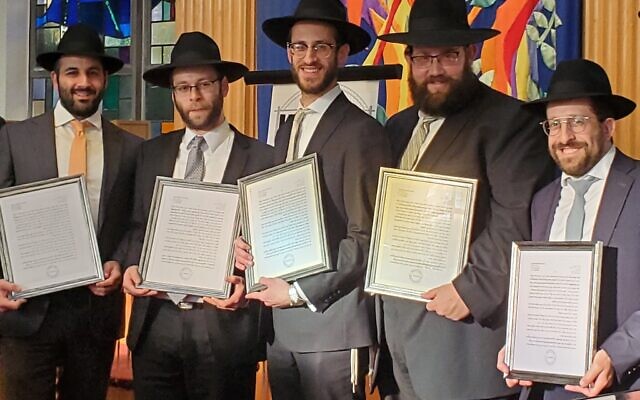 More than 200 members of Pittsburgh's Jewish community celebrated the ordination of five local scholars at the Chag HaSemicha program, a first for the Kollel Jewish Learning Center.

The May 8 program was an opportunity to highlight the accomplishments of Pittsburgh’s young Jewish scholars and thank the community for enabling their achievements, Associate Rosh Kollel Rabbi Doniel Schon said.

Carey Balaban, a professor of otolaryngology at the University of Pittsburgh School of Medicine and longtime supporter of the Kollel, described the event as a “convocation,” and praised the scholars on their ordinations.

Before receiving Yoreh Yoreh, Berkowitz, Bauman, Gans, Mandelbaum and Shapiro each held Rav U’Manhig ordination, a lower level of semicha. Receiving Yoreh Yoreh required them to study lengthy portions of the Shulchan Aruch (a 16th-century code of Jewish law) and travel to Baltimore for a series of three tests with Rabbi Moshe Heinemann, a nationally recognized Jewish legal authority who serves as head of Agudath Israel of Baltimore and rabbinical supervisor of the Star-K kashrut certification agency.

Berkowitz, Bauman, Gans, Mandelbaum and Shapiro completed their studies during the pandemic. The rabbis’ perseverance during such a devastating period is inspiring, Rosh Kollel Rabbi Levi Langer said.

These scholars “live and breathe the teachings of the Torah,” but the community also helped the scholars along, continued Langer: “Our semicha is your semicha as well.” 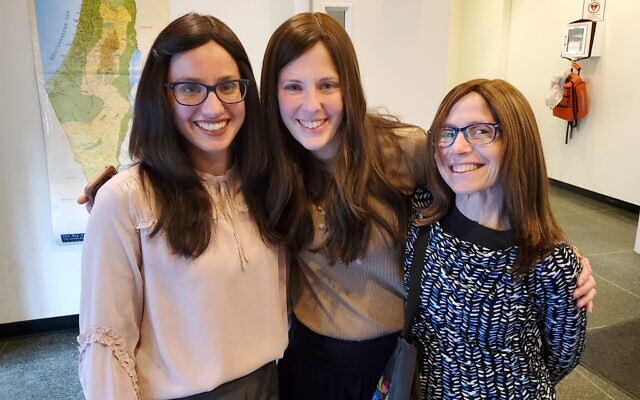 During a conversation at the dining room table of the late Donald and Chantze Butler nearly 45 years ago, it was decided that Pittsburgh should have a group of scholars whose responsibility was to learn Torah and aid the Jewish community’s spiritual development, Milch noted.

To see not only a program like this, but the number of young people now calling Pittsburgh home, is a “big zechus,” Faithe Milch said. 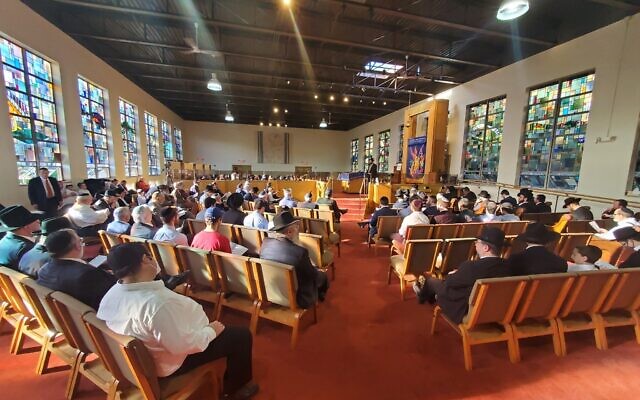 Community members listen to a series of speeches during the Chag HaSemicha. Photo by Adam Reinherz

Rabbi Sroy Levitansky of Beth Medrash Govoha, a yeshiva in Lakewood, New Jersey, with nearly 8,000 students, praised Pittsburgh’s former community leaders who saw early on that a kollel could transform Jewish life within a city.

The kollel movement didn’t start until the 1980s — until then, most cities around the country were solely focused on growing their synagogues and Jewish day schools — so for Pittsburgh to appreciate the importance of this type of organization “says something powerful about this community,” Levitansky said.

Past Kollel President Chuck Perlow said the “tremendous turnout” at the May 8 event testifies to the vision of past and present scholars and leaders.

“The heart and soul of a kollel is its scholars,” Perlow said. Each of the five scholars honored and their families originally came from other cities, saw something special about Pittsburgh and decided to make this Jewish community home, he added. By doing so, they “lifted us, and for that we are eternally grateful.”

Squirrel Hill resident Becca Knoll said she gladly attended the May 8 event, noting that between the organization’s classes and programming “the Kollel offers so much to strengthen Pittsburgh Jewry.”

Fellow Squirrel Hill resident Judah Beck agreed, saying he was “happy to share” in the joy of everyone’s accomplishments.

Receiving Yoreh Yoreh semicha in front of family, neighbors, study partners and friends “means the world to me,” Kollel scholar Rabbi Chananel Shapiro said. Jewish tradition teaches that the lineage of rabbinic ordination dates back to Moses at Mount Sinai, he added. It means “everything to me to be part of that connection.” PJC