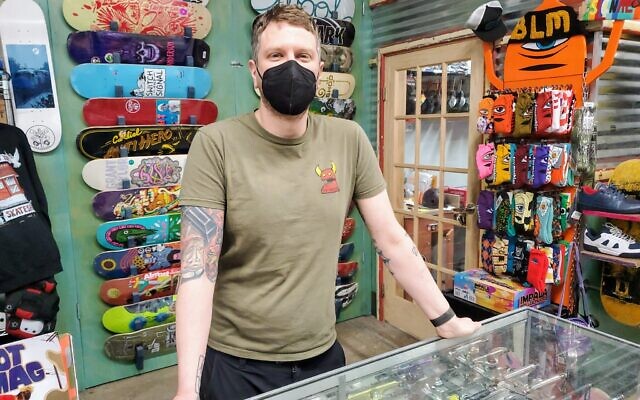 Kerry Weber stands behind the counter at Switch & Signal. Photo by Adam Reinherz

It’s Monday night in Swissvale, and Kerry Weber is squeezing a set of skateboard wheels. Weber, a former Washington County resident who now calls Point Breeze home, presses down on the plastic-wrapped packaging and explains how a rider’s experience depends on the wheels’ makeup and size.

Standing a few feet from Weber are a group of four helmeted adults. About a dozen skateboarders are elsewhere at Switch & Signal, an indoor skatepark in Swissvale. Some of them are on boards, attempting tricks, falling; others are mingling, laughing and making the most of a Monday night beginner session. The group, spread out among Switch & Signal’s curated stairs, ramps and fencing, is a faction of Weber’s target audience.

Skateboarding is an inclusive experience, Weber said. That’s why Switch & Signal, the skateboarding park Weber owns and operates, has designated sessions for adult beginners, as well as slots catering to women, transgender and gender nonconforming people of all ages.

The inclusivity, which Weber promotes, is reflected in everything from Switch & Signal’s programming to the music played inside the park and even Weber’s choice of lighting and paint colors. The ramps’ different paint shades help people visualize where they are while riding. The lighting is positioned for ample visibility, and the songs don’t blast from Switch & Signal’s speakers at a deafening pitch. Skateboarding isn’t always easy for first-timers or professionals, Weber explained, so it’s important that everyone can safely attempt a new — or familiar — activity.

Weber offers helmets, safety pads and skateboards at Switch & Signal. Adults are largely free to take whatever precautions they’d like, but children must be helmeted. At this point in his life, Weber, 41, said he’s taken enough falls to know the value of wearing a helmet. But skateboarding, much like life, he said, is an individualistic expression. 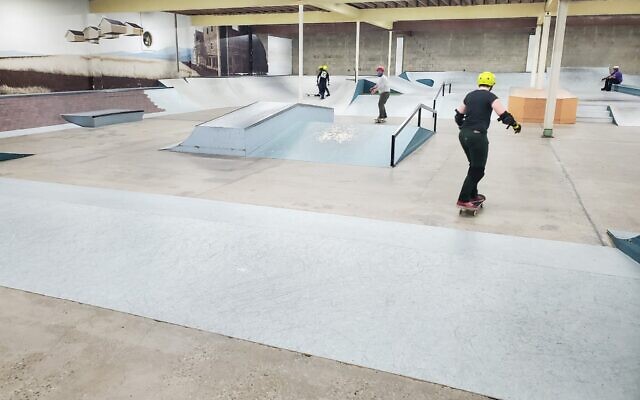 Skateboarding — according to Culturally Situated Design Tools, a project founded by University of Michigan researchers and supported by the National Science Foundation — largely emerged from the mid-20th century California surfing scene. Once the waves went “flat,” surfers needed a new activity so, using wooden boxes and wheels, surfers and other early riders eventually developed skateboards like those used today.

Throughout the 1970s and early ‘80s, skateboarding’s popularity fluctuated, but by the mid- to late-1980s, movies such as “Back to the Future,” “Thrashin’” and “Gleaming the Cube” helped cement the activity’s place within popular culture. Since then, the industry has grown to almost $2 billion in value, according to Grand View Research.

Skateboarding has “commodified,” Weber said, similar to the way society has reconsidered its relationship to street art or graffiti. What once blighted a city is being cherished, he added.

Although skateboarding has a “greater reach” than it did decades ago, Weber would like to see more inclusivity.

Programs like Switch & Signal’s Shred Your Fears, a skateboarding and yoga workshop for women, trans and/or non-binary people, should help, he said.

Weber attributes some of his ideas about inclusivity to his Jewish identity. As a child in South Strabane Township, in Washington County, Weber was the only local Jewish skateboarder. He recalled several antisemitic incidents from his adolescence but said the significance of those experiences became clearer as he aged.

There’s a space for everyone within skateboarding, Weber said. And when it comes to Switch & Signal, the park can grow if it remains a safe space for learning. 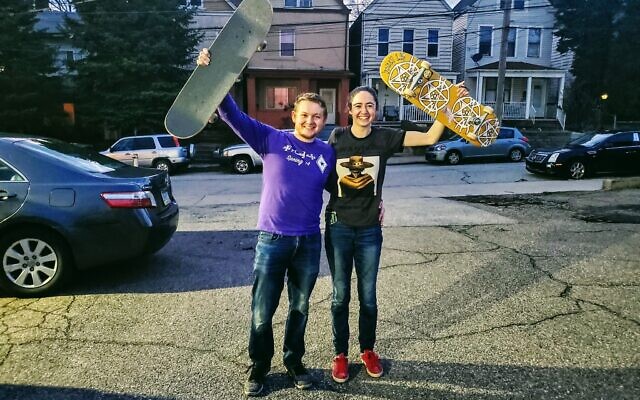 Forrest Stuckey and Jennifer Torrance stand outside Switch & Signal after an evening of skateboarding. Photo by Adam Reinherz

North Side neighbors and coworkers Rebecca Grabman and Carina Kooiman attended the Switch & Signal program and described the setting as “super-welcoming.”

“This place is amazing,” said Jennifer Torrance, a Brentwood resident. “Everyone cheers you on. It’s such a positive, encouraging place.”

“Kerry sees me. He knows who I am,” Torrance said.

“This is a friendly place to learn to skateboard, to roller skate, to inline skate. If you want to try something out, we’ll be here without judgment,” Weber said. “This is what we do.” PJC