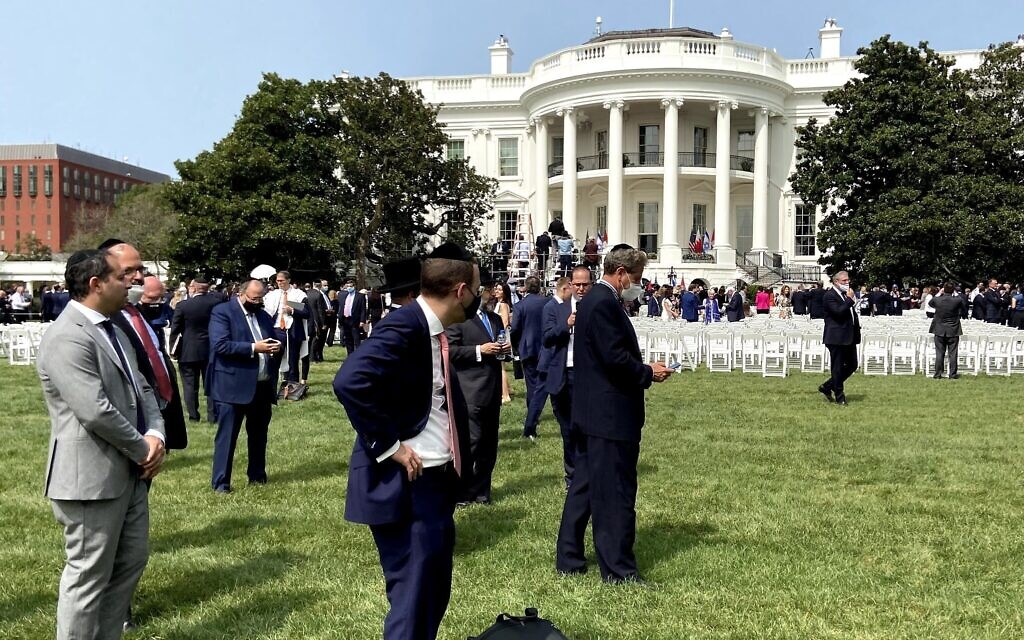 Kaddish on the South Lawn of the White House following the singing of the Abraham Accords. (Photo by Karen Lehmann Eisner)

Looking back on 2020, a lot comes to mind. What promised to be a strong year at its start, turned out to be one of the most devastating in a century.

Not since the Spanish Flu did so many innocent people lose their lives to disease. Nobody knows for sure how the COVID-19 virus began, but one thing we do know is that it traveled around the world, at record speed, almost as quickly as a thought on social media. Families were separated. Parents could not see their loved ones. People died alone.

The virus was the headline-grabber until the sad death of George Floyd in Minneapolis. Then we watched the demonstrations and riots. Suddenly, COVID-19 was no longer the only news item. We had a new source of death and sadness to mourn.

But through all this, there were positive things that surfaced as well. Simple things. Good things.

People forced to stay home, or quarantine, found creative ways to pass their days. Sharing jokes online, reading, organizing, finally getting to the projects they put off for years. Friends became more important and many new friendships blossomed. New business ideas grew. Some businesses pivoted and thrived. For some, there was hope.

Unfortunately, my husband’s father, Milton Eisner — a stalwart of Pittsburgh’s Jewish community — was dying in early June, in the midst of the Black Lives Matter protests and COVID-19. Despite the risks, our sons flew in from the West Coast and we all drove from Washington, D.C. to Pittsburgh to be at his bedside. Our need to have closure trumped the pandemic.

We were fortunate to have that special time together as a family, quarantining for several days and simultaneously saying good-bye to my father-in-law and my children’s grandfather. He died with all of us at his bedside. Not many people and their families had that good fortune.

With death, the Jewish faith requires one’s offspring to recite the Mourner’s Kaddish on a daily basis for 11 months. We all know of the challenges of gathering a minyan these days. But my husband has managed daily to keep the mitzvah of saying Kaddish throughout his period of mourning.

While all of this was going on — the coronavirus crisis, demonstrations and riots, and personal losses — quietly and clandestinely, power brokers were working in the Middle East to create an historic peace between the UAE, Bahrain and Israel, marshaled by President Donald J. Trump. 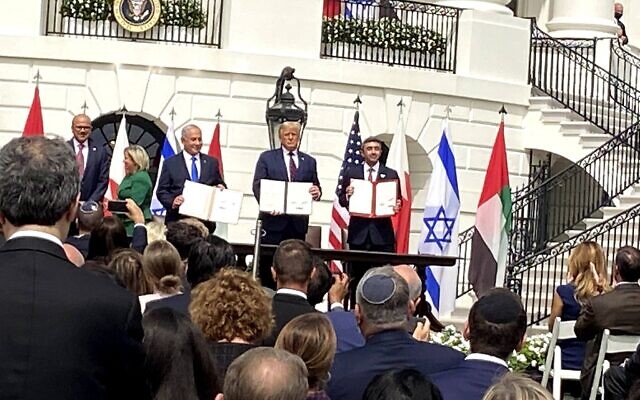 The signing of the Abraham Accords (Photo by Karen Lehmann Eisner)

We were fortunate to be invited to the historic signing of the Abraham Accords, where we witnessed a true miracle on the South Lawn of the White House.

When it was over, I realized it was time for mincha, and I organized a group of men so my husband could recite the Mourner’s Kaddish.

I stood back and watched the scene. Only moments before, the world had seen a miracle of the signing of the peace accords. Yet, as I watched the men daven (pray) on the very same lawn the agreement was signed, with the White House just yards away, I realized this was the true kiddush Hashem and another historic moment.

This scene of both the signing of the Abraham Accords just moments before, followed by a minyan on the White House grounds, cemented not only a future for the State of Israel and the Jewish people, but concretized a spiritual moment that has endured centuries of Jewish life. Being an amateur photographer, I quickly took out my phone and started filming and photographing this momentous moment.

This photo that went viral was my small addition to history.

We live in special times. I am glad to have been a small part of it. PJC

Karen Lehmann Eisner is an event planner and resides in both Washington D.C. and New York City.