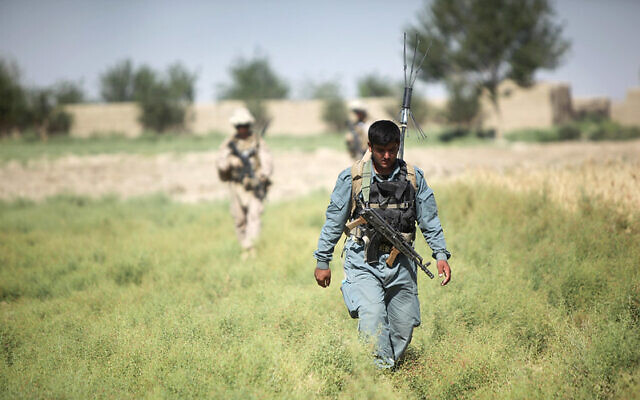 Despite spending years training Afghan security forces, the U.S. trained forces turned over Kabul and other cities to the Taliban when the U.S. pulled out of the country. (U.S. Marine Corps photo by Cpl. Kenneth Jasik)

During the United States’ nearly two decades in Afghanistan, tens of thousands of Afghan nationals gave assistance to the American military and American companies that offered support to their country. Now that America is withdrawing its troops and the Taliban is in control of the government, those nationals — whose occupations ranged from translators to truck drivers to cafeteria workers — fear for their lives, as well as the safety of their families.

The Biden administration is working to help Afghans in danger of Taliban reprisal flee the country. Those eligible for U.S. aid include people who qualify for the Special Immigration Visa program — created by Congress to assist people in Afghanistan and Iraq targeted for retribution because of their work with the U.S. — as well those who have been given a new, Priority 2 (P-2) refugee status.

According to Allie Reefer, a spokesperson for Jewish Family and Community Services, the SIV status is available to Afghans who worked for the U.S. government or military for at least one year. Those who worked for other U.S. organizations or companies may qualify for the new P2 status.

Afghans who are allowed to leave Afghanistan for the U.S. will be flown to Virginia, where their paperwork is processed, before the refugees are relocated to a final destination.

Pittsburgh is one of the cities identified to receive some of the approximately 53,000 Afghan nationals who will arrive in the States as part of the SIV program. Those refugees will be assisted by JFCS, a local affiliate of HIAS (originally the Hebrew Immigrant Aid Society), a national resettlement agency working with the U.S. government.

“Evacuation is critical, as political stability put these American heroes and their families in grave danger,” said JFCS President and CEO Jordan Golin at an Aug. 17 press conference.

So far, JFCS has been notified that it will be assigned two families, said Ivonne Smith-Tapia, JFCS’ director of refugee and immigration services. One family is already in the city, having arrived on a travel visa rather than as part of the SIV program. But Smith-Tapia expects JFCS will be assigned additional families as well.

“We’re planning as if we’re going to receive more than a handful of families,” she said. “We won’t see hundreds of people arriving at the same time, but this is going to be a slow process of refugees arriving for a long time, especially because the government is expanding its criteria of who can apply for resettlement.”

The Afghans relocated to Pittsburgh will receive the same services and support JFCS offers to other refugees, including help with critical needs like housing, clothing and basic essentials, Smith-Tapia said.

To meet those needs, JFCS is working with several other organizations, including the Greater Pittsburgh Christian Association of Southwestern Pennsylvania, The Global Switchboard, Ansar of Pittsburgh, United Way, the Salvation Army and Casa San Jose.

The refugees will also receive long-term assistance, Smith-Tapia said, such as referrals to appropriate agencies so they can be enrolled in benefits programs, and help navigating doctor appointments. They will also be provided with information about COVID-19 vaccines, and offered help enrolling children in school.

Golin said that refugees receive enough financial support from the U.S. government to cover them for three or four months. JFCS helps them to find jobs during this period so that they are financially stable once the government’s resettlement funding is up. They also have other resources available to help beyond the initial three months. The refugees, however, know that the aid will eventually end.

“From day one when they arrive,” he said, “they are very much aware that the clock is ticking.”

The process of being approved to enter the United States as part of the SIV program is complicated, and includes completing medical checkups and getting required vaccinations, said Noorulhaq Fazly, a refugee employment specialist with JFCS. In 2016, Fazly was admitted into the U.S. from Afghanistan through the program, along with his wife and two children. In Afghanistan, he worked for the U.S. Department of State’s embassy in Kabul. Even so, it took two years and eight steps — each requiring documentation and verification — for Fazly and his family to be allowed into the U.S.

Unlike the new incoming refugees, Fazly was able to choose the city where he wanted to be relocated to when he came to the U.S. Originally he intended to move to Orange County in Southern California. But he changed his mind and decided to make Pittsburgh his home after watching a presentation about the city that was provided to SIV refugees.

Though the process to enter the United States under the SIV program has been expedited, Fazly said it most likely will still take at least six months, and the refugees will have to fulfill the same requirements as before.

Jennifer Brick Murtazashvili, the director of the University of Pittsburgh Center for Governance and Markets at the Graduate School for Public and International Affairs, is working with a group of Pitt graduate students to help former U.S. workers leave Afghanistan. The former advisor to the Department of Defense and the United Nations said she’s received over 1000 requests for help from Afghans attempting to leave the country as part of the SIV program.

The first step in the process is getting a letter from their former employer, which, for many, can be difficult.

“People were saying, ‘Can you help me? I worked for this place 12 years ago and can’t find this organization,’” said Murtazashvili, a member of Congregation Beth Shalom. “These organizations go out of business, they go bankrupt, merge — a lot of legitimate nonprofits merge with other nonprofits in the development world all the time.”

As a result, she said, some organizations that had a large presence a decade ago no longer exist.

Murtazashvili’s students and other volunteers are working to track down former employers for Afghans trying to leave the country. She hopes to continue the work as long as it is needed, but many of her students, volunteering during summer break, will have to return to classes soon. She’d like to hire a full-time staff person to help continue the work, but needs funding. The university has been supportive of her work, she said, and is trying to find donors to fund the program.

“We don’t want to over-promise and under-deliver,” she said. “This has to be handled professionally.” PJC

David Rullo can be contacted at drullo@pittsburghjewishchronicle.org.