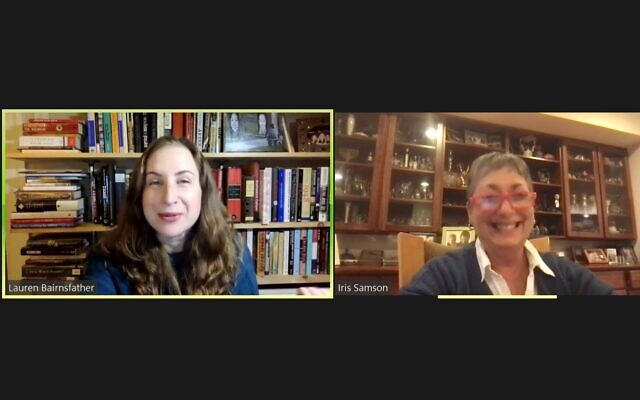 The night the glass was broken in November 1938, Nazis and their conspirators torched, smashed and plundered 7,500 Jewish-owned businesses in Germany, Austria and Czechoslovakia.

The night the glass was broken in November 1938, Nazis and their conspirators slayed 91 Jews, and 30,000 Jewish men were arrested — most taken to concentration camps, the fates of others unknown.

And the night the glass was broken in November 1938 — Kristallnacht, which we commemorate this week — a 17-year-old boy from Forst (Lausitz), Germany, named Jakob Weinblum took an action that was both spiritual and practical, running into a burning shul to save a Torah.

The story of “Jakob’s Torah,” which traveled with the ex-patriot Weinblum family to China before making its way to Pittsburgh decades later, was at the center of a conversation hosted virtually Nov. 9 by the Holocaust Center of Pittsburgh.

Marilyn Weinblum, Jakob’s daughter-in-law, said his act of heroism was a simple choice.

“They were burning all the synagogues and the stores,” she said during the Nov. 9 online session. “He just ran out and went into the synagogue and grabbed the Torah.”

That Torah served a makeshift congregation in Shanghai for the better part of a decade, while the Weinblums and an estimated 18,000 European Jews rode out the war there. Later, the Torah traveled to the United States in an unassuming duffel bag.

“Here he was, a poor refugee [and the Torah] stayed in his closet in New York for 26 years,” Weinblum recalled.

Weinblum said New York synagogues would not take the German Torah into their collections because it no longer was considered kosher and its letters were smudged.

The Torah later found a home at Tree of Life-S’fard in White Oak and, after that synagogue closed, at the Jewish Community Center of Greater Pittsburgh and in the Holocaust Center’s collection.

“I talked about it all the time,” Weinblum said. “I was so proud that it was there.”

“What a commitment he made to ensuring that was preserved,” Holocaust Center Director Lauren Bairnsfather told Weinblum. “What an incredible story coming out of Kristallnacht.”

The Nov. 9 presentation also featured a screening of the WQED documentary “An Unlikely Refuge” —which examines Pittsburgh connections to the story of Jewish refugees fleeing to Shanghai during the Holocaust — and a discussion with the producer of the documentary, Iris Samson.

Samson, a multiple Emmy winner, Golden Quill honoree and now a producer for WQED, said her decision to work in the Jewish world was simple. She married a Jewish man who descended from three Holocaust survivors, and found herself inspired by the history. A trip to Israel cemented that decision.

Her first job in Pittsburgh was as an assistant editor at the Pittsburgh Jewish Chronicle, which she called “a natural entry into doing stories on the Jewish world.”

Samson’s husband had three uncles who rode out World War II in Shanghai. “It’s a Jewish world and everything is sort of connected,” Samson said.

The documentary, she said, “was very different than the other Holocaust stories I’ve done in the past — it’s really a fascinating story.”

Samson interviewed several Pittsburghers for the documentary, including the Murrysville-based granddaughter of a Chinese diplomat who bravely handed out visas so Jews could safely flee Europe’s antisemitism. That diplomat, according to his family, said he was only doing what any other person would have done.

“The fact that there was a place that was a haven” meant a lot, Samson said. “There wasn’t a lot of antisemitism in China — and that was a good thing.”

Samson said time has been the greatest enemy of her work as a producer of stories related to the Holocaust.
“Our biggest and saddest problem was trying to get the survivors themselves,” Samson told Bairnsfather. “Once they’re gone, so many of their stories will be lost.”

“These are the stories that keep the memory alive,” Bairnsfather added.

The Holocaust Center of Pittsburgh plans to display “Jakob’s Torah,” as well as artifacts from Jewish life in China during World War II, at Chatham University sometime in 2022, Bairnsfather said. PJC