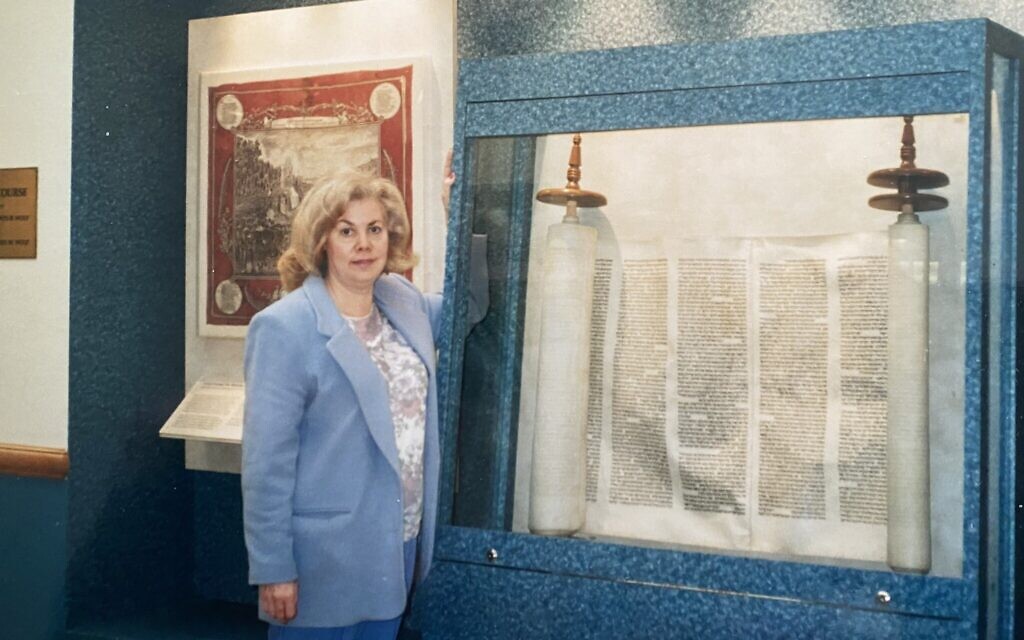 Marilyn Weinblum stands next to the case displaying Jakob's Torah at the Jewish Community Center of Greater Pittsburgh in 2001. (Photo provided by Marilyn Weinblum)

It was the evening of Nov. 9, 1938, and throughout Nazi-controlled Germany, government-sanctioned violence was leading to destroyed synagogues, social unrest and the arrest of thousands of Jewish citizens. That night would become known as Kristallnacht, or the Night of Broken Glass.

Jakob Weinblum, a Jewish teenager born in Forst (Lausitz), Germany, risked his life that night to flee to his shul, where he managed to save its cherished Torah scroll before the building was burned. In 1939, the Torah accompanied him and his family to the only country taking Jews without passports — China. After eight years in a makeshift Shanghai synagogue, the Torah traveled, along with Jakob, to the U.S. and eventually found a home at Tree of Life-Sfard in White Oak.

“It means everything to me,” said Weinblum, a retired teacher. “I have been telling everyone I meet about my Shanghai Torah.”

International Holocaust Remembrance Day, Jan. 27, marks the anniversary of the liberation of Auschwitz-Birkenau by Soviet troops in 1945 and honors the lives of those murdered during the Nazi regime. Although much Judaica was lost or destroyed by Nazis, many Torahs survived thanks to the heroic efforts of people like Jakob Weinblum.

In 1942, German officials instructed the Jews of Bohemia and Moravia to send more than 200,000 items of Judaica to the Jewish Museum in Prague for safe keeping. Some have hinted, without evidence, that the Nazis wanted to create a museum of an exterminated people.

Jeffrey Ohrenstein, chairman of the Memorial Scrolls Trust in London, believes the officials were more well-intentioned, as they asked the Bohemian and Moravian Jews for remnants of every aspect of Jewish life — down to the fingernail clippings of those who prepared the dead for Jewish burial.

“What is important,” Ohrenstein told the Chronicle, “is that they survived the Shoah.”

The Communists staged a coup in the Czech region after the war, leading to further stifling of Jewish life. But in 1964, after a failed bid to sell the Judaica to the Israeli government, 1,564 Holocaust Torah scrolls were brought to London and the Westminster Synagogue. Shortly thereafter, the Scrolls Trust was born.

“It was decided, rather than keeping them as a memorial, that they should be allocated to communities around the world,” Ohrenstein said.

More than 1,000 of the scrolls are on loan today, with 66 of them in Pennsylvania and the four aforementioned scrolls in Pittsburgh, according to Ohrenstein.

“We’ve allocated them all over the world,” he said. “The majority go to America because that’s where the majority of Jews went after the war …. Wherever there are Jews in America, you’ll find our scrolls.”

The year 1991 brought an interesting task for Sam Balk.

The longtime Mt. Lebanon resident and past president of Beth El Congregation of the South Hills was visiting family in England when he took a detour to Westminster Synagogue. His mission, per his rabbi, was to bring back the most damaged Torah scroll he could find.

Balk clearly recalls walking into a room on the synagogue’s third floor, where Torah after Torah — seemingly nondescript but each a survivor of the Holocaust — lined shelves.

“It was awesome,” said Balk, who now lives in Carnegie and whose daughter, Susan Seletz, is Beth El’s current president. “All we saw were the handles, laying horizontally on these shelves, one after the other. We didn’t know which one was which. But we asked for one that was not repairable and that’s what we got.” 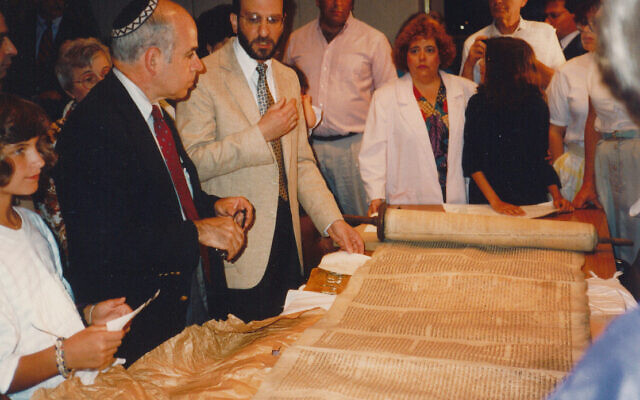 Sam Balk, Rabbi Ken Stern and congregants of Beth Congregation of the South Hills, in the early 1990s with the Holocaust Torah housed now within the synagogue (Photo provided by Sam Balk)
On loan at Beth El is what the U.K. synagogue, and by extension Ohrenstein’s Memorial Scrolls Trust, called “Memorial Scroll Torah #658.” Originally created in Vlašim, Bohemia, the Torah was stolen from that town by Nazis during World War II. At the end of the war, it ended up in the Prague State Museum — severely damaged by water, it could not be used for ritual purposes, only commemoration.

Memorial Scroll Torah #1294 has a similar story. Written more than 150 years ago, it was used in Neveklov, a small Bohemian town near Prague. It also was rendered homeless, taken from its home synagogue by the Nazis; after many years, it found its way to London and the Memorial Scrolls Trust loaned it to Tree of Life in Squirrel Hill in 1998.

“It is a sacred trust that we possess and display this Torah as a stark reminder to all that God’s teachings continue unabated,” Rabbi Hazzan Jeffrey Myers of Tree of Life told the Chronicle. “Many might pull larger meanings from any events post-Holocaust, but I think that the opening sentence says it all.”

Rachel Kranson is an associate professor of religious studies at the University of Pittsburgh, and book review editor at Journal of Jewish Identities. In 2017, she launched a project to document the “lives of scrolls” with special meanings in the Pittsburgh area with her “Jews and Judaism: Modern” students.

“Students in the course traced the known histories of 10 Torah scrolls,” Kranson said. “Whether we could trace the journeys of these scrolls across oceans or just across a few streets in Squirrel Hill, these scrolls helped us think through crucial aspects of Jewish history.”

The Holocaust Torah scrolls fall into a subfield of religious studies called “material religion,” said Kranson, which “is the study of how objects, images, architecture and art take on sacred meaning and create sacred experiences.

“Holocaust Torahs are a rich lens through which to understand the workings of material religion,” she said. “Torah scrolls that survived the Holocaust are treasured by many Jews for two reasons. First, because Torah scrolls are ritual objects that play a crucial role in Jewish worship. And secondly, because these objects survived the destruction of the communities that originally created them. For many Jews, valuing and revering these sacred scrolls — even if they are no longer fit for ritual use — is a way of keeping the memory of their creators alive.

“The fact that Pittsburgh’s Jews revere these scrolls, and use them to remember and honor those who perished in the Holocaust, still tells us something important about how the Pittsburgh Jewish community engages with memory of the Holocaust,” she said.

“These scrolls have come to represent Jewish persistence,” added Eric Lidji of the Sen. John Heinz History Center’s Rauh Jewish Archives. “They are a reminder of what was lost and also a reminder of what could not be destroyed as the center of global Jewry shifted from Europe to America. Beautiful and heartbreaking as pieces on display, I sometimes wish they were repaired and returned to use, to extend the symbol of survival into one of ongoing life.” PJC