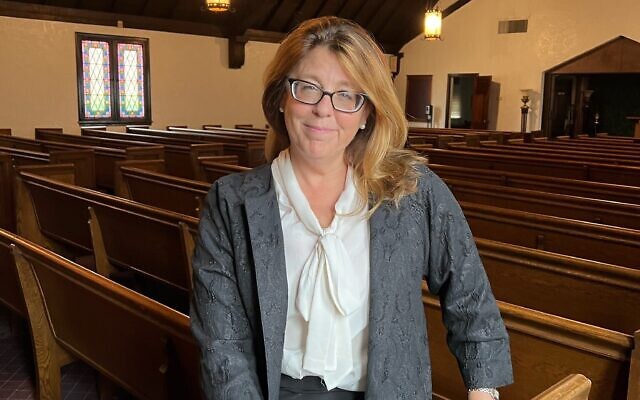 Sharon Ryave Brody is passionate about three things: family, the Pittsburgh Jewish community and educating the next generation of leaders.

Ryave Brody is the owner and president of Ralph Schugar Chapel in Pittsburgh’s East End. For nearly 50 years, the Jewish funeral home has shepherded families through some of their most personal experiences.

The family business has thrived, Ryave Brody said, because of the example set by her father, Arnold Ryave.

“I was only 18 when my father died,” she said. “I met so many people at his funeral and heard over and over, ‘Your father did so much for me; I would do anything for you because of how your dad helped me.’ I didn’t even know these people. One after another told me my father was a mensch. That’s my motivation. I think about my dad and what he did for people, quietly and under the radar.”

Ryave Brody said her father joined her grandfather, Jacob Ryave, at Blank Brothers Funeral Home after serving in World War II. While they were working at the Craft Avenue business, Ralph Schugar, who operated the Ralph Schugar Chapel, died, and Arnold Ryave was offered the opportunity to buy the funeral home from Schugar’s widow.

“I remember my parents sat me and my brother down when I was a little girl and told us, ‘We have this opportunity. We’re going to do this and it’s going to be hard, and you might not have everything you want but we’re going to try and make it work,’” Ryave Brody recalled. “I remember the conversation because it felt bigger than I understood.”

Arnold Ryave did, in fact, make it work.

He died in 1985, the same day his son, David, who was studying at mortuary school, took his boards and received his license. He was just 21.

It was David Ryave who turned Schugar’s into a “family business,” Ryave Brody said. After observing shiva for his father, David Ryave began running the funeral home.

“It was about a week into it,” Ryave Brody said. “He called my mother, Gail, and said, ‘I need you to come answer the phones.’ My mother came to work and never left. She died at 73, but even the day we found out she was sick, she was here at work.”
It wasn’t long before David called his sister, asking for her help as well.

“I was working in an office as a receptionist, and I got a call from my brother,” Ryave Brody recalled. “He said he needed me at the funeral home, so I quit my job and came here. That’s what a family business is — that’s what was asked of me and who doesn’t show up for their family?”

Ryave Brody, who studied at the Institute of Mortuary Science, serving as president of her class, became the first Jewish woman to become a licensed funeral home director in Pittsburgh. She took over the business when her brother died in 2015.
“I came into this business as the third generation of Ryave funeral directors,” she said. “My family’s history and service to our community was already established.”

And while she said she always had a head for business, her relationships in the community were enhanced by working alongside her mother and brother.

It was through those informal interactions that she learned the most important lesson in her business: All that matters is that people can rely on and believe in those with whom they are entrusting their loved ones.

Ralph Schugar is the only Jewish family-owned funeral home in the city, Ryave Brody said, adding that her family’s values are never far from its business practices.

For example, if needed, Ralph Schugar provides a funeral and casket free of charge for qualified families, with the Jewish Cemetery and Burial Association providing the grave.

“That being said, not everyone qualifies, and that’s where I pick up the slack,” she said. “I was taught to never turn anyone away. We’re here to help people. Death is one of our basic necessities. We don’t ask to be born, and we don’t ask to die, but it happens, and we have to take care of our dead. Everyone deserves a proper burial, and we happen to be experts in a proper Jewish burial.”

The fourth generation of the family has joined Ralph Schugar Chapel. Ryave Brody has two sons working there now and will be attending mortuary school in the fall.

She also believes in supporting women in the business. Of the dozen employees working at Ralph Schugar, only three are male, she said.

The funeral home provides practicum, or unpaid internships, for mortuary school students — which are required to obtain licenses to work in the field. The practicum pass along lessons to the next generation of morticians, Ryave Brody said. But, she added, the relationship goes both ways.

“I’ve gone from being one of the youngest people at Schugar’s to one of the oldest,” she said. “The next generation has a lot to teach me — technology and the way they see the world. I’m learning so much. We need their energy.”

Ryave Brody’s support for the Jewish community doesn’t end at the door to her business, she said.

For Ryave Brody, Ralph Schugar Chapel has afforded a generational bridge for her family while providing an essential service to the Pittsburgh Jewish community.

“The biggest blessing is that I get to work with my family,” she said. “ I had all those years working with my mother and brother. Now, I get to see my two sons every day, working and serving the Jewish community together. That’s been very special.” PJC