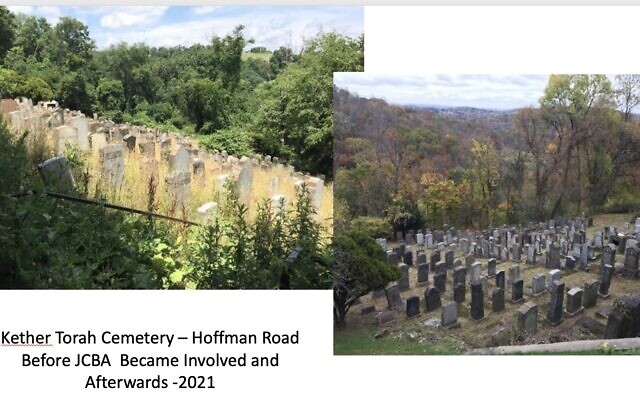 The Jewish Cemetery and Burial Association of Greater Pittsburgh has had a terrific run over the past few years.

Formed in 1992 out of the merger of the United Jewish Federation Cemetery Association and the Hebrew Burial Association of Pittsburgh, the JCBA found its legs after the Jewish Federation of Greater Pittsburgh decided in 2015 to tackle the issue of helping to preserve Jewish cemeteries in the area — especially when those cemeteries’ families and congregations had faded into the past.

“The planning was extensive,” said Shelly Parver, assistant planning director for the Federation and a key player in the transition work with the JCBA. “There also was a pretty steep learning curve, given the scope of the issue.”

With “dozens and dozens” of smaller Jewish cemeteries throughout the region, the JCBA and the Federation had a big task ahead of them, Parver said. By 2017, they had a plan in place and, in 2019, lined up most of the funding. Since then, the JCBA has grown from running 11 cemeteries to administering or helping to administer about 30.

“Our charge was really to think of the whole future, the long-term health of these cemeteries,” Parver added. “This is an example of Federation’s planning work at its best. We came up with the plan, and we made it happen. The success of the JCBA in recent years is immense, far better than I would have expected.”

Barry Rudel, the JCBA’s executive director, has become a passionate advocate for Jewish cemeteries, some of which have fallen on hard times.
“The community’s mission to re-envision the JCBA into a thriving, stable, strong burial association, after two years, is working,” Rudel said. “Most importantly, the long-deferred maintenance at many of the cemeteries has been and will continue to be addressed.”

Rudel stressed the Federation’s “significant early funding” was put to great use.

JCBA’s latest achievement? Its board recently approved funds for restoration work and sustained maintenance at the circa-1873 cemetery for Tree of Life Congregation in Sharpsburg, Rudel said.

In 2021, the four Jewish cemeteries in Johnstown— Ahavath Achim, Rodef Sholom, Beth Zion and Israel Isaiah — were turned over to the JCBA. They were joined in 2022 by Kether Torah cemetery in Reserve Township.

The JCBA’s website unfolds stories of each cemetery, including photos of repaired gates and trimmed trees. Rudel, though modest, is proud of the work his group has been doing.

“We’re here for the community,” he said. “And we’re grateful for the way they’re treating these cemeteries.”

Louis Kushner also was involved in the Federation’s work with JCBA — he is thrilled with the outcome.

“It’s gone better than anyone, I think, could have imagined,” Kushner told the Chronicle. “We’ve had the full support of the Federation and its staff. We hired an excellent executive director. It’s going remarkably well.” PJC