Almost three dozen volunteers participated in a community-wide day of service at Beth Abraham Cemetery last year to commemorate the victims of the Pittsburgh synagogue shooting. (Photo courtesy of JCBA)

Pittsburgher Steve Santman, like his father and grandfather before him, toiled as a volunteer to tend the Machsikei Hadas cemetery in Reserve Township.

The Orthodox shul connected to the cemetery, once based in the Hill District, closed back in 1989. Santman remembers going there as a teenager. But someone needed to help keep alive the memories of those that had passed; the hilltop cemetery near Millvale, which Santman managed between day jobs, contains between 600 and 700 grave sites.

“There were contributions for perpetual care – and different funerals helped fund it,” Santman said. “Some families gave nice contributions.”

Santman has dozens of relatives buried there. A decade ago, though, it just became too much.

“It was hard to let go but I was doing it alone,” Santman said. “I needed the backup and support – doing it myself was starting to become a challenge.”

In early 2011, management of the Machsikei Hadas cemetery turned over to the Jewish Cemetery and Burial Association, on whose board Santman now sits.

Santman’s was not the first cemetery the JCBA took on and, thanks to a revamping of the association, it is likely to be one of an ever-increasing number.

The JCBA last week announced a major reorganization to expand its capacity to meet a growing demand for cemetery management in Western Pennsylvania’s Jewish communities. Its leaders say the new structure will enable the JCBA to become “the community’s cemetery management entity of choice,” serving both cemeteries that are financially stable and those at increasing risk of abandonment. The JCBA estimates there are 75 Jewish cemeteries in Western Pennsylvania, about 15 of which the organization currently manages.

“With the region’s industrial might, it developed a landscape that’s full of cemeteries large and small and they’re all important,” Barry Rudel, JCBA’s executive director, told the Chronicle. “They all represent histories and communities and synagogues that still mean a lot to the people connected to them.” 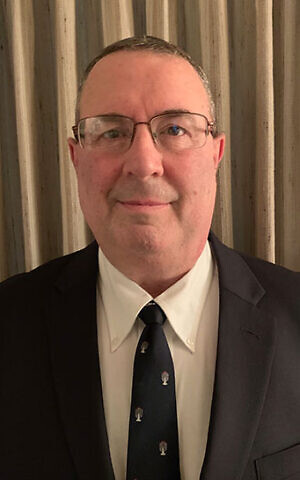 Though the JCBA dates back to 1992, the revitalized push to care for Jewish cemeteries is backed by the manpower – and the funds – of the Jewish Federation of Greater Pittsburgh.
The Federation’s Jewish Community Foundation granted the JCBA $450,000 – one of the largest grants in the Foundation’s history – to support JCBA’s expansion, including hiring Rudel as its first full-time executive director.

“We are taught that the very first thing a new Jewish community establishes is a cemetery,” Jewish Federation President and CEO Jeffrey Finkelstein said. “Now, as a well-established Jewish community in Pittsburgh, it is our responsibility to ensure that these cemeteries are maintained in perpetuity. We will best able to do so through this expanded JCBA and look forward to working with them in partnership to honor our mothers and fathers.”

JCBA is not taking its time getting moving. It recently acquired the Anshe Lubovitz cemetery in Shaler Township, and joins the Federation in its involvement with New Castle cemeteries. JCBA’s board also recently approved pursuing management of two small abandoned cemeteries: one on Rippel Road in White Oak and one in Port Vue.

“Now is the time for us to assist the many communities and congregations in the region that have either closed or see the need to transition their cemetery management and operations to another entity,” said Gregory Engel, the president of the JCBA. “We are professional, compassionate and understanding in our approach, with a goal to meet the needs of the region’s Jewish community.”

Parver laughs when she estimates she’s spent “a gazillion hours” working on the cemetery project since 2015. That work has included both a task force and a transition committee.

Parver said the JCBA’s mission dates back to societies in the 1840s and 1850s that offered Jews free burials.

“There’s a lot riding on this organization [JCBA] preserving the Jewish past,” Parver said. “There’s nothing more important than that.”

Kushner, a longtime Federation volunteer, also worked on the JCBA/Federation partnership. He said the move follows reorganizations of cemetery groups in places like Boston and Cleveland.

“The Federation really had the foresight to address an obvious need that wasn’t being addressed – abandoned Jewish cemeteries and cemeteries that were about to be abandoned,” Kushner said. “Ultimately, the goal is – a lot like the Boston model – for more cemeteries to be managed by the JCBA. They will maintain the cemeteries and give them the dignity and the care they deserve.” PJC