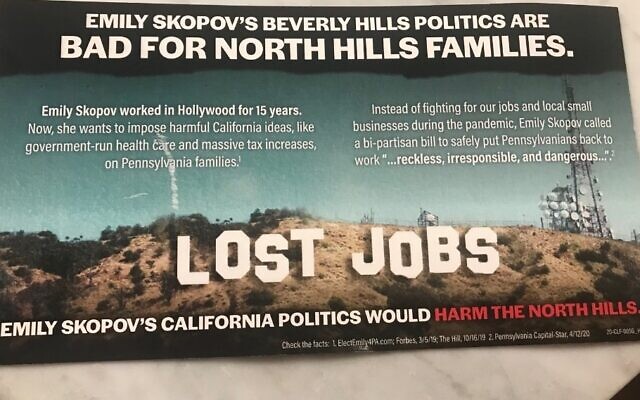 A Jewish statehouse candidate in Pittsburgh’s North Hills is under attack through mailers some say cross the line between politics as usual and noxious nativism and xenophobia.

Emily Skopov is a Marshall Township Democrat running to succeed former Republican House Speaker Mike Turzai in District 28, which includes Bradford Woods, Franklin Park, and Marshall, McCandless and Pine townships. Turzai stepped down from the seat after nearly 20 years earlier this year to pursue opportunities in the private sector. Skopov now is facing Rob Mercuri, a Pine Township Republican, in the open race this November.

A number of recent mailers from a Pennsylvania political group are stirring the pot in the hotly contested race. Those mailers repeatedly attacked Skopov’s career as a Hollywood scribe and questioned her “Beverly Hills politics,” which she said is a dog whistle reference to her Jewishness. Skopov, for the record, never lived in Beverly Hills.

“I think ‘Beverly Hills’ has always been a dog whistle both for affluent Jewish people and for wealthy Jews in Hollywood,” said Skopov, who has penned scripts for television and film. “This is a dog whistle call against my family. [District 28] is a great place to live and these attacks are not reflective of the people who live here now.” 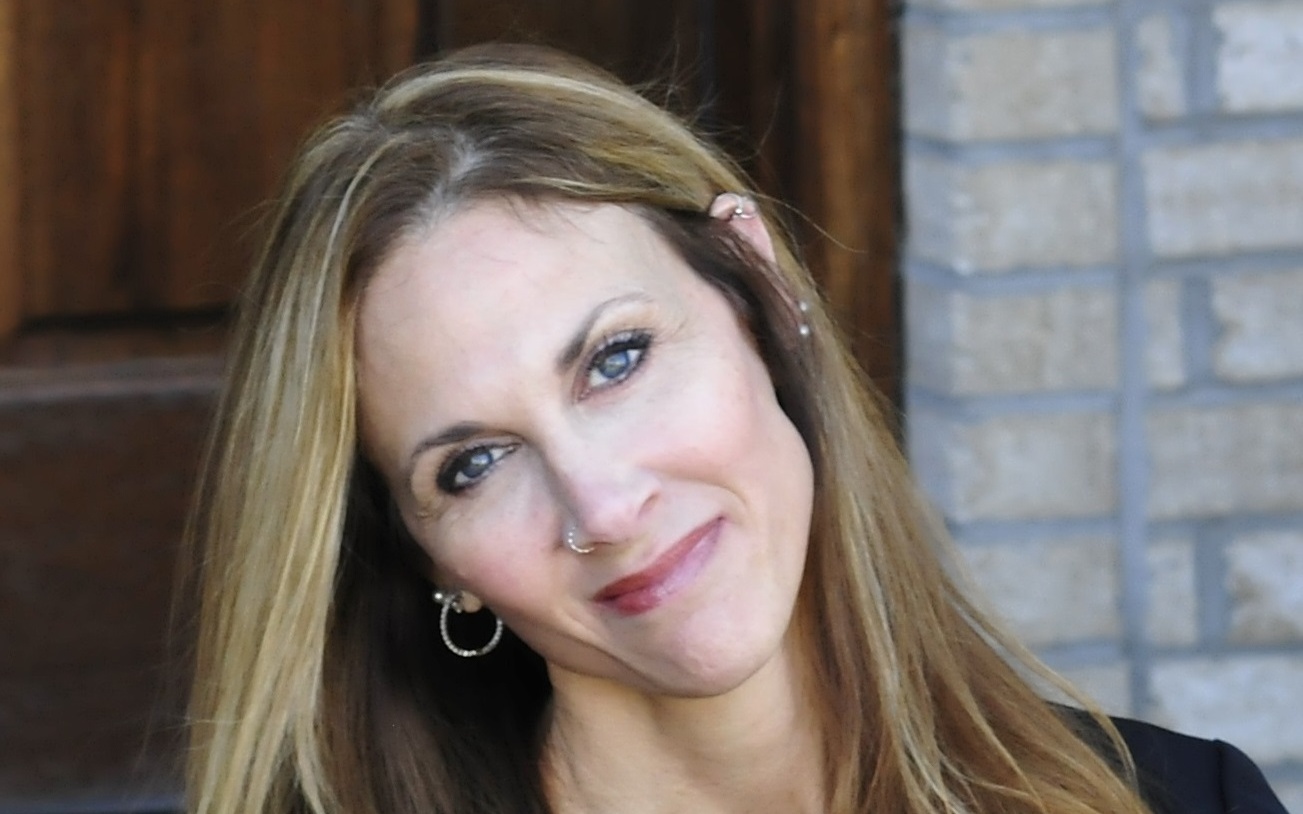 “It’s really sad that he’s ‘othering’ me,” Skopov added. “He’s turned me into a foreigner, which I think is really unfair in a country built by folks who came here from somewhere else.”

Mercuri, the Republican candidate, repeatedly declined to comment on the matter, stressing through a spokesperson that the mailers came from a group called Commonwealth Leaders Fund and his campaign had no hand in crafting them.

Matt Brouillette. a Harrisburg businessman associated with the Commonwealth Leaders Fund, called Skopov’s interpretation of the mailers “ridiculous” in a prepared statement to the Chronicle.

“But we understand why Emily Skopov would want to avoid talking about her statement that a bi-partisan bill safely putting Pennsylvanians back to work was ‘reckless, irresponsible, and dangerous,’” Brouillette said.

The quote is a reference to a headline in a Pennsylvania newspaper in which Skopov criticized Turzai’s 70-word COVID-19 return-to-work measure, she said.

A who’s who of Democratic Party leaders lined up on Skopov’s side last week, as the furor over the mailers unfolded.

State Rep. Dan Frankel, D-Squirrel Hill, who is Jewish, said the mailers didn’t amount to anti-Semitism but they were a tasteless and tone-deaf attack.

“They have nothing else to talk about other than trying to make this person an alien to her community,” Frankel told the Chronicle. “I think this is a tactic that basically says, ‘We don’t have much substance to talk about here.’ We’ve seen this before. And we’ve seen this used against Jewish candidates before.”

“I would love to be surprised by this but this is from the same playbooks our Republican opponents use year after year – these nativist, racist dog whistles,” said Dena Gleason, executive director of the Pennsylvania House Democratic Campaign Committee. “It’s as old as time at this point, when it comes to politics. [For Brouillette] to say, ‘it’s ridiculous,’ that’s disingenuous at best.”

Skopov and others suggested the Republicans were scared because of ground the Democratic Party has gained in District 28 over the past decade. In 2010, the Democrat pulled only 22% of the district vote against Turzai. In 2018, Skopov challenged Turzai and won 46%. Some 67% of county residents supported Democratic Gov. Tom Wolf’s reelection campaign that same year.

The county committees for both the Republicans and Democrats did not return calls and emails seeking comment. The office of House Speaker Bryan Cutler, R-Lancaster, the house’s top-ranking Republican, declined to comment.

A community relations official with the Jewish Federation of Greater Pittsburgh, however, sprang to Skopov’s defense.

“When we see a mailer that talks about ‘Beverly Hills values,’ it’s upsetting many in our community and many outside of it with old anti-Semitic tropes like ‘Jews control Hollywood,’” said Josh Sayles, director of the Federation’s Community Relations Council. “We really wish whoever had sent those flyers was more careful of the language they chose. For many in our community, that may have crossed the line.”

Skopov did not grow up in District 28, instead moving there from El Segundo, California, about 10 years ago to raise her children. She did not mince words about her opponent’s alleged lack of distance from the Commonwealth Leadership Fund.

“[Rob Mercuri] is trying to portray himself as someone honorable while letting someone else do his dirty work – the people of this district deserve better,” Skopov said.

Allegheny County Executive Rich Fitzgerald, D-Squirrel Hill, also said the mailers are counterproductive to the region’s efforts to bring to southwestern Pennsylvania people of all different backgrounds and stripes.

“This plays into that Trump narrative of building a wall, of keeping people out,” Fitzgerald told the Chronicle. “We want to be as welcoming as we can and send a signal that people are welcome here. We need more Emily Skopovs in our region.”

Skopov, for her part, was defiant in the face of the attack last week.

“I think the Commonwealth Leaders Fund is a bunch of bullies,” she said. “And they picked the wrong person to bully.” PJC