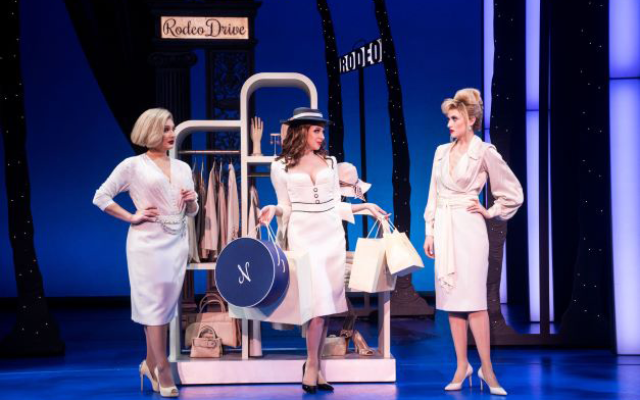 “Pretty Woman” actress Becca Suskauer sees a connection between her Jewish identity and Vivian, the main character in the musical making its Pittsburgh premiere at the Benedum Center on Feb. 1 and running through Feb. 6.

“I love the character because of her free spirit, how funny she is, how she doesn’t feel like she belongs in any of the worlds she finds herself,” Suskauer said. “Throughout it, she perseveres and survives. I think that’s the key word, ‘survives,’ that makes me think of my Jewish identity and the Jewish people.”

Jewish people endure, Suskauer said, despite a difficult past and the rise of antisemitism.

The Penn State graduate is not only the understudy for the role of Vivian, played by Julia Roberts in the 1990 film, but also performs nightly in a few featured roles as part of the ensemble cast.

Suskauer’s journey to “Pretty Woman” began years ago with a singing role in a musical at her preschool graduation at Conservative Temple Beth David in Palm Beach Gardens, Florida.

“I was obsessed with ‘Annie,’” Suskauer recalled. “It was my dream at 4 to play Annie. I begged my teachers and my grandmother, Rose Rosenkranz, who was the principal of the preschool at the time.”

Both Suskauer and her older sister Talia followed similar paths in the acting world — middle and high school of the arts, performing arts camp at French Woods Festival, children’s theater and, in high school, StarStruck Performing Arts Center and Theater in Stuart, Florida. In fact, Talia is part of the touring cast of “Wicked.”

Suskauer followed her older sister to Happy Valley where she earned her BFA in musical theater. During her time at Penn State, she portrayed another iconic character first seen on the silver screen — Vivian in “Legally Blonde.”

Before graduating, she was cast as Cathy in “The Last Five Years,” a role she performed wearing two masks and a plastic spacer because of the pandemic.

“That was crazy,” she said.

“Pretty Woman” is Suskauer’s first job with a national tour. Surprisingly, the actress hadn’t seen the film until the day before her audition, something she views as a plus.

“It was helpful because I had a fresh perspective,” she said. “I’m a huge Julia Roberts fan and Richard Gere fan but hadn’t seen it. I love it now. I absolutely fell in love with it. I was so excited to audition, and once I was named as part of the show I was elated.”

Suskauer isn’t worried about the audience’s reaction to this new incarnation of the iconic movie, noting that the film is more than three decades old, and that the beauty of a live performance is that it encourages the cast to present their takes on the roles.

Still, she said, “paying homage to the original is incredibly important. There are some things where we’ll stay true to the original — but trying to replicate what someone did on screen is difficult.”

The 23-year-old said her parents played a large part in instilling her Jewish identity — and also in helping her and her sister believe they could achieve their dreams.

Her father is a judge in criminal court, and her mother is a criminal defense lawyer and a former president of the Florida bar. Suskauer described her as a “strong-willed powerhouse” and a “very intensely loving woman with a big personality.”
“My mother is a huge part of my Jewish life,” Suskauer said. “We bake challah together and talk about Judaism. She’s the reason I’m a strong Jewish woman.”

The actress misses attending Shabbat services with her family but has found other ways to embrace Judaism while on tour, she said.

“During Chanukah, I bought this little hanukkiah, and I would light the candles every night,” she said. “There are only a few Jewish people in our company, one of them being our leading man and Broadway legend Adam Pascal, who made this cute little Chanukah video with me.”

Suskauer said she isn’t sure what she’ll do when “Pretty Woman” concludes its tour. What isn’t in question, though, is her commitment to Judaism.

And if she isn’t sure what theater role comes next; for now, she’s happy to realize the ambitions of that Temple Beth David preschool graduate.

“My dreams and goals have started to come true,” Suskauer said. “It’s so thrilling and validating. I just turned 23, and it’s very cool and surreal. I think about that little 4-year-old girl, so full of dreams, she was very confident. I’m trying to tap into that little girl at 23.” PJC